After all the setting up, I have been working on the Skyros Men the embroidery. The piece is intended to be stitched in a darning, or running stitch, over three threads, under one, off-set on each row by one thread to produce a tweed effect. The first pair of pantaloons took me about 12-14 hours stitching. 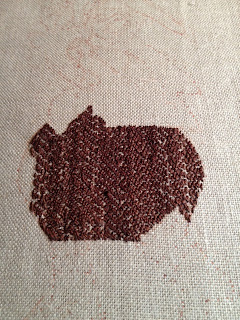 It isn't as even as I would like, and although I have found working at the frame very relaxing and comfortable, and I understand the importance of running stitch in Skyros work, I am concerned that I will not be able to sustain counted thread work for this whole project on the 32 thread count linen. The level of accuracy it requires and the difficulty I have seeing well enough to count  over such large spaces for sustained periods, will, I fear, cause me to give up well before I finish. I need to be able to work the stitches as true running stitches, rather than stabbing stitches if I am to work such large areas.

I decided, therefore,  to experiment with changing the stitch as well as experimenting with magnification. I'm thinking I might work a series of different stitches - including chain stitch and Bokhara. I really like this piece, so I hope I can find an adaptation that will work for me. 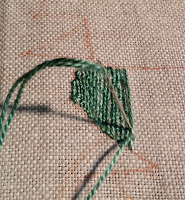 I began my adaptation by trying Bokhara stitch on the pantaloons of the next figure. I tried to keep the couching stitches running diagonally, as the counted running stitches are intended to run. 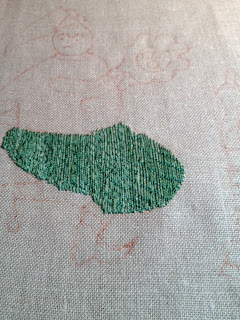 I am much happier with this outcome in terms of result-for-time-taken to produce it. This I can manage, so now will look for other stitch variations - maybe try a different stitch for each man? I am also going to try using the magnifiers that clip to my glasses.

It makes a huge difference to have extra help to see fine work. Do try the readers. You can see some of my experiences on my most recent blog.

Many thanks for this comment, Lyn, and also for your blog post. I have been using the clip-on magnifiers - more soon.

32 count is fine and hard on the eyes. I have a magnifying ring that I wear around my neck for fine work but not sure even that would help with the stitching. Best of luck. Thanks also Jillian for your comments on my blog, there is no email address to thankyou so thanks are pouring out via your blog!