Red, Red Robin Panel 5: What if I've been blue, still I'm walking through fields of flower

I thought the lovely blue on this panel was most appropriate for the next line in the song. I considered a range of cottage garden options for the panel, but settled on using a photograph of Western Australian wildflowers as inspiration. The photo comes from Ross Tours. 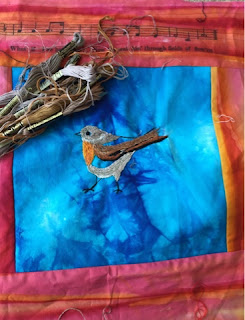 I'm working on alternating the male and female robins from panel to panel. This one is a female. I had to go and buy more stranded thread in browns and greys - it's not a colour range I have used extensively and I need variegations for the female robin. 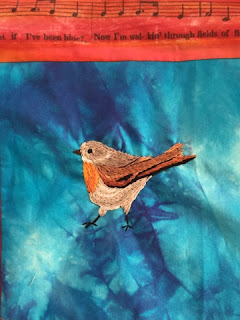 She really stands out against the blues. 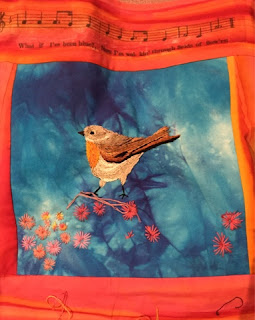 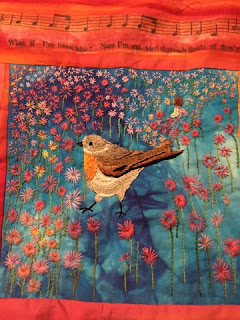 I used a wider range of pinks than the photo and included fewer stems but kept the perspective of larger foreground and smaller background flowers. 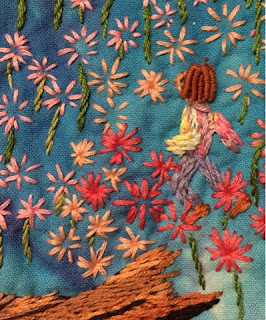 There is a little person walking through the field. 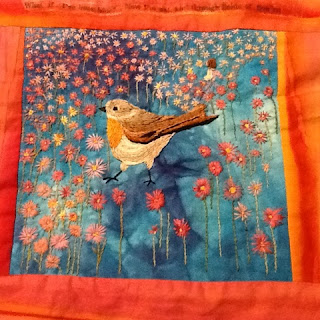 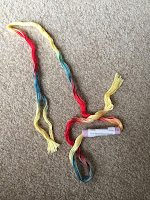 I have moved from using machine thread to hand-quilt the panel borders to using three strands of variegated stranded cotton. I rather like the effect. Its more Japanese chiku-chiku and less Kantha.

Posted by Jillian at 10:13 AM 2 comments: Links to this post 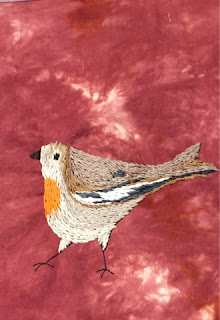 I'm working at the moment on a plan to alternate the male and female Scarlet Robins on each panel. This may change as I see how they are fitting together. This one, however, is a female and I worked her in stem stitch again. 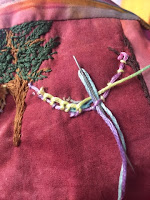 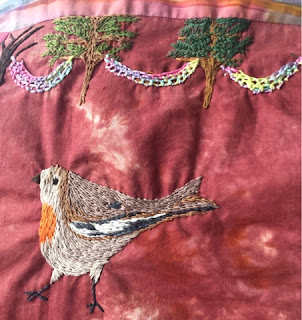 To tell the story I began with a series of little hammocks slung from trees across the top of the panel. The hammocks are worked in needle-lace. 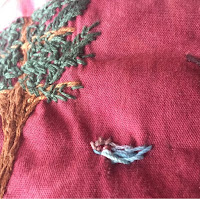 Underneath each hammock is the shape of a tiny person. The hammock can be lifted to reveal the sleeper underneath. 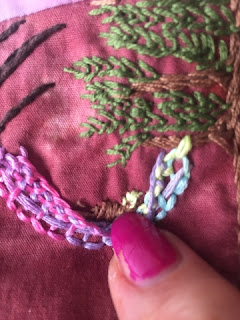 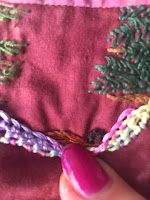 The more difficult part was embroidering sleeping people inside buildings. I hesitated between a home and a dormitory - such as a camp or shearers' quarters. In the end I went for a hybrid.I tried for straight and neat - but ended more Grandma Moses! This bit is shapes only - nothing to lift and reveal the sleepers. 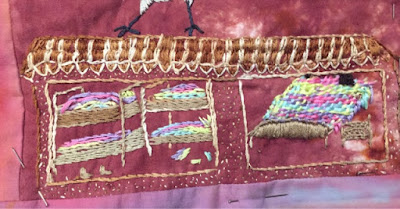 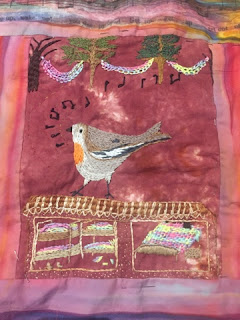 The birdsong in this panel is my attempt to capture the song of the Scarlet Robin itself. I am not a musician and do not read music more than knowing one note is higher or lower than another. I found some recordings of Scarlet Robin birdsong  and played them over and over, trying to gain a sense of the way the notes might flow.  This time I worked the notes and sound waves before I added the panel back!

I also stitched over the words on this panel. I'm not happy with the 'take' of the printed words. 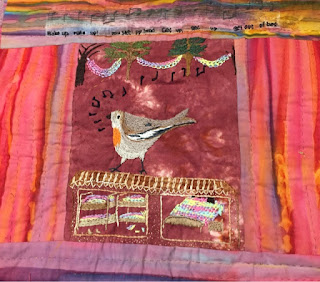 Finally I added the back panel and quilted lines around the borders of the panel. It's a bit wonky and crude but I think the story is there.

I'm enjoying this move into what is turning out to be narrative embroidery.

Red, Red, Robin Panel 2: "There'll be no more sobbin' when he starts throbbin' his own, sweet song". 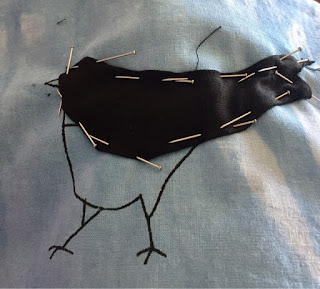 For the second panel of my Robins quilt (chronological not stitching order) I tried appliqueing the bird. Having seen the Tentmakers of Cairo documentary late last year, I wanted to try adapting their appliqué method. Mine is called 'Tentmakers with pins'.
I used, as the tentmakers do, a rough-cut piece of fabric, but kept it small and used pins to hold it roughly in place, adjusting as I went. It worked quite well. 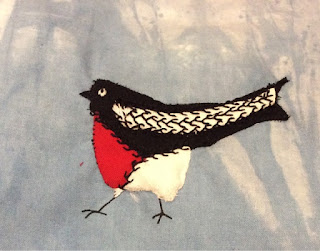 Once I had appliqued the four pieces in place I embroidered the edges and wing. I am very pleased with the result. It will only work, I think, for the male bird. The complex browns of the female bird would only work if I found a fabric that matched the subtlety of the bird. 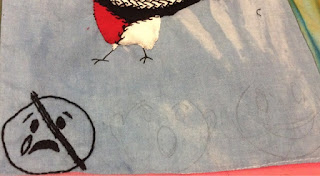 I had decided from the beginning to try to tell this line of the story using emojis - moving from sad, to 'wow' to happy.

It proved harder than I anticipated. The sad emoji gave me no trouble. 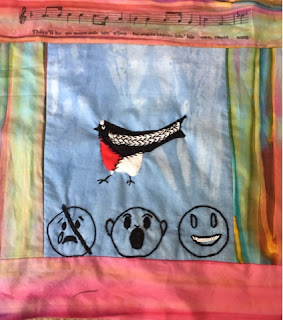 I struck trouble, however with 'wow'.


Getting that open mouth and eye look was not easy. I tried outline only, black fill, black fill with white inside then back to all black. I couldn't get the exact shape I wanted. 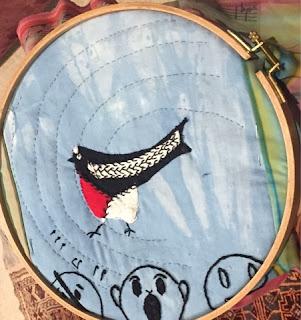 In the end, I went on to add the sound waves and notes that complete the story and voila! it lifted the emoji to the message I was after. 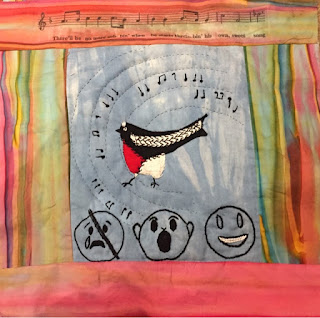 The effect is exactly what I wanted. The mistake I made was to add the backing and quilt the sound waves through all layers. I'd have been better to have kept the back consistently stitched around the bird shape and border only. I do, however, have a Plan B. 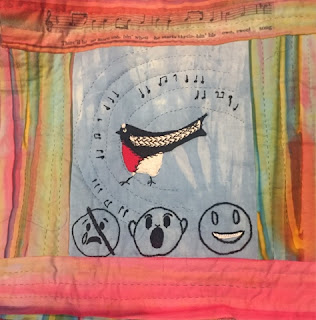 Posted by Jillian at 10:55 AM 3 comments: Links to this post 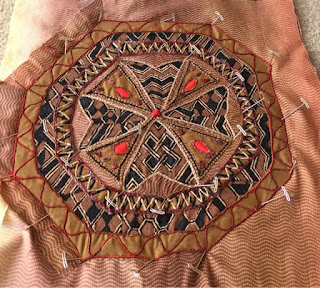 When I got home from holiday, with my African Tribal piece from the Embroiderers' Guild Summer School embroidered, I set about blocking it. As it was a 100F day in Adelaide, I pinned it out on the carpet and sprayed it with water until saturated. Even with the aircon on, it dried completely in 2 hours and came out beautifully flat. 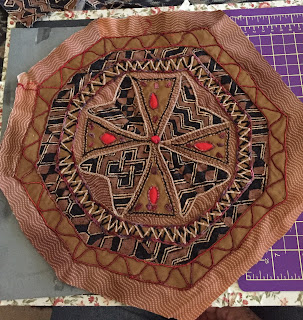 I trimmed the edges - realising as I did it, what a poor job I had done of getting the outer edges of the octagon even. This is because, although I measured and drew an initial template for the Maltese Cross, I did not measure the lines extending from the Cross to the outer edges, but simply extended them as I went. I don't mind the somewhat haphazard folk-art look, but it's a lesson for future work of this kind. 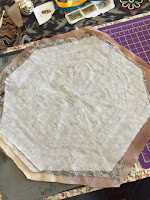 I added some cotton interfacing on the back, to strengthen those exposed sections of the bottom layer of fabric before turning under a hem all around. 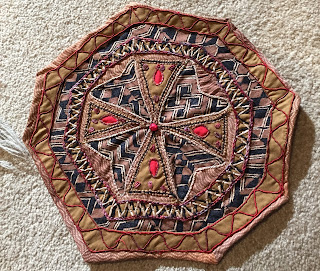 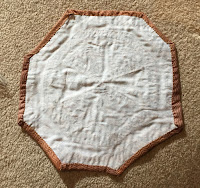 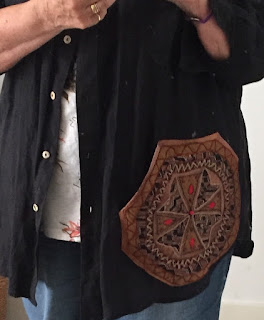 I had designed this piece to be added to clothing, but it had more than doubled in size from my original concept. I tried it unsuccessfully on various pieces of clothing before hitting on an black linen shirt that I usually wear open over tops. I decided the piece can serve as a pocket. I stitched it on by machine, reinforcing the opening, but using a long stitch elsewhere so I can remove it easily if I change my mind. The downside is that being linen, this shirt requires constant ironing! 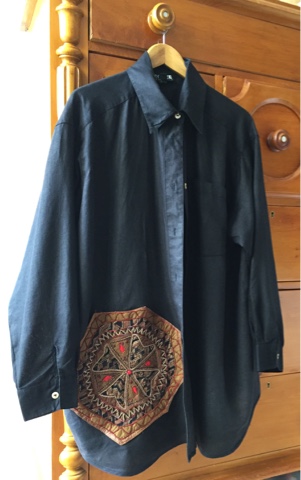 Posted by Jillian at 12:06 PM 4 comments: Links to this post