As I expected, the construction required patience and logic. Every piece is basically a square or rectangle and there isn't a lot of form-fit in the final product. 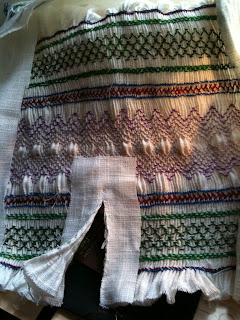 You begin by creating a placket on both the front and the back, through the smocking.

You then stitch the shoulder pieces to the fronts and backs, lining them up with the outer (shoulder) edges to create a kind of strap on either side, joining the front and the back.


You construct each sleeve using a square of fabric as a gusset and an additional long thin strip of fabric that gives room for movement. The sleeve is then joined to the shoulder strap and the sides of the front and back panels. There are a lot of long straight seams, traditionally joined by encased flat seams. I followed tradition and used this method. My mother was partial to using this method for seams. Perhaps it is very English. 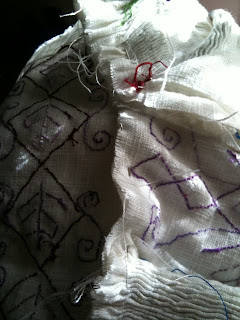 
I finished the sleeves and the hem with feather stitch, turning the edges to the right side.

The result is comfortable. It won't win any fashion awards, but it is an interesting "ethnic" garment. I figure that a smocker ought to make an English smock sometime in her smocking life, if only to understand the principles of construction. 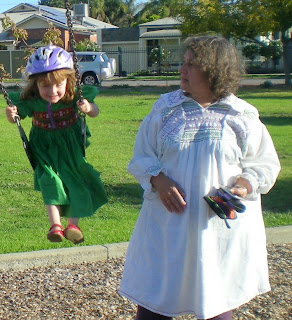 It will always look a bit 'fit-where-it-touches' because of the amount of material and the nature of the slashed neckline. 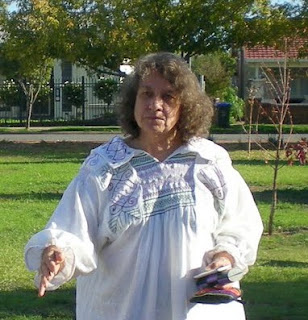 
Posted by Jillian at 4:12 PM 3 comments: Links to this post

I have now finished most of the embroidery for my smock. There is a bit I will need to do when it is sewn together. I'm hoping I can sew it together over Easter. 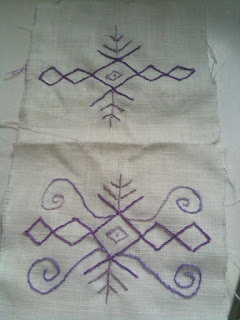 I began shoulder pieces. The lower one is finished and here the top one is partly done.


These connect the smocked fronts and backs.

I then embroidered the side panels on the front. As with the other pieces, I used the traditional design suggested in the pattern and the colours of the smocking. I used thread I already had and, of course, ran out part way through. Hetty's Patch and Country Bumpkin were able to match thread close enough to work with. 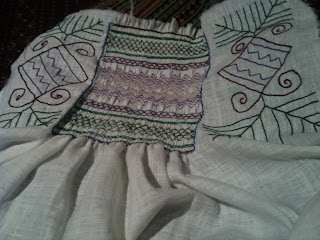 Tonight I have finished the two collar pieces, one of which is shown here. 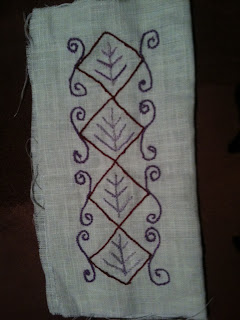 Now the real challenge - construction - begins. Can I piece it all together (and make it fit)?
Posted by Jillian at 3:41 PM No comments: Links to this post

Email ThisBlogThis!Share to TwitterShare to FacebookShare to Pinterest
Labels: embroidery 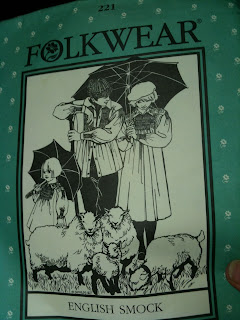 More than six months ago I cut out and pleated an English smock for myself, using a pattern I got online from Can Do Books and Patterns in Melbourne - www.candobooks.com.au .  I used some more of the white linen-like fabric I used for the top I smocked for myself in January
(http://jillian-alwaysstitching.blogspot.com/2011/01/smocked-top-for-adult.html ).

I began work on this smock when I finishing the gum-blossom needle book.

As it involves quite a bit of work, I am going to write about it in three parts: the smocking; the embroidery; and the construction. This blog is about the smocking.


It was a bit of a mistake to cut it out and pleat it so long before I began work on it, particularly since the pattern doesn't assume the use of a pleater. Techniques for working with pleaters are a bit different to working with smocking dots.

The back and front bodices are smocked and so are the wrists and the shoulders of the sleeves. With a pleater it is easier to pleat from edge to edge, then remove the pleats you don't need. Six months ago I pleated from edge to edge of both sleeves and bodices, but didn't remove the excess pleats. When I picked it up a week ago I assumed the usual allowance for seams and smocked one sleeve from edge to edge at the shoulder as well as the wrist, and the back bodice right across before realising my mistake. 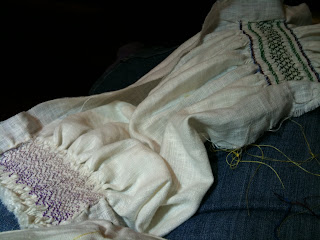 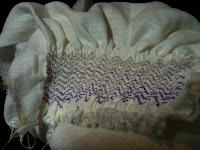 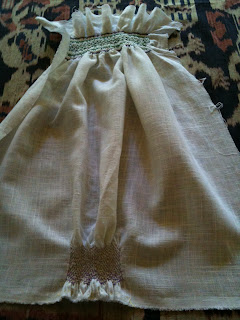 The sleeve at least was easy to unpick! 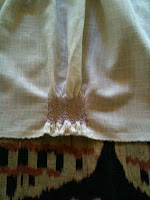 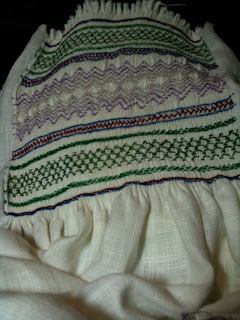 I am not too worried about the back bodice, because it is simple to add a strip to each side. The good thing about traditional smocks is that you can always add in a rectangular strip of fabric.

I have, however,  finished the second sleeve with the narrower panel of smocking and removed some of the pleats at either side of the front panel before beginning to smock it.

The smocking is really the easy bit. A traditional English smock is made up of various sized rectangles pieced together, some smocked, some embroidered, some plain. Working out how to put these together so they fit me- at least loosely - is going to be the challenge.
Posted by Jillian at 11:37 PM 2 comments: Links to this post

Following the success of my Kogin cushion, I have been working on another kit from my stash, flowerpower, from Inspirations 58. The design is by Judy Stephenson and was the winner of the 2008 Flower Power Competition. I liked it immediately, especially since it uses Ghiordes knots, which I had just mastered.

Judy Stephenson has designed it to be quilted and either framed or included in a quilt. I decided to use it as the cover of a large needlebook to hold packets of needles, along the lines of one I saw at the Embroiderers' Guild Summer School.

A couple of the stitches used in this project are new to me so it has been an interesting one. The size of this project is almost perfect - enough of each technique to provide practice, but not enough to get bored. 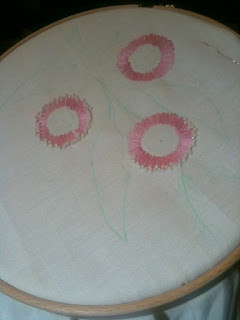 I used a gel pen to transfer the design to the linen. The first steps are straight stitch edging to the three gum blossoms and some beading for seeds. 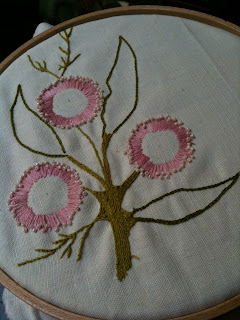 The stems are then filled in stemstitch and the large gumleaves outlined in chain stitch, ready for the leaves to be filled in with detached blanket stitch. This forms a little pocket which is filled with wadding to give a raised effect. I had to restrain myself from really stuffing the leaves!

This is a stumpwork technique and I had not done it before. It reminded me of Prue Batten's books - the idea of a whole book being hidden behind the three-dimensional embroidery of a large project. 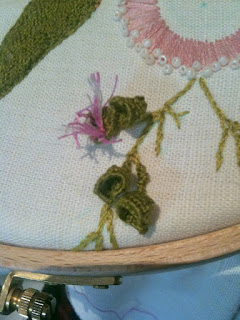 The gumnuts are made using a couronne, another technique that was new to me. The gumnuts are shaped around a knitting needle, building up a shape with rows of detached blanket stitch. 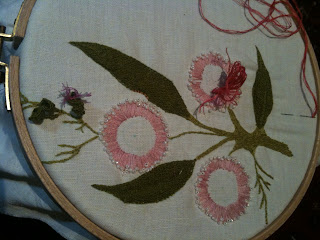 Ghiordes knots are then worked around the blossoms, on the inside of the straight stitch. 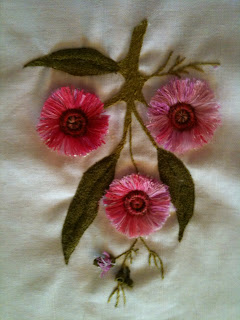 The centres are made separately and inserted. They are embroidered as a blanket stitch wheel on interfacing, using two strands of variegated pink mixed with a strand of brown, then attached to a small plastic ring covered in detached blanket stitch.

The Ghiordes loops are cut and brushed up.

I am pretty pleased with the result.

The instructions are for quilting and framing the piece - or suggested as a block in a quilt. I turned it into a book for needle packets, by quilting then lining.
It is my first attempt at machine quilting. I have never sewed before with the feed-dogs down. Once I got the hang of it, it was amazing fun - moving wherever you like across the fabric. It took a bit to get the stitch tension right. My first effort produced loops at the back. 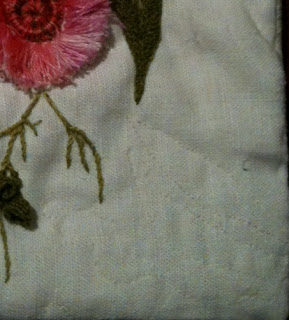 Eventually I got it. I used the designer's suggestion and made rough leaf shapes.

As lining, I had intended to use some cotton with Australian wildflowers, but decided the colours were too strong. I settled, instead, for the piece of handprinted fabric I had bought last year from Ink & Spindle at the Adelaide Bowerbird Bazaar (http://jillian-alwaysstitching.blogspot.com/2010/10/adding-to-my-stash.html)
. 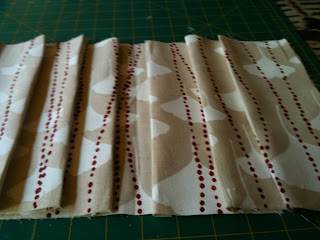 The shapes were slightly reminiscent of the gum blossom and the colours were complimentary.

The width of the fat quarter I had was perfect, and the length gave me enough to cut and edge strips to form the pockets I wanted.

I stitched the strips down, then across to form pockets. I then put the right sides for the cover and the lining together and stitched around three sides, turned it inside out and hand-stitched the remaining side. 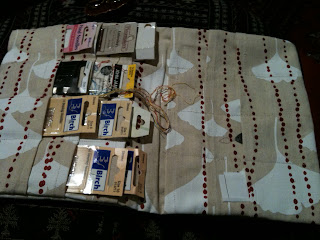 I now have convenient storage for packets of needles and a place where I will see my gum blossom embroidery without exposing it to too much wear and tear. 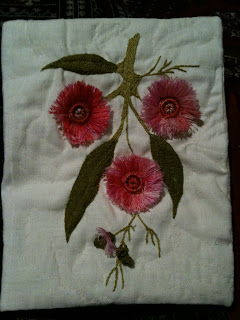 Posted by Jillian at 10:44 AM 3 comments: Links to this post