Fionn has been bringing his marbles around when he comes to hang-out with Jim some Sunday afternoons. I saw some old marbles on eBay and bought them for him, along with a small bag of hand-made marbles from England. My knowledge of marbles is dredged up from memories of my brother playing as a boy, but I love the look and feel of them.

This of course, led to a bag for the marbles. It also allowed me to play with using a photograph for an embroidery design - something I've wanted to try for a while. 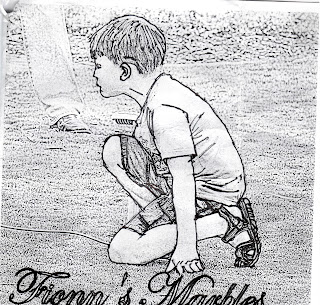 I began with a photo of Fionn kneeling in a park while playing with an iron man toy that flies into the air.

I used the outline tool in iPhoto, then printed the result and used it to trace an outline on to fabric.

I also added "Fionn's Marbles" in script using the Picassa tool, and traced the words. 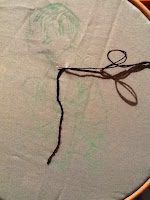 I mounted the fabric in a hoop and used some browny-black variegated perle 8 thread that I got from Hetty's Patch a while ago, to embroider the outline in the style of redwork. 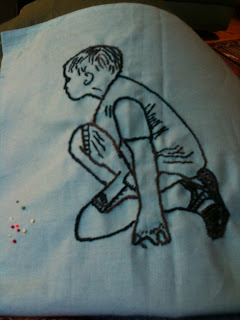 I was especially pleased with the sandal! 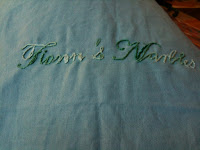 I added a few french knot
marbles
and put the words on the back of the bag.

I used a pale green cotton which took the marker quite well and lined it with a strong dark green broadcloth I also had to hand, then filled it with the marbles.

It has proved to be a popular and useful present! 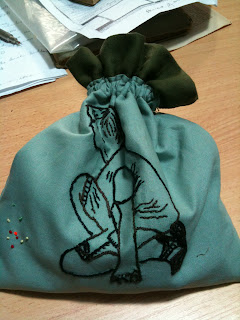 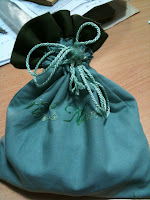 Jim bought Fionn a very nice blue chambray shirt for his birthday and asked if I could embroider something suitably western on the pockets. 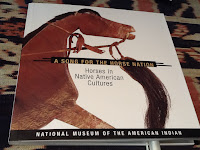 I dug out the book I bought at A Song for the Horse Nation exhibition at the Smithsonian Museum of the American Indian in Washington DC. It has lovely examples of motifs that I hoped I could use one day.

I drew a horse and rider based on an embroidered jacket in the exhibition. The original had two two riders - more than I thought I could manage on the pocket. It did remind me of the Rolf Harris song about two little boys sharing a horse. 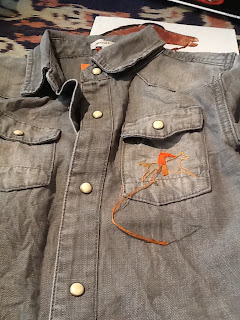 I used threads I had in my stash - indeed, some I had in my needles left from other recent projects in ochry sorts of colours!


Stitching inside the already made pocket was a bit awkward, but not too bad. I used mostly stem stitch with the odd french knot for eyes.

On the second pocket I made a star, also based on a repeated design from the book. 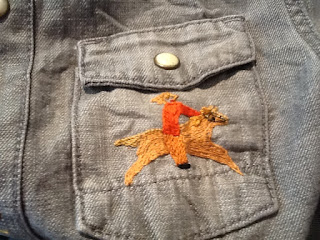 I really like these simple, fairly quick embellishments.
Posted by Jillian at 8:31 PM 2 comments: Links to this post

I have had Val Pierce's Knitted Mug Hugs for a few months, waiting for a reason to try out some of its patterns. One of my daughters recently moved into a new team environment in her work, so I thought I'd take the opportunity to use the book and make some celebratory mug hugs. 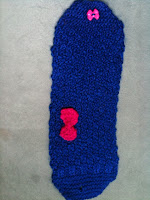 I began with a simple moss stitch one, decorated by a nifty little knitted bow and secured with a button shaped like a bow. 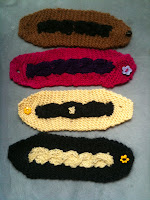 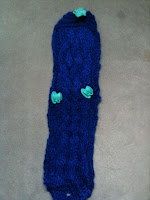 I did one with a double cable closed with a teapot button. I added a couple of extra teacup buttons to complement. On the whole, I avoided using buttons as decoration. One of the attractions of mug hugs is the pleasant feel; and buttons seem to me to get in the way of that. 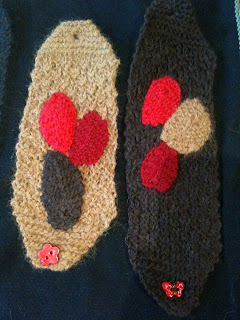 Autumn leaves were fun to do. The colours here are not true - the grey is really brown. I like the effect of this one. 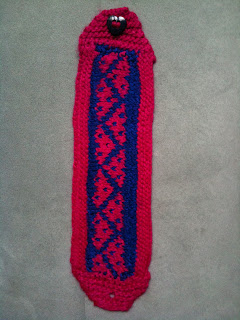 The jacquard one is very pleasing to do - but not, like most of the others for doing while watching TV. 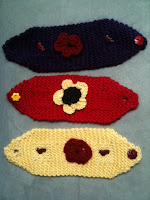 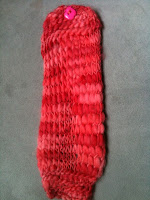 I also enjoyed learning to make the flowers for these ones. I added a couple of tiny bird buttons on a couple of them.


One of my favourites is simply knitted in stocking stitch, using a nobbly wool-acryllic mix that gives differences in texture and shading. 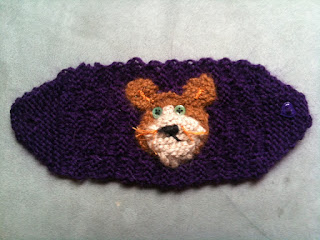 The  pièce de résistance  is what is meant to be a cat. I decided it look more like a mouse and fiddled a bit with the ears. Now it looks like a startled and not-too-bright dog!


I think I am a bit mad, playing with these, but it has been quite a bit of fun.

Are mug hugs useful? I am not sure they will be around as long as tea cosies, but they are even faster to knit!
Posted by Jillian at 11:38 AM 2 comments: Links to this post

I needed a bit of thinking and stash examination time before I could complete the Native Colour bag project. The kit for this came with a substitute fabric. There's nothing wrong with that, but I didn't like the match. The original was pinks and browns and the substitute was green. I thought it needed a bit of red.

I have quite a few pieces of cotton fabric with native flowers on them, but they were a bit overwhelming. I settled, in the end, for a piece of linen from Ink & Spindle - their 'flowering gum in red, orange and stone'. 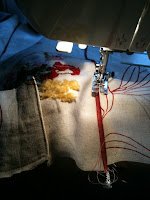 I took my time and measured as carefully as I could. The construction was then fairly straightforward. Both the osnaberg and the linen were good to work with, once I got my head around the idea of the construction.

I got one thing wrong towards the end. I didn't understand the reason for loops at the top of the bag and attached them to the outside of the bag rather than the inside. This is the first time I have used plastic boning in the binding at the top of a bag and I assumed the tabs were to hold, or hang the bag, but they are clearly to hold something secure inside, like scissors. I found a webpage for a class Bev Stayner had run in 2007 that showed the loops more clearly - but only after I had finished! Interestingly it shows the loops in the contrast colour, and also shows the tab placed to catch at the front. These variations and reasons for design elements are the things you pick up easily when learning from a teacher and less easily from a magazine. 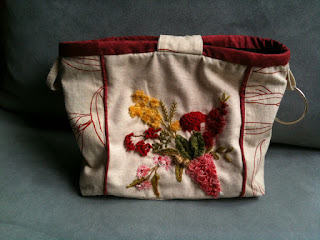 It's a lovely design. The original fabric gives a great look, but the Ink & Spindle linen has a lovely feel and quite a good look. I learned a lot from this project and I hope to get good use out of my very sturdy, adapted bag.
Posted by Jillian at 11:11 AM 3 comments: Links to this post