I've been on a bit of a knitting binge of late.

I had the best part of a ball of wool left from the jacket and hat I knitted for myself. It was  Bendigo Woollen Mills Bloom - a heavy 8 ply and very warm. (It is now on special until the end of the financial year -tonight!)
As I am trying to use up wool as I go and there were a couple of simple things I had wanted to try for a while now, I used up the left-over wool to knit, first, a headband for Veronica.

I was well into the swing of cables, so stuck with that, measured her head and knitted this simple headband, secured by a button.

I'm not sure she will ever wear it, but I have at least tried it out - and used a bit of wool! 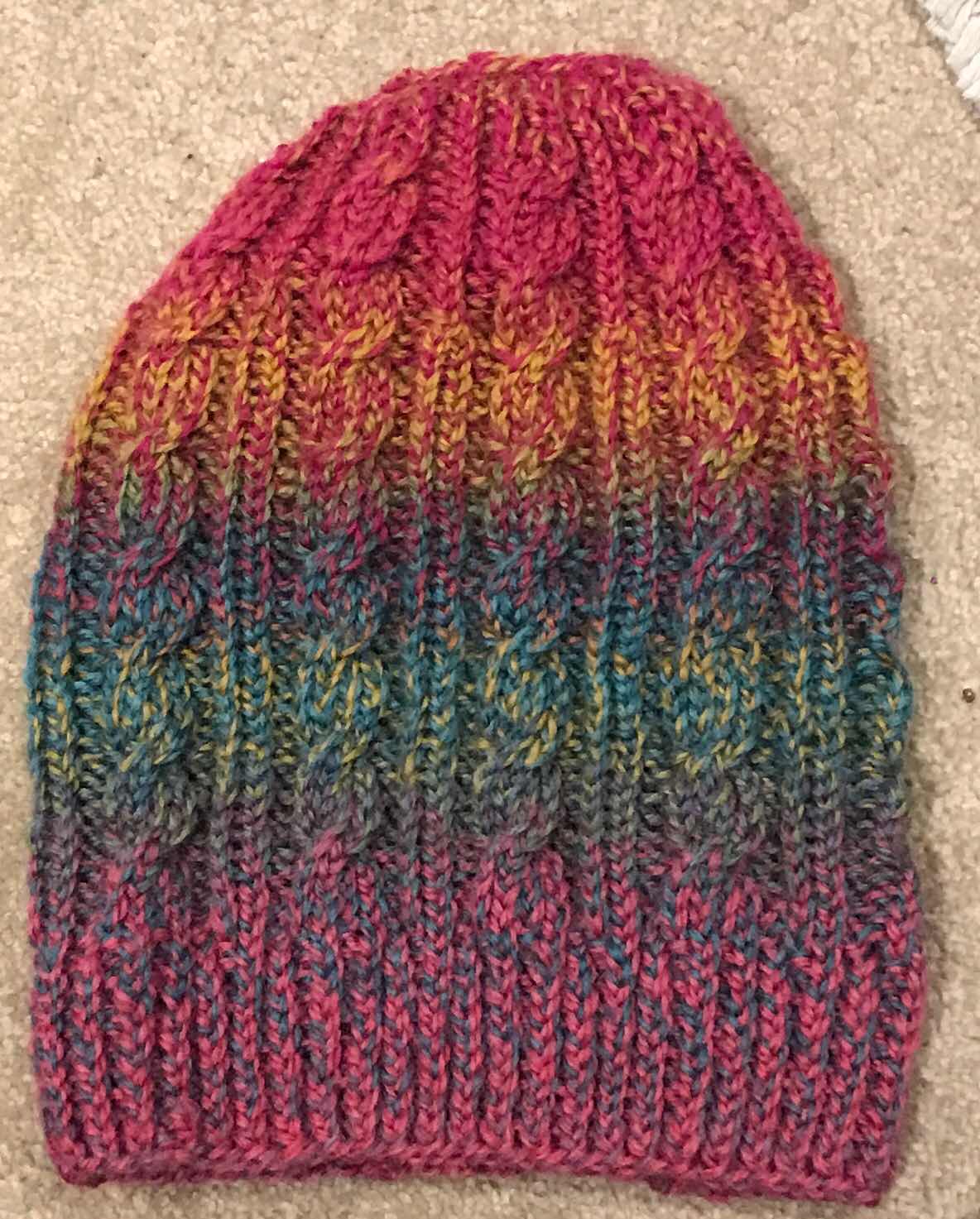 My second project was a messy-bun hat for Niamh. I have always wanted to try one of these too. Again, I stuck to the cables. This was harder to get right.

Before I congratulated myself, the hat turned out to be much too long, so I undid the last rows and shortened it. I think I am more enamoured of messy-bun hats than Niamh, but again, I've made one, satisfied my curiosity, learned a bit - and used up all the wool! 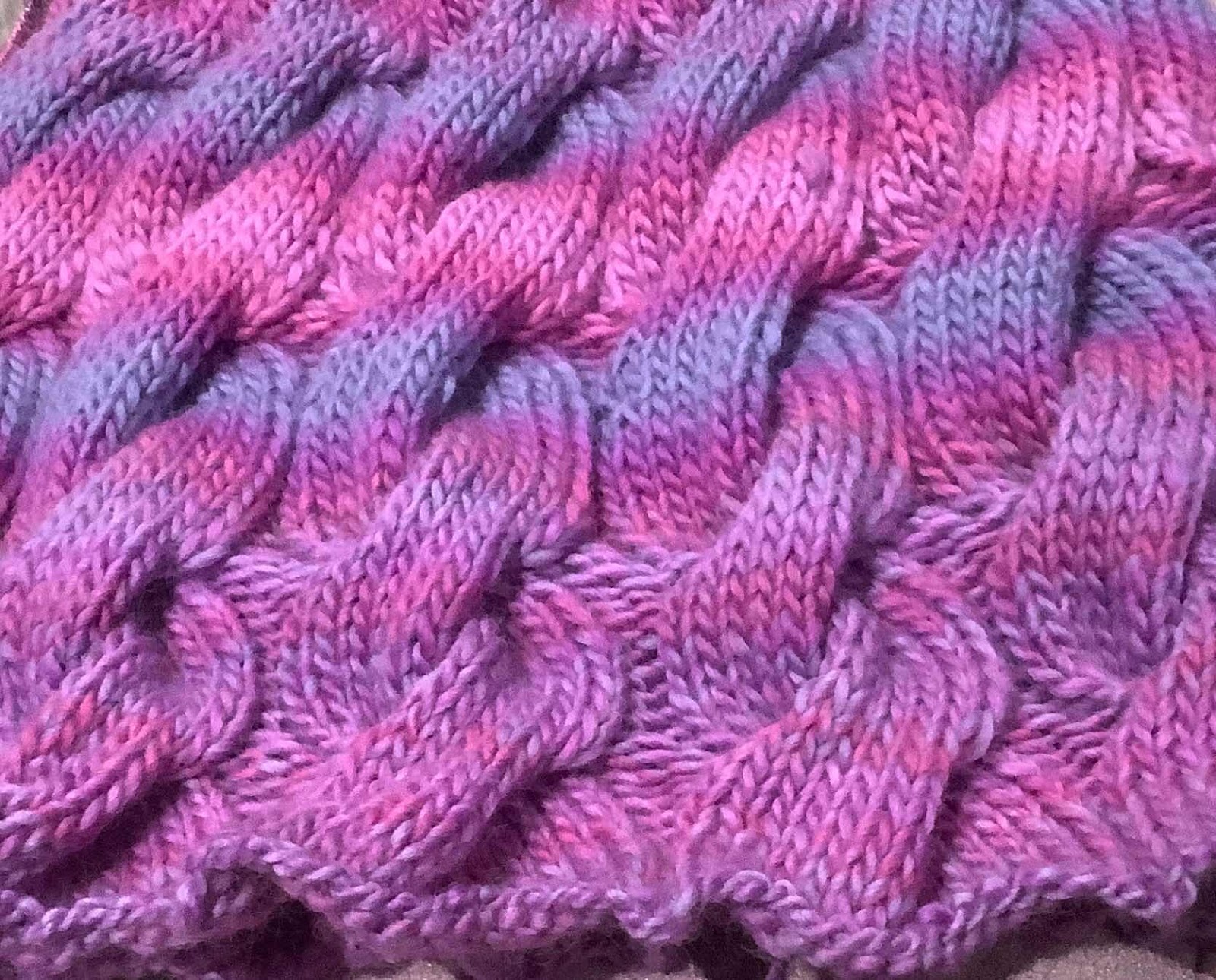 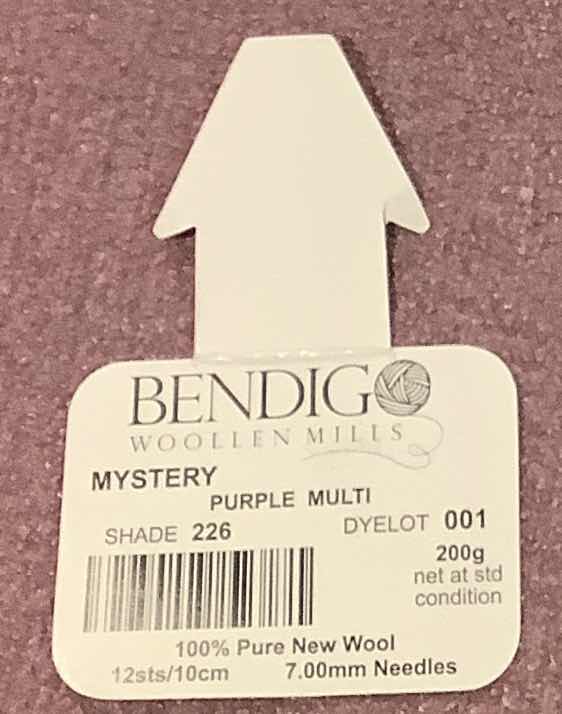 I then launched into using up some of Bendigo's Mystery (no longer available) with a pattern for the Brindabella Cowl from Australian Alpaca Yarn. It's more a poncho than a cowl, and I could see it in this wool, so thought I'd try it out before buying any more alpaca.


Even though Mystery was listed as 8ply and I had 100gm more than the pattern recommends, it felt more like 10 ply and did not reach the length needed to pull over the head as a hood.

It nevertheless looked fabulous - such great texture. I love the really chunky cables and it knitted up quickly in the round. 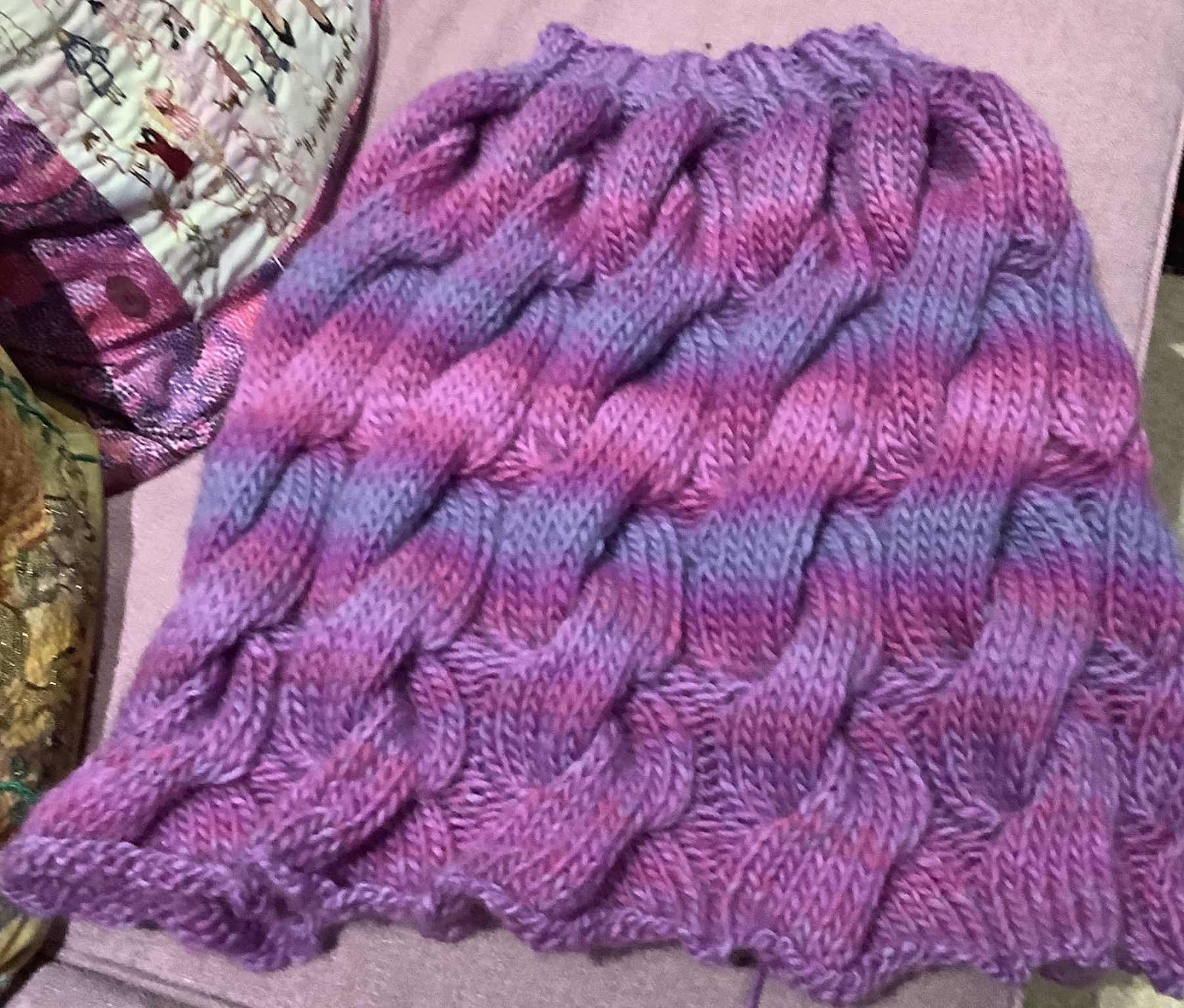 After some consultation with, and modelling by, family I brought it in at the top to keep it snug around the neck and shoulders.
It is very warm. 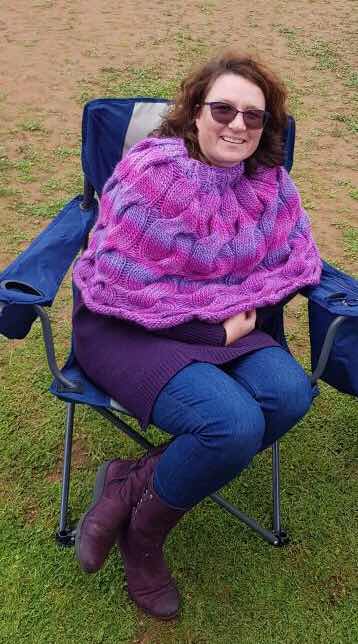 I'm so pleased it proved to be useful for Katherine at the Netball carnival this morning - and the girls are through to the semi-final!

Posted by Jillian at 3:35 PM No comments: Links to this post


A short post to catch up. I am clearing the decks for a long post in the next few weeks - about my piece for the Guild's upcoming SALA Exhibition. 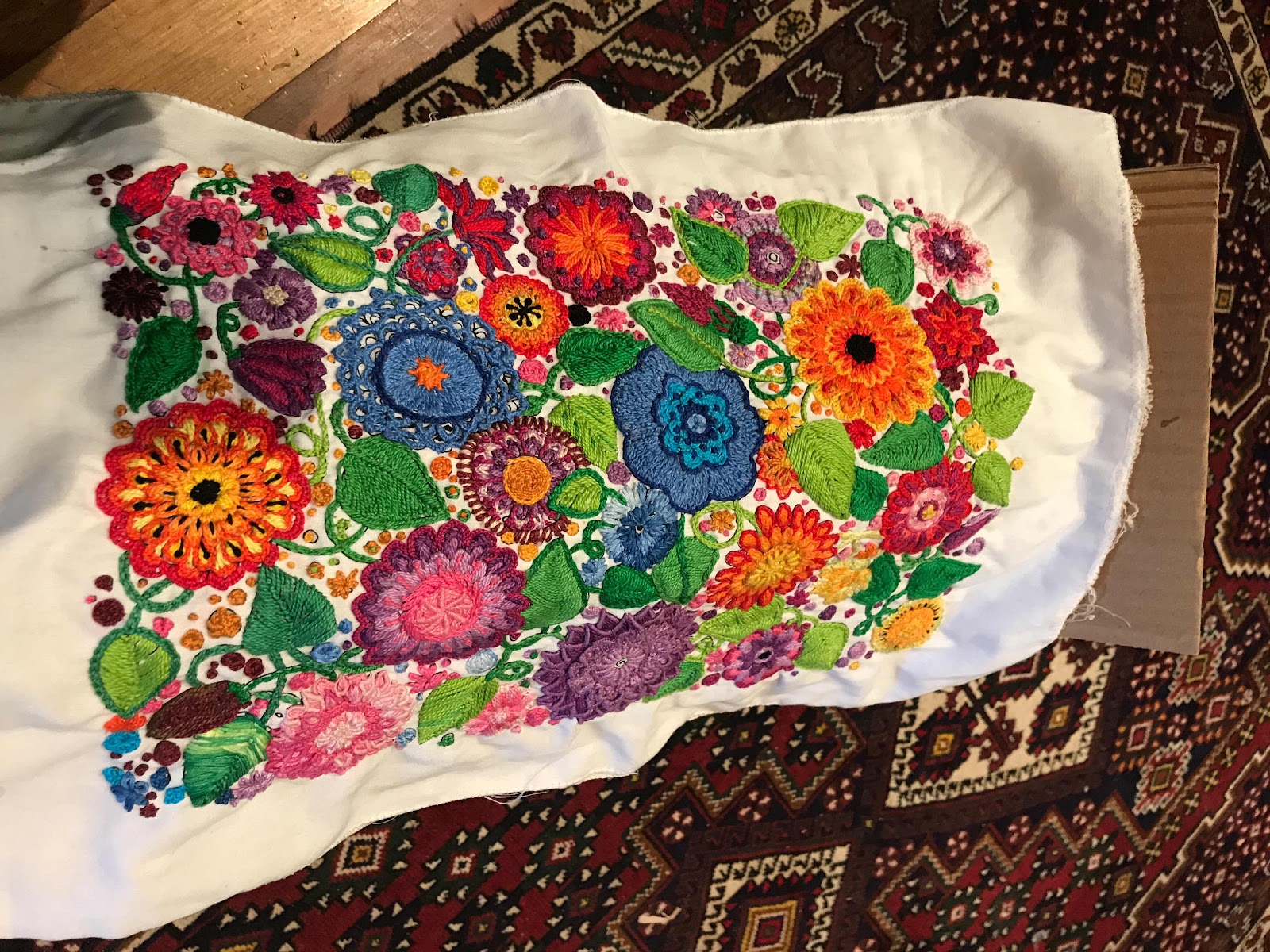 This is the Zenbroidery piece I had not quite finished when I went to England at the end of February. I like Zenbroidery projects when I am travelling, as they are 'grab-and-go', but there was only an hour or so left to do on this one, and it was not worth the luggage space. 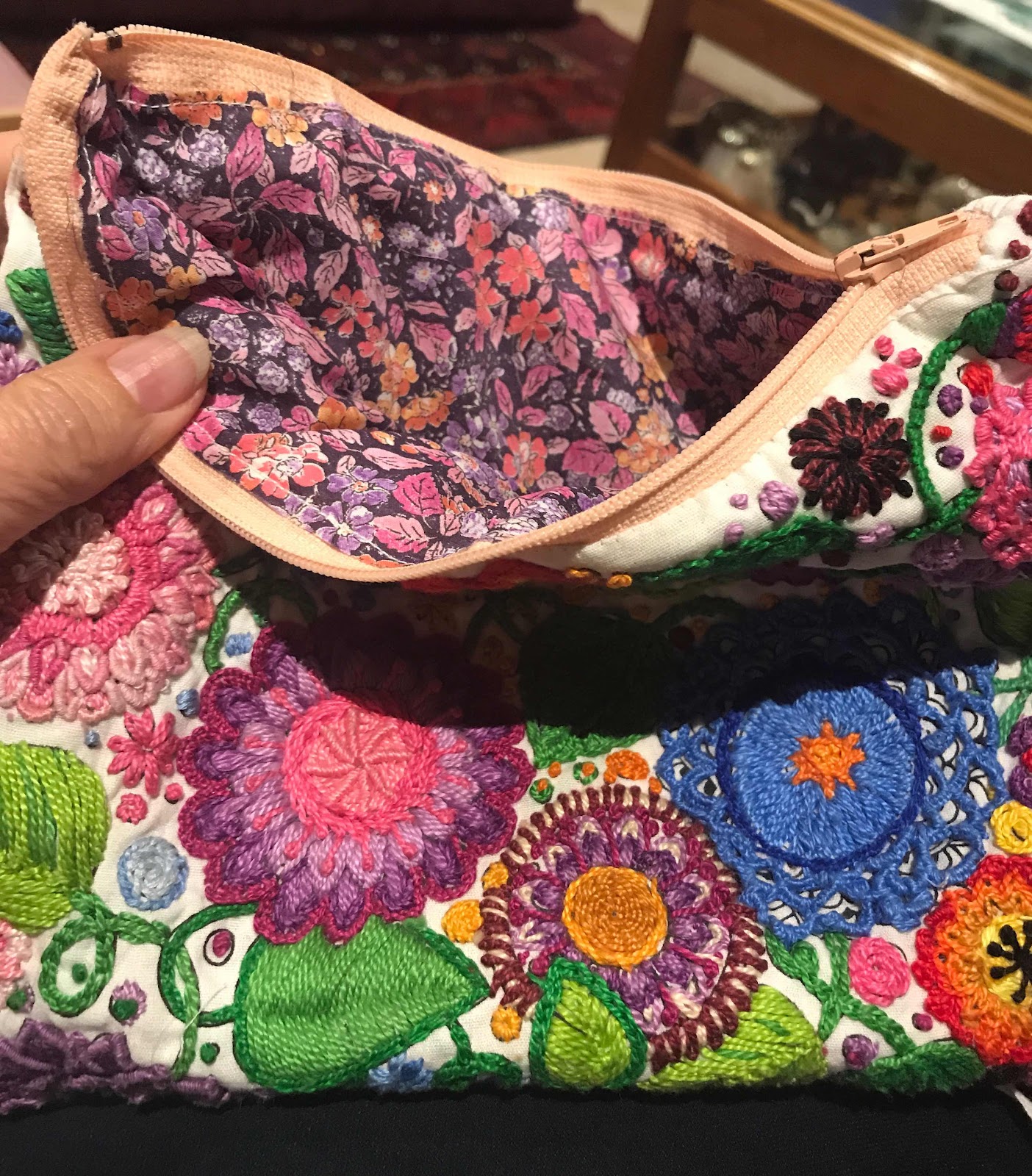 I finished it in the days after my return


I had already identified the lining and zip needed  to turn it into a bag. A piece of Liberty lawn given to me by a cousin as part of a 70th birthday present was pretty near perfect.

I really love the result.


I haven't as yet decided what to keep in the bag, or who might like it as a gift, but I think it is lovely.


I'm sure it will find a good home.


Posted by Jillian at 3:16 PM 6 comments: Links to this post 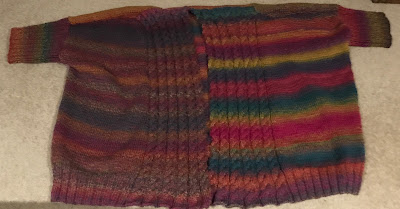 In my last post on this vest I was contemplating the way the yarn variegations had turned out. The two fronts are quite different.  I ruled out re-doing a front - although I had a ball of wool left that might have proved a better match to one side.

This is the finished product. The  sleeves were meant to be about half the length  pictured, but I lengthened them to cover my elbow. 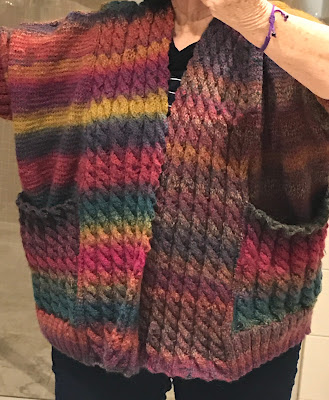 I tried to figure a way of softening the contrast and came up with the idea of pockets. I knitted two large squares in the cable pattern and attached them to the non-cable part of the fronts. 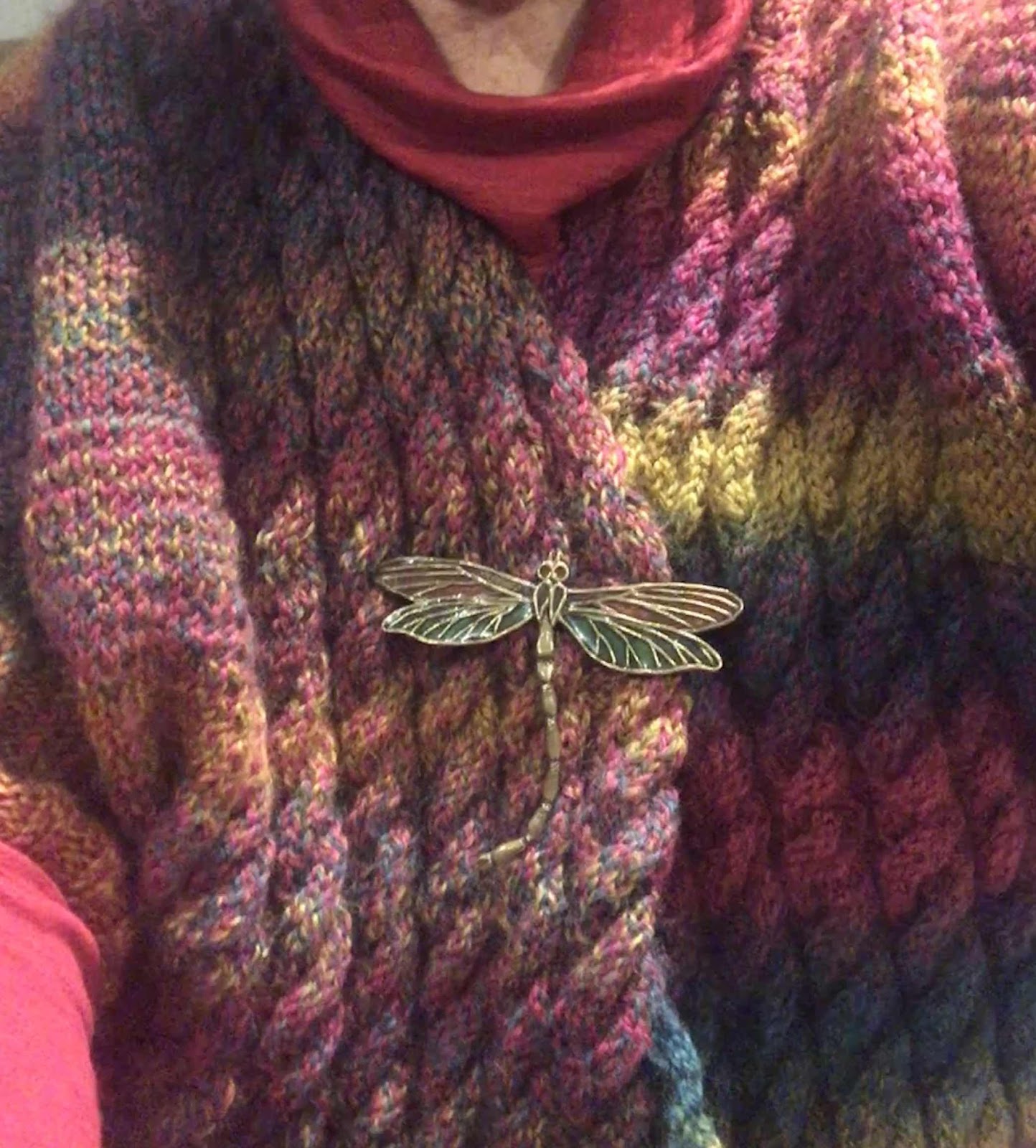 It does modify the contrast - even more so if I wear the vest (which should more properly now be called a jacket!) caught together in the front with a pin or brooch.


It is certainly warm! 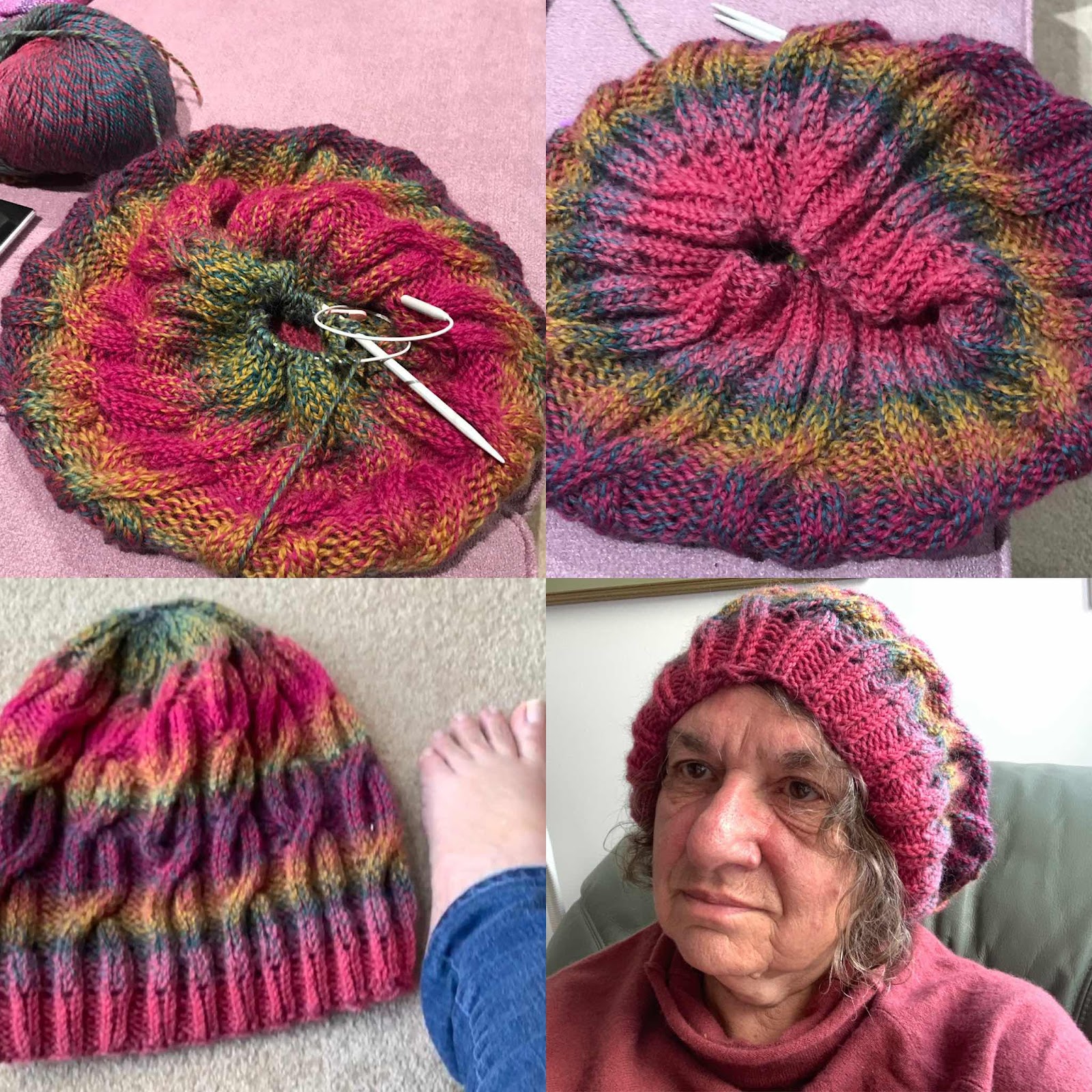 As I had a full ball left over, I found a pattern for a slouchy beret with cable and set to work.


It took  longer than I anticipated. The result was also bigger than I has expected (that’s my size 39-40 foot next to it). I considered turning it into a bag!

However, it is warm and comfortable and my granddaughters approved, so I threaded a round of hat elastic through the band to make it a little tighter, and I’ve been wearing it through our recent cold snap. It’s not glamorous - but it is a bit funky - and this is the weather for it!
Posted by Jillian at 10:01 PM No comments: Links to this post