Recently I put together a first sewing bag for Brigid's eighth birthday. Rather than making an elaborate sewing box - which was my original idea - I settled for making one of the round bags in my earlier post, but adding pockets to the outside to hold various items separate from the space inside. The sewing box can come later if interest lasts.

Brigid likes snakes, so I used two different snake print fabrics, one inside and one outside.  The prints were from the One Stop Fabric Shop. I made the pockets on the outside by lining a strip about half the width of the bag, laying it along the fat quarter for the bag and stitching sections vertically , then gathering the whole piece to the circle base as usual.

This is the result, laden with tools. 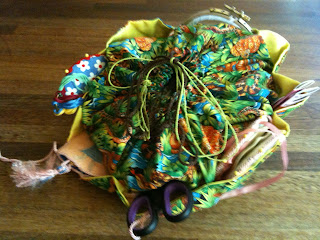 Tools included the Needle and Pin case and thread holder from last week's blog, some needles, a tin of buttons and beads, an embroidery hoop, a thimble, a tape-measure, a selection of threads and two pairs of scissors.

One pair of scissors was for cutting material and attached to a simple tab-keep so the scissors don't get lost. 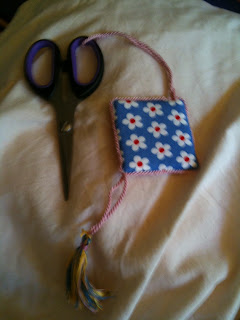 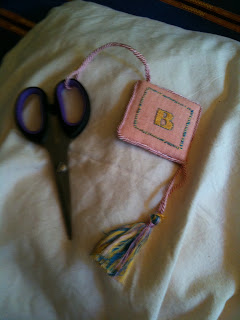 The other was a pair of embroidery scissors in a   scissor-keep embroidered from a drawing Brigid did a couple of months ago and which sits on our fridge. Figuring out what she would look like from the back took a bit of imagination. 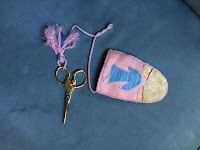 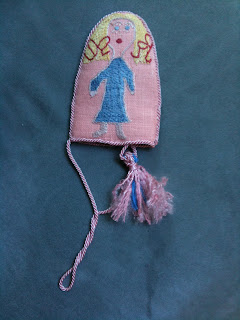 I used chain stitch, stem stitch and Atma stitch - learned on the Ottoman Scarf - for the embroidery scissor keep. 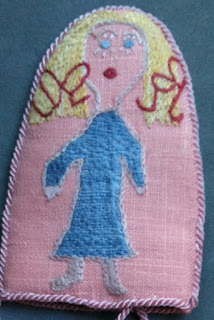 I added another bag, this time purchased from a Vietnamese seller in the Adelaide markets, and hand-embroidered in Vietnam. This bag contained three 'kits' for potential projects.
Stitched cards
This stitchable stationery can be used as notecards. 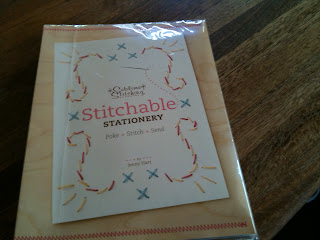 Peg dolls
I put together some threads, wool, pegs, felt, small samples of material and simple patterns to make and clothe peg dolls. 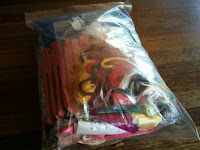 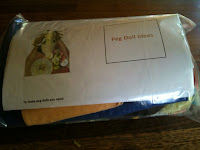 Doiley
Finally, I found one of my mother's yet-to-be-embroidered printed doily/traycloths that requires only lazy daisy stitch and gathered some potentially useful threads to form another 'kit'. 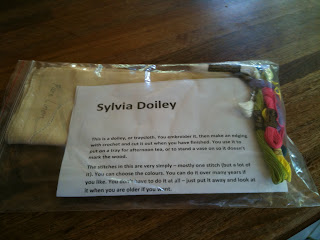 I hope there's a lot of fun in the making  whatever and whenever she chooses.
Posted by Jillian at 3:12 PM 1 comment: Links to this post

The Gift of Stitching

Last year I subscribed to an online counted thread and cross-stitch magazine, The Gift of Stitching. Edited by Kirsten Edwards from Kellyville Ridge, NSW, the magazine comes out monthly and has a wide range of projects, mostly cross-stitch, by designers around the world. Subscriptions are very reasonably priced,even for one year, but you can take out a 10 year subscription for $120 - a great bargain.

Until this month I hadn't tried anything from the magazine, because I had too much on the go already, but I have now worked versions of two of this month's projects.

The first is Pins and needles for a lady by Tanya Haines of Thimble Cottage Designs. It is a circular needle with edges that can be used as a pinwheel. As a pinwheel was, I think, the second project we made in Primary School, when I was 8, I thought I would give this much more attractive and ambitious project a go, using linen and threads from my stash.

It is a long time since I have done a cross-stitch project using linen rather than Aida. It took me quite a while to adjust and there are some irregularities in the counting - before I realised I would need to use a magnifier if I wanted to be anything like precise. Things got better after that and I really enjoyed the project.

I worked the flower on the front and the little motifs on the back in yellow with white centres, the reverse of The Gift of Stitching design. As I didn't unpick, the result of my miscounting is evident in the symmetry. 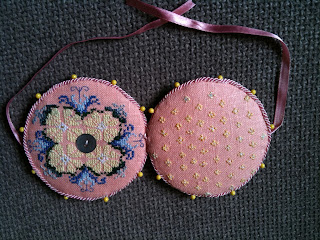 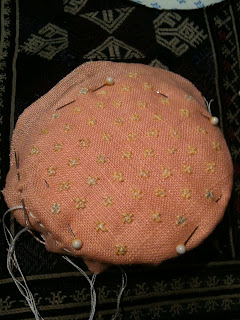 I used a small blue medallion print for the lining, to pick up the little motifs on the back of the needlecase and used backing felt as padding and finer felt for the needle pad. 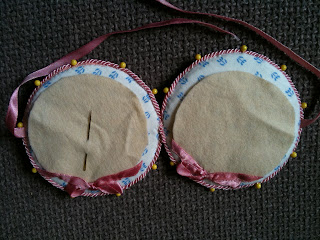 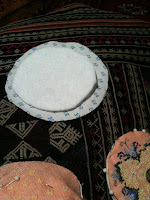 I enjoyed the making. It is satisfying, if fiddly, to embroider, construct and put together such a pretty little thing. 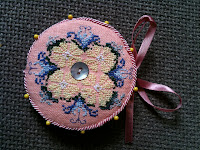 I am pleased with the result - even with errors. I learnt so much doing it and finally got into the swing that means I can do more such cross-stitch projects. 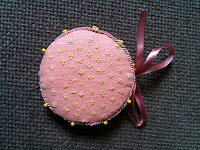 Friendship Bird Floss Tag
So to keep my practice going, I made another project from The Gift of Stitching Issue 60, the floss tag by Michelle Lutzen of Stitchy Kitty. This was great fun, especially after the practice I got from the needlecase. I got quickly into a rhythm. 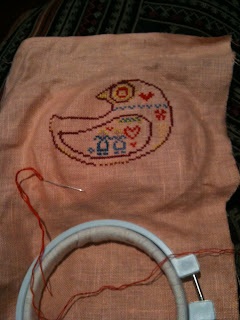 It is a really charming design that made me smile all the time I worked on it. I made a few mistakes but they were very easy to undo without messing up the whole design. I began to see why so many stitchers are addicted to this form of embroidery.

I stitched the ric-rac down all around the edge, rather than pinning it to stand up because this is a gift for a child and I wanted it to be secure. I am very pleased with the result. 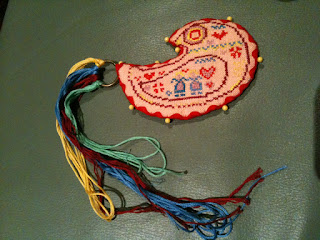 I might try the flowerpot sampler purse from the same magazine issue.
Posted by Jillian at 7:46 PM 2 comments: Links to this post

The stitching books I got for Christmas

My daughter Alison gave me three stitching books for Christmas. Each is likely to produce things that will be the subject of later blogs as they are full of very substantial ideas. 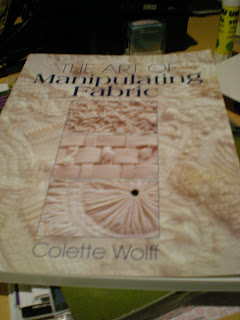 The Art of Manipulating Fabric, by Colette Wolf was published by Krause Publications in Wisconsin in 1996. It is encyclopaedic - giving instructions for every imaginable form of fabric manipulation - gathering, shirring, making ruffles, flounces and godets, pleating, smocking, tucking, cording, quilting, stuffing, using darts and various combinations of these. It has a useful section on Italian smocking and different traditions of surface smocking. It shows different effects of a technique, for example, the effects of different angles of a dart. There is a section on yoyos and puffs and their use as decoration and another on stuffed applique.

There is a lifetime of creative ideas in The Art of Manipulating Fabric. 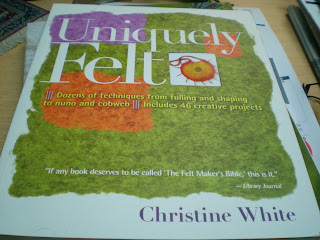 Uniquely Felt by Christine White was published by Storey Publishing in Massachusetts in 2007. It is  a handbook on all kinds of felting but also contains 46 projects to illustrate and help master the techniques. It also features artists who specialise in the techniques. I am not sure that I am going to take up felting, but it is interesting and useful to know about the techniques and how some felt is created - such as jelly-rolled jewellery.

I really like the project-based approach and some of the objects are truly beautiful. Victorian Needlepoint Designs is interesting on a couple of fronts. First, it is a 1975 Dover Publication, and although I have quite a few Dover books that I use for designs, none of them are actually embroidery or needlepoint books. I was unaware that Dover published a whole range of books of designs especially for needlework - most of them, like this one, reproducing designs of older publications.

Secondly, this book has a very clear section on the variations on tent stitch, the standard needlepoint stitch, with explanations about the effect on shape and strength from each stitch.

Finally, a couple of the designs (such as the bicycle on the cover) are really terrific. I'm considering ways of using them.
Posted by Jillian at 10:52 AM 1 comment: Links to this post

I was given some stitched gifts for my birthday in January and some books about stitching for Christmas.

The stitched gifts were made by my daughter Katherine and her family. 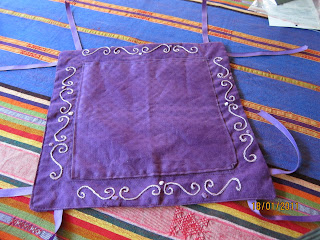 This is a fabric tray, or basket, used for serving bread or other dry food. The underside (left) has a pocket for an insert of thin wood or heavy cardboard. The ties on the corner then form sides. It's very clever and useful. 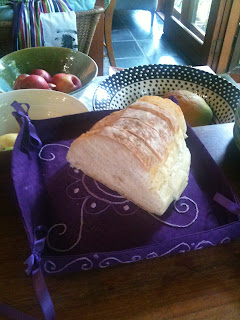 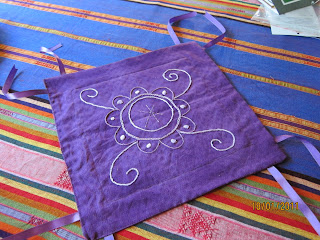 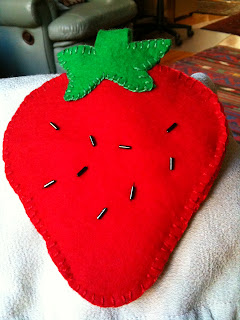 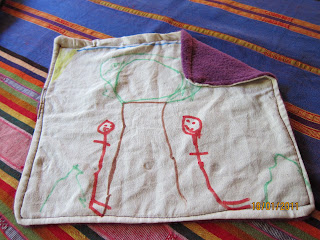 This bright and clever strawberry potholder was made by Brigid, aged 7 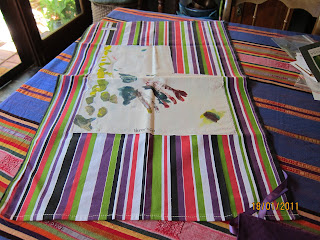 Veronica, aged 3, contributed the drawing to the teatowel above, while Niamh, also 3, illustrated the matching apron below, both of which I believe came from Gaganis Bros in Adelaide. 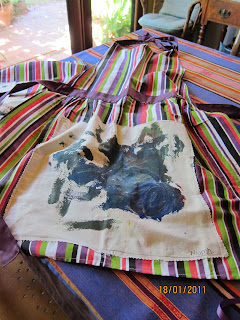 My thanks to Katherine, who coordinated the effort, and did most of the machining.
Posted by Jillian at 10:52 AM 2 comments: Links to this post