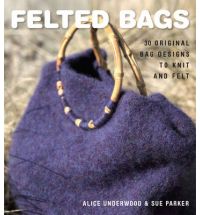 I bought some Murano wool recently from Bendigo Woollen Mills, with the intention of trying out a bag pattern from the book, Felted Bags by Alice Underwood and Sue Parker .

The bag I wanted to try was the one on the cover, but I was keen to try knitting the handles, rather than using bamboo handles.

Murano is suitable for felting, and I was attracted to the variegation. I used CK27. 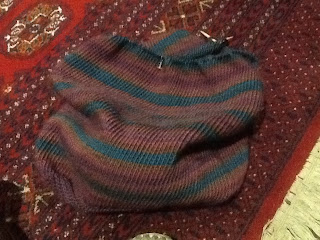 I hadn't expected it to be so even in its striping - but it did prove useful in measuring the length!

I knitted it on circular needles - very easy, but it developed a decided skew to the right as I knitted - maybe influenced by Australian politics at the time of knitting.


I used directions for knitting handles on another bag in the same book but had some difficulty positioning them even though I had four markers in place level with the four corners of the base. 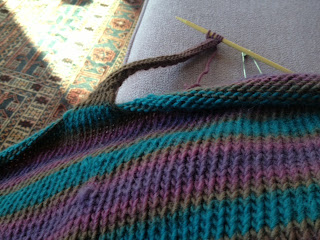 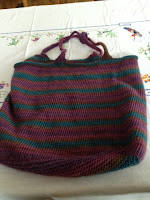 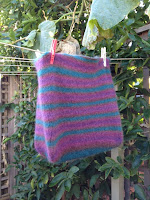 I began felting by hand - our hot water service doesn't heat above 50C - but soon decided to try the washing machine and add a couple of jugs of boiling water. This worked quite well. One cycle in the machine reduced the size by one third - and produced a fair bit of dark blue water! 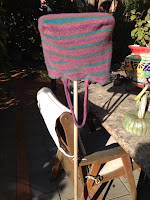 It took a couple of days to dry fully in our current winter weather. I finished it off on the second day over a garden broom - perfect fit for the base, which was the last bit to dry, and easy to move with the sun. 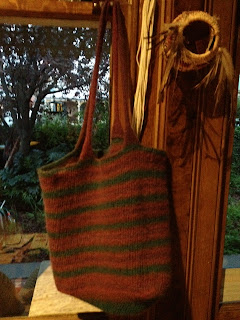 Although I was able to correct some of the skew that developed as I knitted, it isn't entirely gone, resulting in the handles being not properly aligned. I could cut these and reattach with a button finish.

It has been an interesting experiment, and the bag will be useful for shopping so for the moment I will live with it as is.

I have a couple more balls of Murano to try smaller bags, so will try to apply what I've learnt on this one.

The bag looks fantastic felted up. The knitting to the side might be a trait of the murano wool. Many, many years ago the BWM rustic used to knit to one side too. So Mum and I generally only by their alpaca or classic brands. Be interesting to see if the other balls knit the same way. There is a way of correcting it which is to knit the knit stitches from behind. Well thats from memory you might be able to google it.hanguyp 14

That is fantastically helpful Katherine. I've been wondering if it was something I did or didn't do when knitting in the round. I'll follow up and let you know how the other balls go. I might try an experiment with the half ball of this colour I have left.

the bag looks good and I am sure you will get lots of people admiring it when you are out.

I am also surprised at how evenly the stripes came out! I thought at first you used several colours.

It will be a good bag for winter. I'm glad you mentioned the skew in the knitting and elicited Katherine's advice. I have been worrying about the same thing with a project I am about to start.