At the end of my last post an idea was forming. I had intended to embroider figures holding appliquéd quote banners but on reflection I thought it might be better to embroider more figures of women between the banners and at the top and bottom of the piece. This provides a visual link with the first project and retains the central point of the icon - Julia Gillard not only stands for all women, but speaks to women and articulates the concerns and experience of a wide range women.

This particular piece of cotton, the by- product of the Embroiderers' Guild over-dying of thread, was much harder to stitch than the first piece;the weave was tighter and I had lined it with thicker wadding. The stitched figures, therefore, are not quite as detailed or fine.

I used the shape and space between the banners to run strings of related figures. 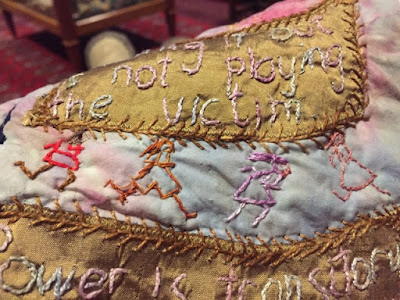 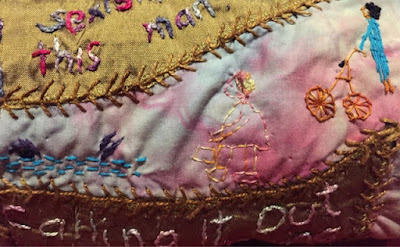 At the bottom are further, more varied, figures. 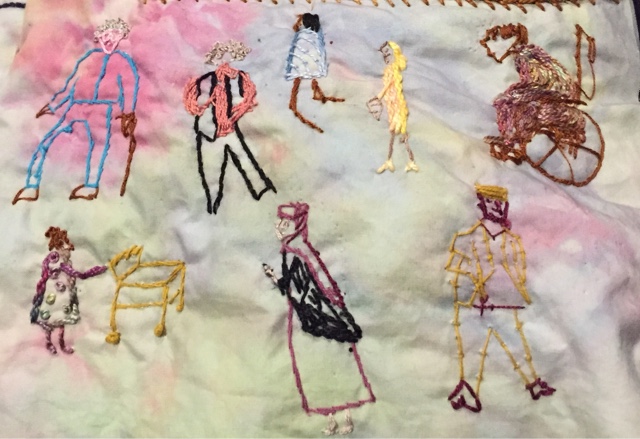 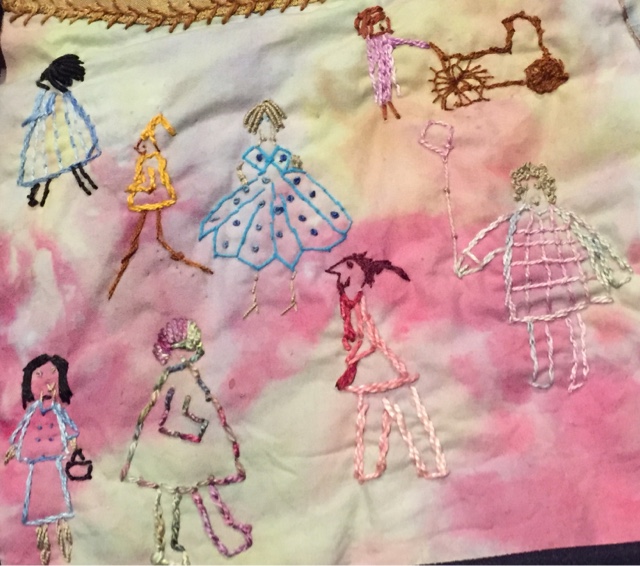 I had enough of the 'women making rain' fabric from the border of project 1 to make a border for this piece, but my instinct was to create a more tradition icon frame.

I managed to find a remnant in Eastern Silk that gave me some gold options. I combined strips cut from the darkest coppery gold with an inset deep navy border made from a Japanese kimono remnant. The finished piece is  about 17" x 22". 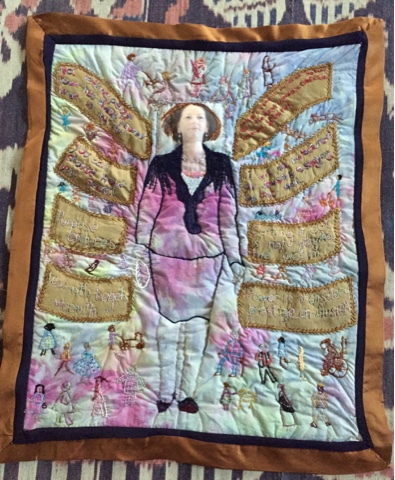 The two pieces are now labelled and packaged, ready for me to take to the Guild on Monday. The Exhibition is August 1-15. My contribution may be a bit out of the mainstream - but we'll see how it goes.

Posted by Jillian at 1:11 PM 4 comments: Links to this post 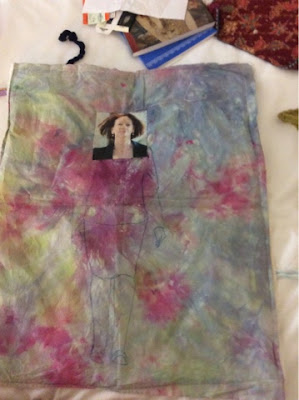 Before I boarded my plane for the UK in late May, I prepared piece of fabric for a second entry in the Embroiderers' Guild of SA Icons Exhibition for SALA - the annual South Australian Living Arts Festival in August. My fabric,is another piece from the Embroiderers' Guild - the fabric on which the Guild's overdyed threads are dried. This piece is darker than the first one I used and I was keen to work with it.

Again, I layered it with polyester wadding and calico. I traced on to it a different photo of Julia Gillard and printed off the head onto fabric 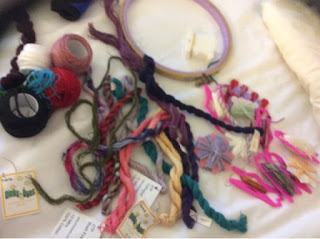 I then gathered a range of threads that blended and contrasted with the fabric. This was the extent of my preparation before I left home.
While away I thought about what to do with this piece. I loved doing the little figures on the last one, but wondered whether doing another similar one was the way to go. After reading some commentary on Julia Gillard's recently published book, I came up with the idea of banners bearing quotes, from her book, but also from earlier speeches and interviews. I thought this could work. 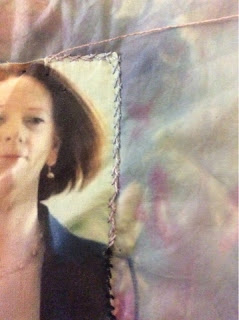 Once I had finished my two bag projects and have put away my two Scottish Tour pieces for want of suitable equipment while travelling, I got out the prepared icons fabric and began work on it.

I began by tacking, then herringbone-stitching the headpiece in place. It needed a little bit of stuffing, which I didn't have with me, so I left an edge open. I began stitching in some additional hair but stopped until I had access to stuffing. 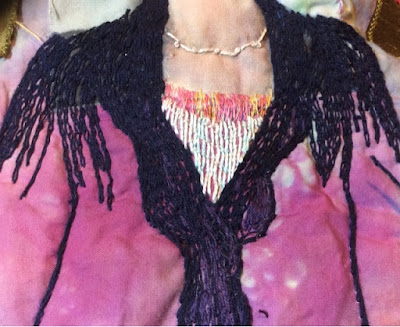 I then embroidered over the printed jacket - but didn't take the stitching all the way. I thought it would be interesting to leave some of the dyed fabric - hinting at the transition from the corporate PM to a citizen who comments and speaks her mind.
This is as far as I got while away.

I did, however, discuss the project with Pat Thomson in Nottingham. I was finding this particular piece of cloth rather tough to stitch and Pat suggested appliquéing the banners on - a brilliant idea which I have adopted. 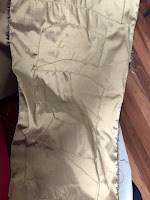 Since arriving home I have tried out various fabrics and threads for the banners, settling on some gold Dupion silk - in the spirit of icons. For the words I chose variegated thread that echoes the fabric. I created paper templates for the banners, traced them on to the Dupion, machine stitched around them to get an outline. 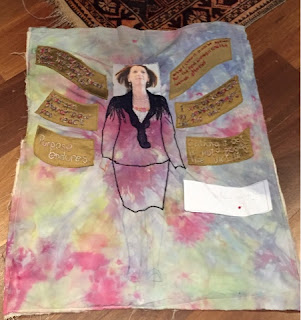 Over the last couple of days I have been stitching words and have fixed the banners in place ready for appliquéing.
I used split stitch on the words.

As you can see it is possible to read, but requires a hard look. 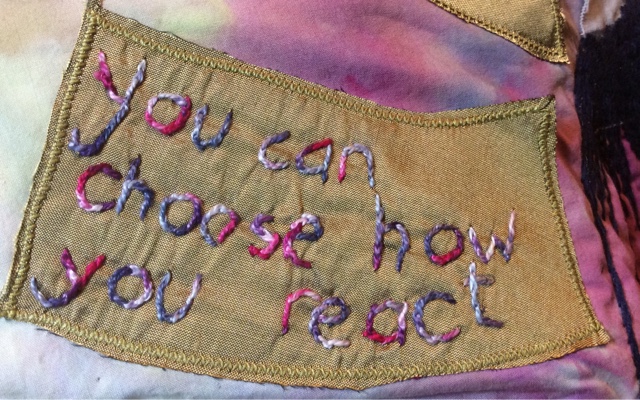 Photographing them helps to see the problems. The word 'easier' below, for example, needs a couple of extra stitches. 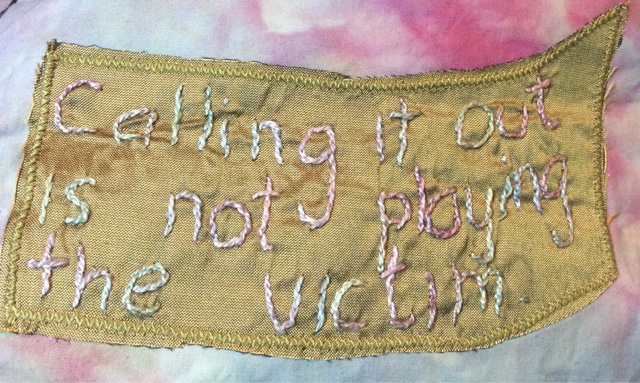 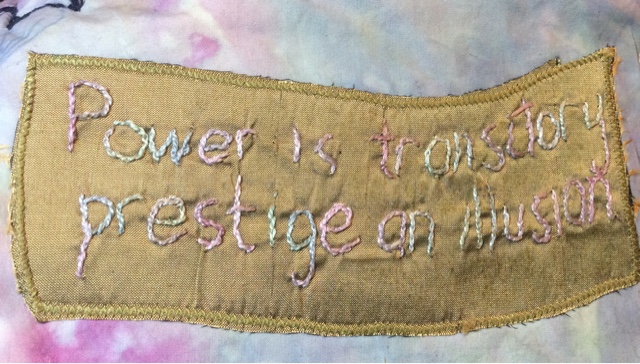 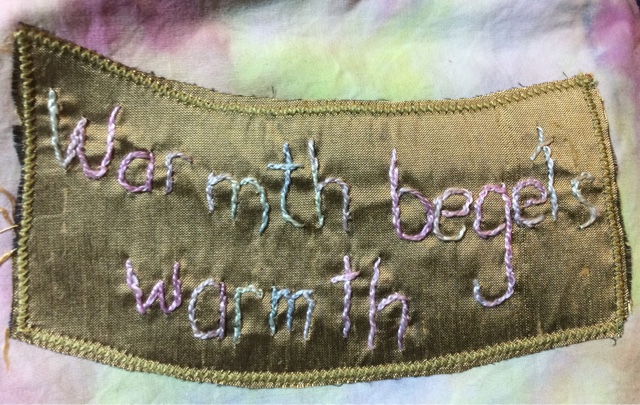 I am now in the process of appliquéing the edges of the banners using a detached wheat-ear stitch. 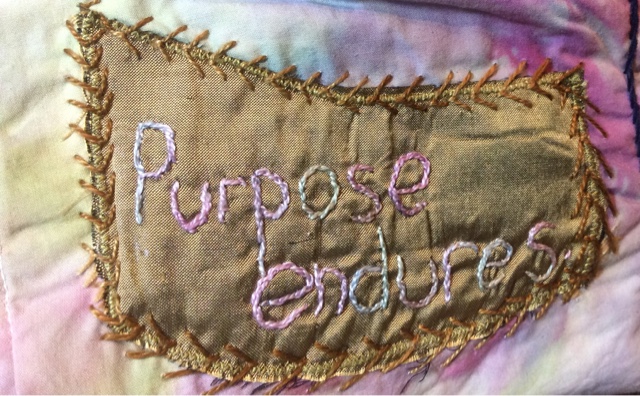 I'm hoping to create the sense of feathers, so the banners take of an echo of wings, again, in the icon tradition.

Yesterday I called at the Guild office and picked up an entry for the Exhibition. It is being hung on 29 July, so I have two weeks to finish it.

Originally I thought I'd embroider little figures holding the banners but I've revised that. Another idea is forming - more on that next time.
Posted by Jillian at 5:22 PM 4 comments: Links to this post

While travelling I brought with me four simple projects I could do without too much thinking or referring to instructions. Three of these were bags and one an apron, all stamped cross stitch. All come ready made. Two bags were single colour by Duftin and one bag and the apron were Herschners. I also brought another Icons project barely started.
The bags are large and useful, especially in South Australia where we pay for plastic carry bags in supermarkets, so mostly take our own. The idea in taking these to work on was that they make quite nice and useful presents and I could give them as gifts while away.
This first project used maroon thread. 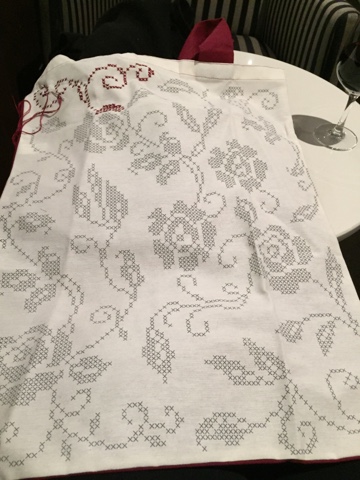 I found it neater to use running stitch rather than a true cross stitch when covering the large areas. 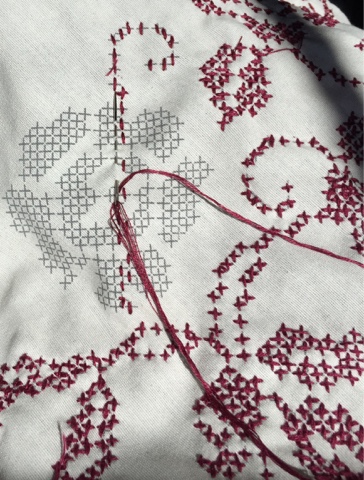 I had expected to do more on the plane trip over and only just a managed to finish it in time to give as a gift before I left Norfolk in mid-June. I even forgot to photograph the finished article, but it was being gratifyingly well used by my cousin Susan.
When I went to organise the second project, the apron, I remembered that the kit did not come with thread and I hadn't packed any, so I included the kit in a parcel I sent back to Australia.
My third project was a slightly smaller bag with brightly coloured owls on a tree.
This one I finished several days after leaving Cheltenham, where the intended recipient lives, so I posted it on.
It had been quite fun doing it. Although the kit carried Herrschners' label, I think it too was manufactured by Duftin.  The hanks of thread were not branded, but it was, on the whole, good to work with - smooth and strong, with a good sheen. Only one colour, the dark brown, consistently knotted. 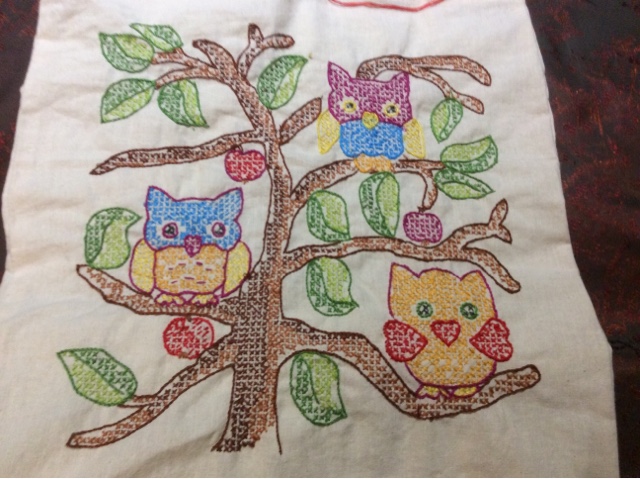 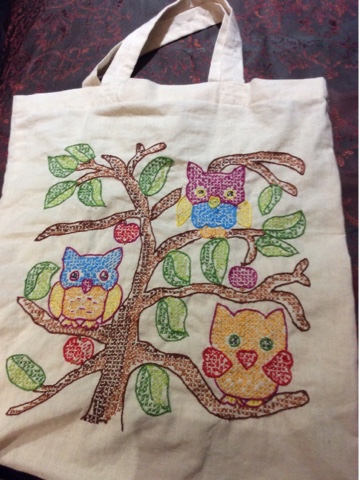 My cousin Christine was so pleased with the bag that she has framed it, to hang beside a piece of her late mother-in-law's work. I am touched, humbled - and really glad I made the effort.
Isn't Eddy's mum's piece lovely? 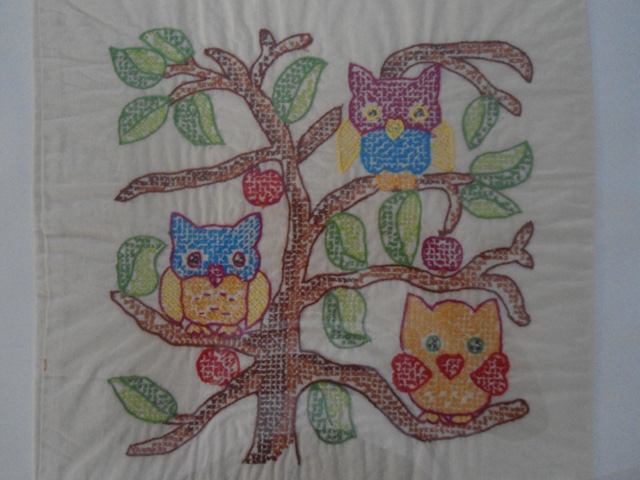 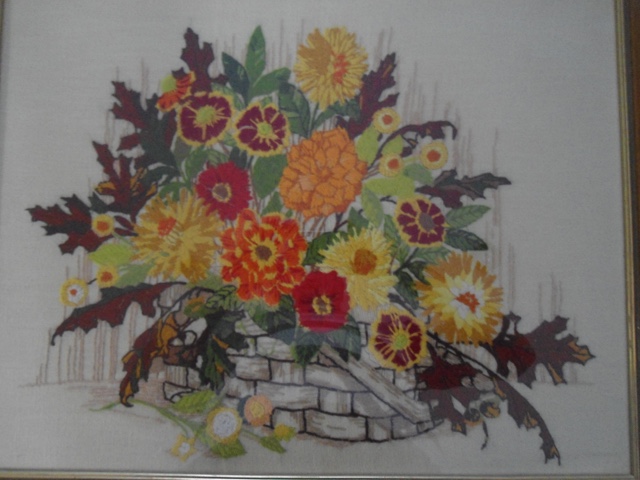 Oh, and the fourth bag? Still at the bottom of my suitcase, untouched!
Posted by Jillian at 11:08 PM 1 comment: Links to this post