Yesterday I attended a Certificate Course Class at the Embroiderers' Guild. These classes are held monthly on a Saturday and any Guild member can join the class with the Certificate students. It's a generous gesture by the Guild and by the certificate course teachers. 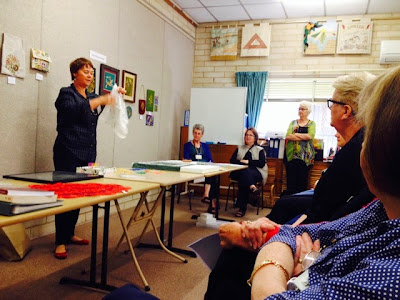 Yesterday Arrienne Wynen, current Guild President, taught a class in Tenerife lace. As usual, we saw many examples of the technique and Arienne demonstrated the basics.

Tenerife is a technique used in many forms of lace. It is now worked as medallions, joined together or inserted into fabric. The medallions are formed by inserting pins into a pattern, then weaving and knotting thread in line with the pattern. 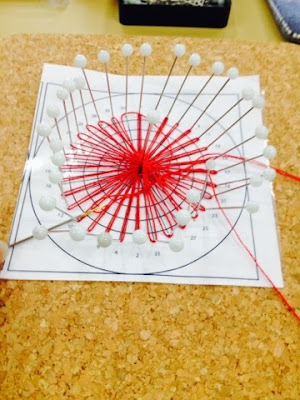 The pattern rests on a pilliow or board. I used a cork board kindly supplied by a friend at the class. My pins were long - which made for some awkwardness. You begin by creating a web. Our pattern had 32 'spokes'. The centre was woven, then secured with Coral Knots. 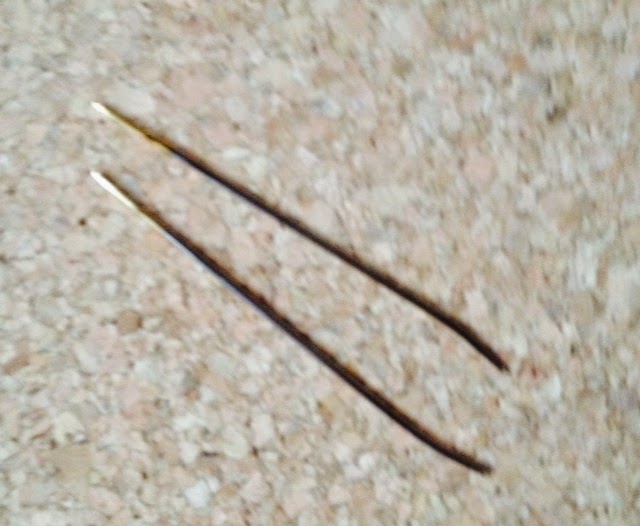 Further rows of Coral Knots were then worked out from the centre to create patterns. We used a huck needle supplied by Arrienne - a great idea as the angle of the tip, as well as its bluntness really helped. 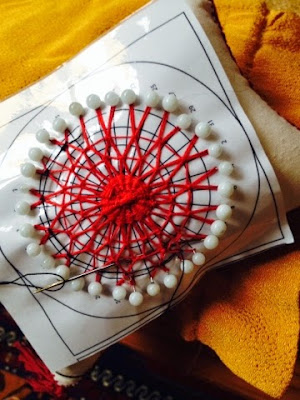 When I got home after the class I transferred the pattern and my piece to a large, fat pincushion. This meant I could push the pins in much further and it became easier to work. 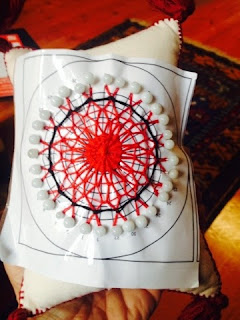 I added a black edge, by changing to black thread, doing one round of knots, two rounds of weaving and another row of knots.

This was a fun class. I learned a lot - from Arrienne, the other students, and my own mistakes. I don't see myself working a big project in this technique, but could see myself using motifs for embellishment. 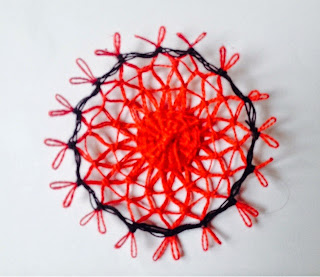 Posted by Jillian at 8:26 AM 3 comments: Links to this post

The final stages of the Maharani's Fishpond project involved stuffing and embroidering the central motif and finding a use for the finished piece. 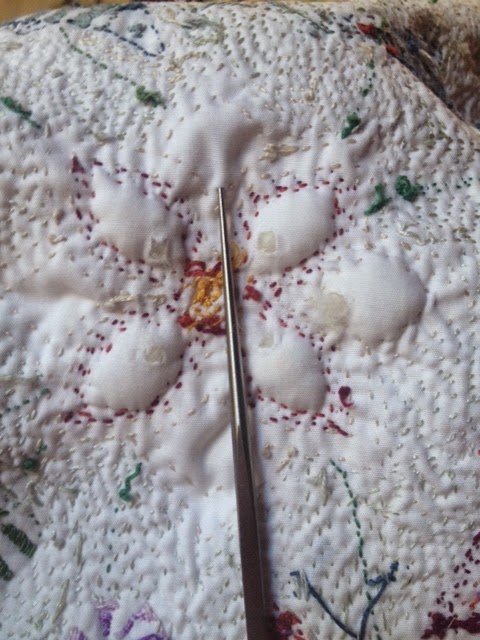 The stuffing involved filling the little lotus leaves with stuffing - I used polyester - and cording the outlines of the leaves - I used 8 ply knitting cotton.

I pierced the back of the spaces to be stuffed with my very fine stiletto, then used a bone laying-tool to push the stuffing in.  It was amazing how much went in! 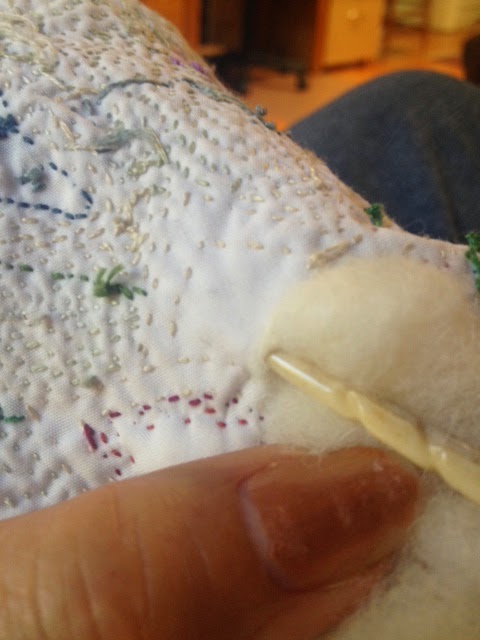 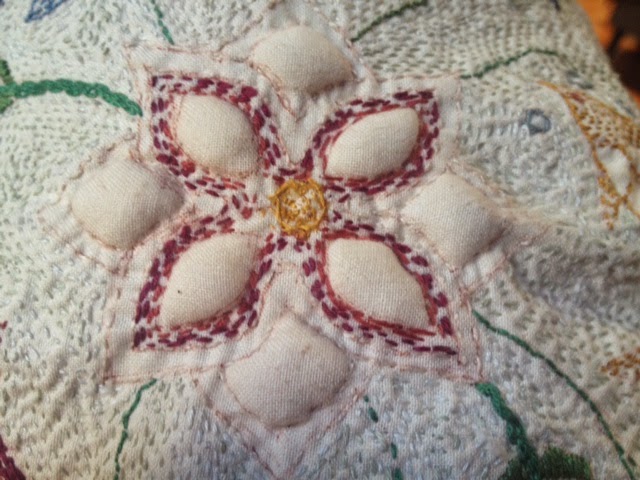 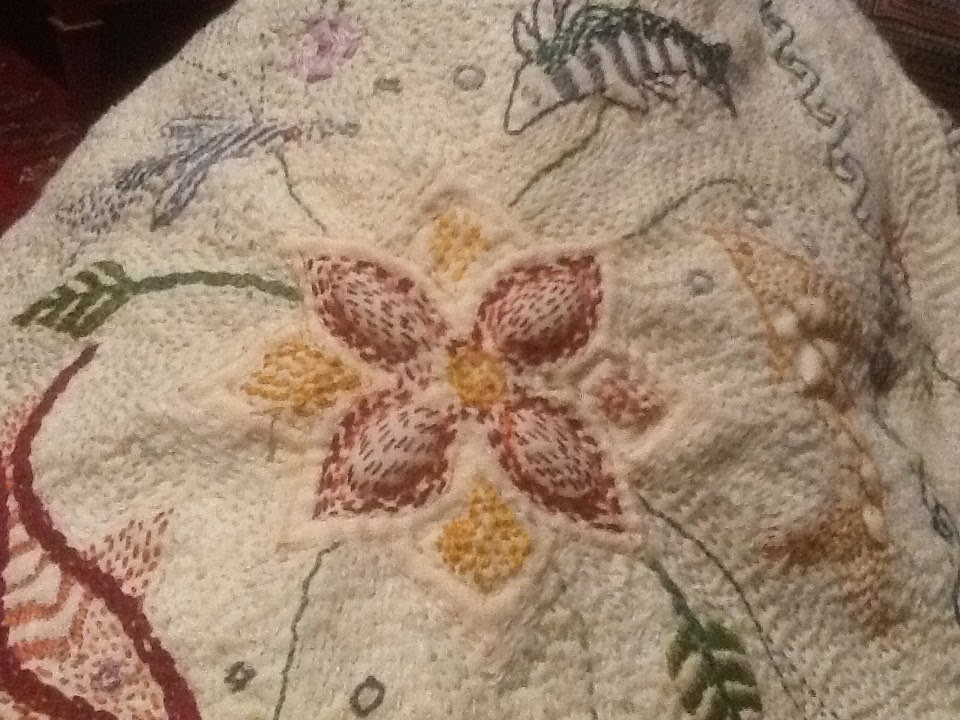 Having finished that, I decided the outer leaves shouldn't have been padded, so removed the padding from those, corded the outer edges and then embroidered the leaves.

I had tried several different stitches in the centre but was unhappy with all of them, so dug out a stash of small shells with holes for threading, selected a tiny operculum and stitched it in the centre. 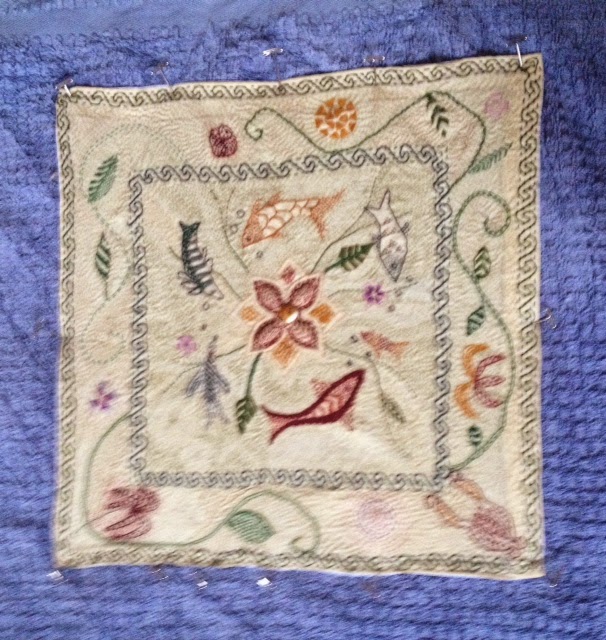 In the morning I hand-appliqued it to the bag we were given on enrolment in the Guild's Summer School. These were shopping bag size, of maroon cotton and lined. 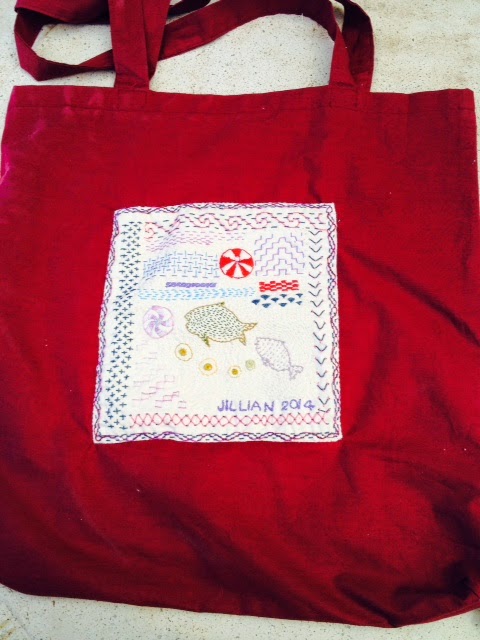 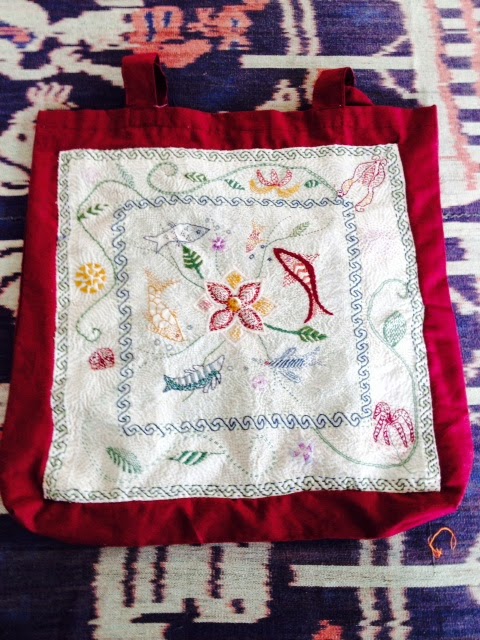 On the back I appliqued the 20cm sampler I made last year under Barbara's tutelage.

In South Australia we pay a deposit on all plastic carry bags at supermarkets - so we all carry reusable shopping bags.I know I will use this bag for quite a while to come. 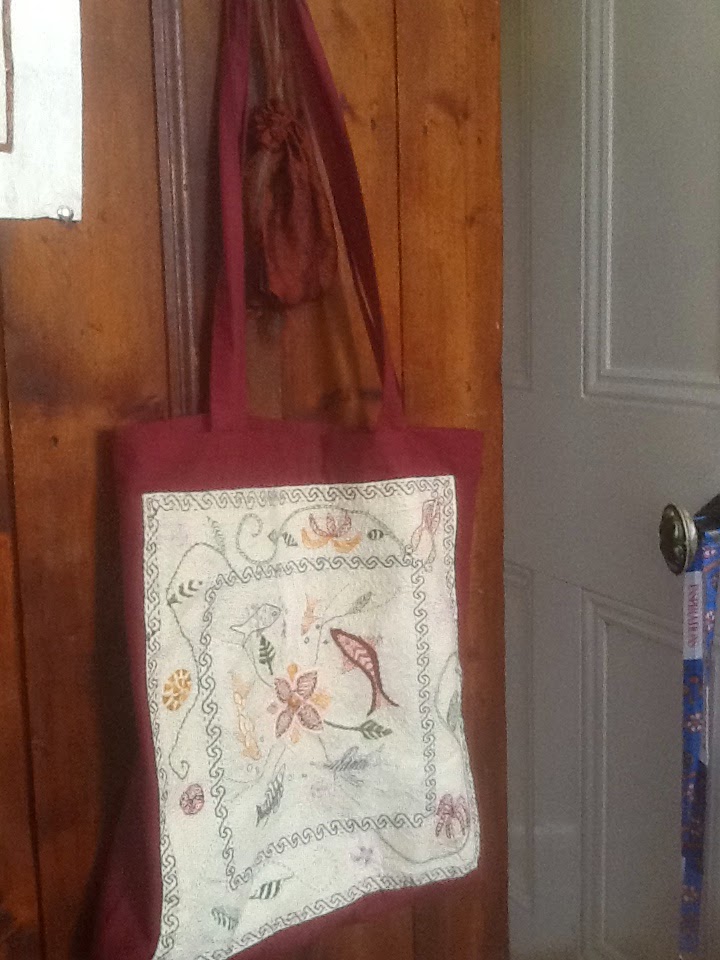 The colour of the bag is less red than shows here. I have taken the photo many times, but have not yet succeeded in taking one I am happy with.

The bag, however, pleases me no end!

Posted by Jillian at 4:21 PM 2 comments: Links to this post 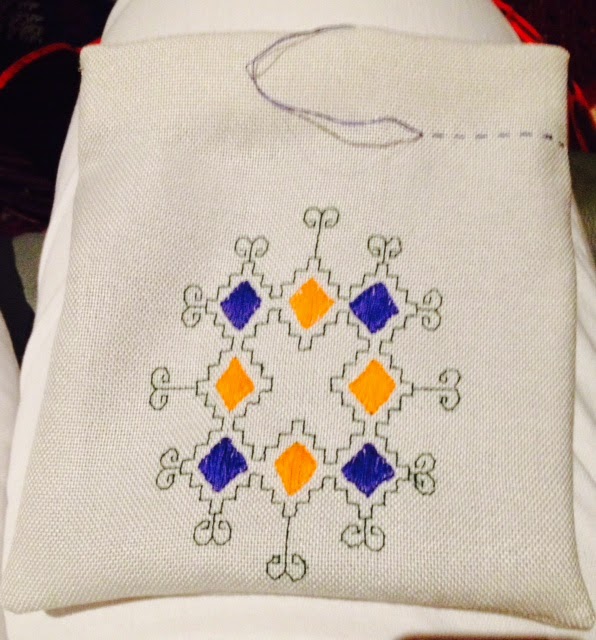 This is what I did with the piece of Lagartera I made at the Certificate Course Class at the end of February.

I joined the piece of fabric into a bag and secured the hem at the top with running stitch. 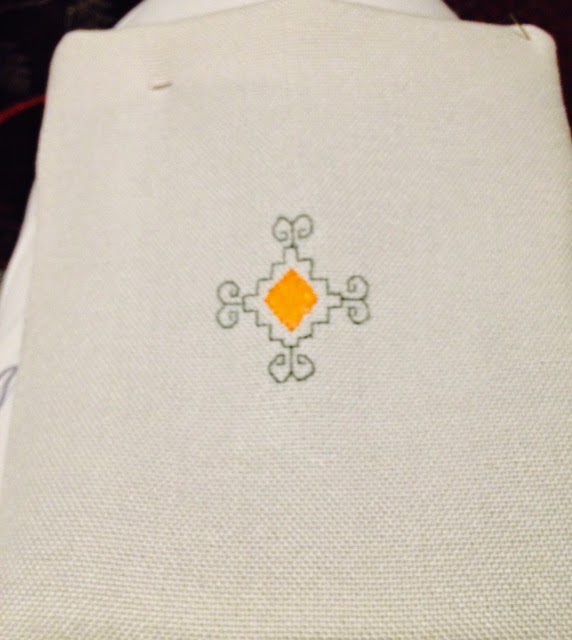 On the back I embroidered one of the small diamond motifs. 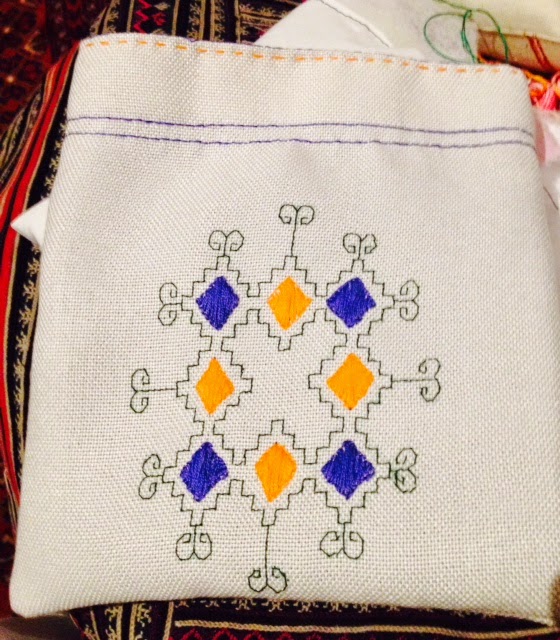 I created a tube for the cord using double running stitch.

I also experimented with a row of stitching around the edge - but unpicked it! 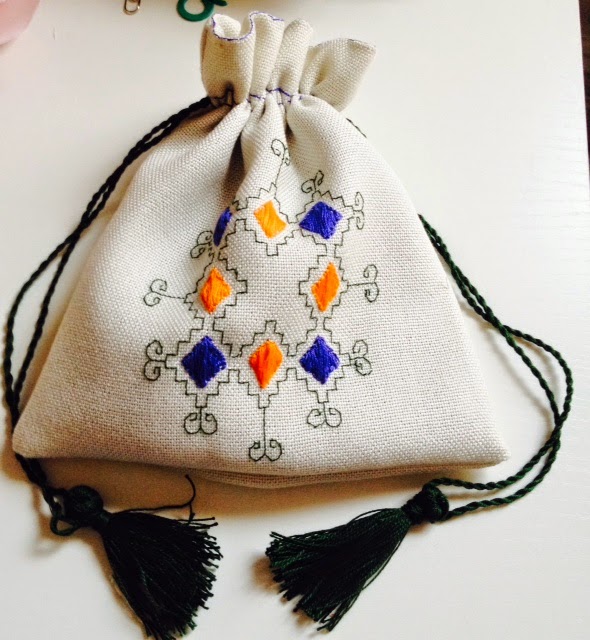 I made a cord and tassels using the green thread from the lagartera outline. 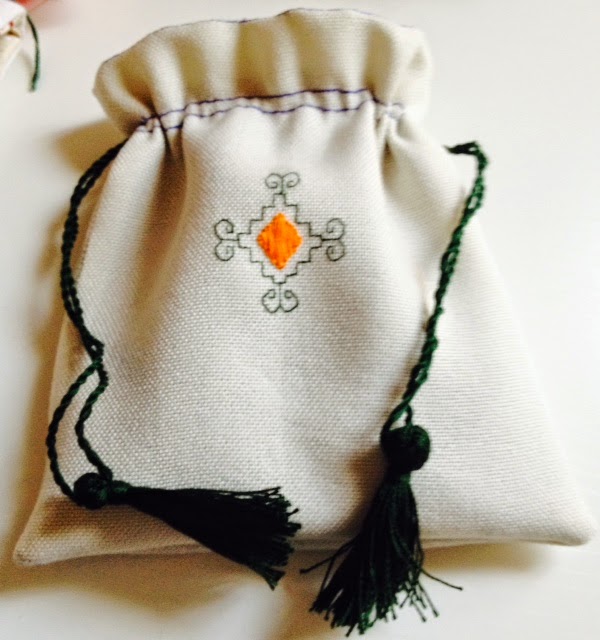 Someone will enjoy this bag with a small gift inside.

It's been a great little project. Thanks again to the Guild for generously allowing members to participate in these Certificate Courses - and to Gay for her teaching.
Posted by Jillian at 3:02 PM 2 comments: Links to this post 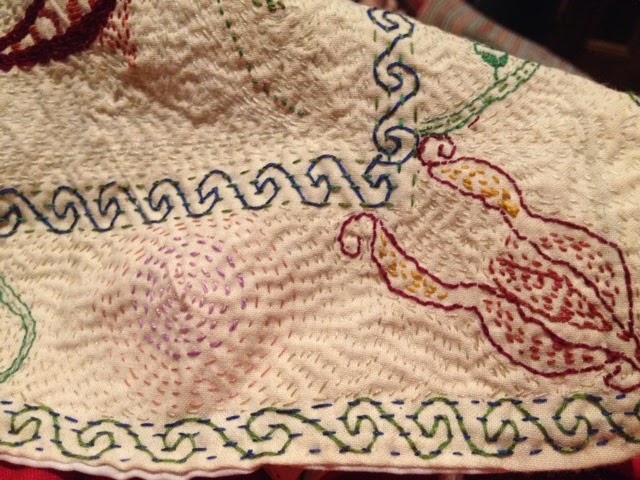 I have been doing the background fill of the Maharani's Fishpond. Again, it's been pleasurable - free-form stitching in single thread running stitch. I've only used a few pale colours. 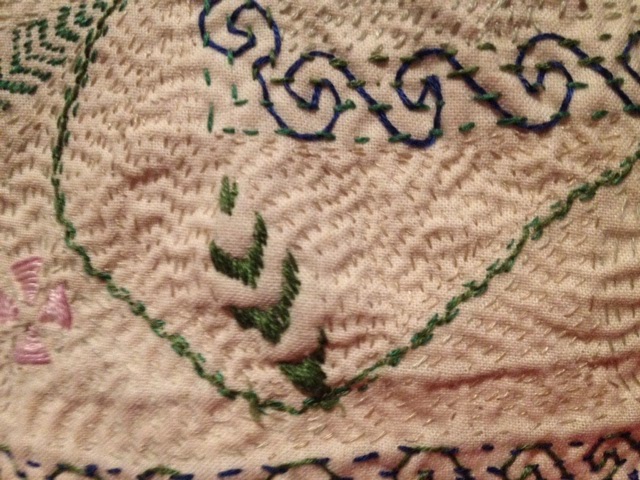 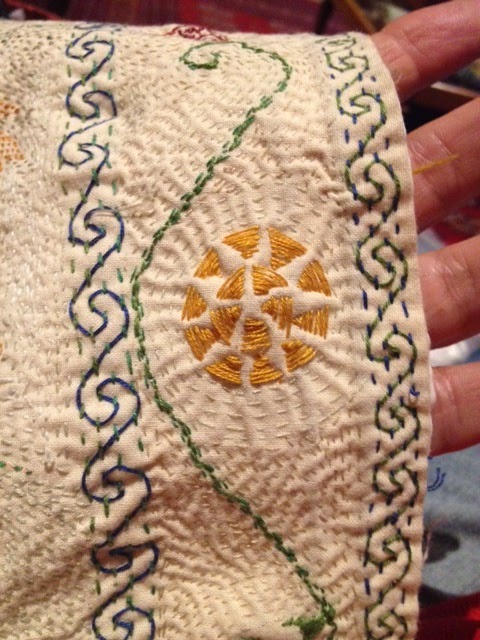 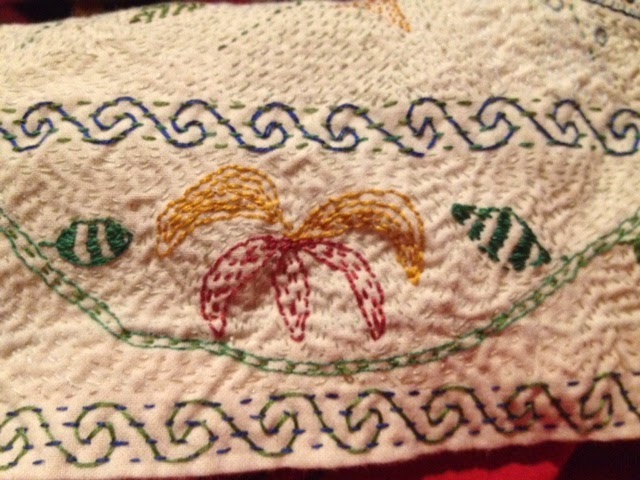 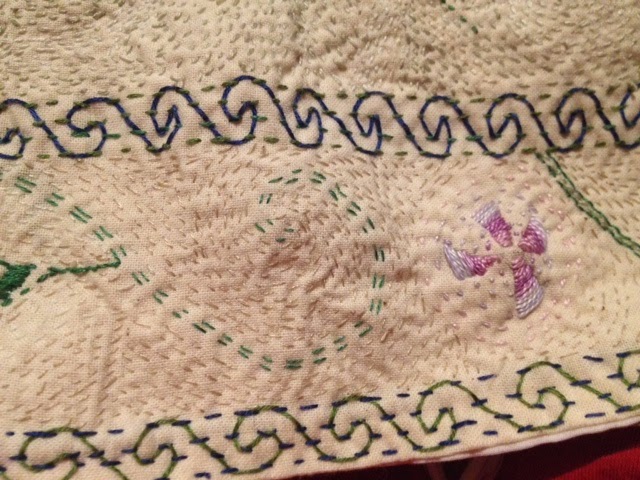 The overall effect is pleasing, but difficult to photograph.
Those with keen eyes will notice  I have begun to stuff the central motif - but more on that later! 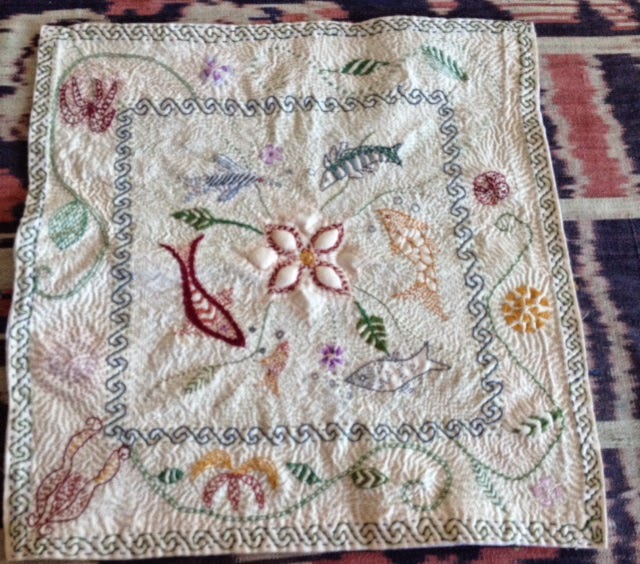 Last Saturday I went along to the class Gay Sanderson ran for  the SA Embroiderers' Guild Certificate Course. The class was in Largartera, an embroidery style from the Spanish village of the same name. The Guild has done work on this form of embroidery in the past, producing a book that is still in print.

I have been a bit busy in the last week - partly because of the Adelaide Festival of Arts - and prepared for the class very early on Saturday morning - choosing what looked like a piece of evenweave linen that I could see without too much extra magnification. 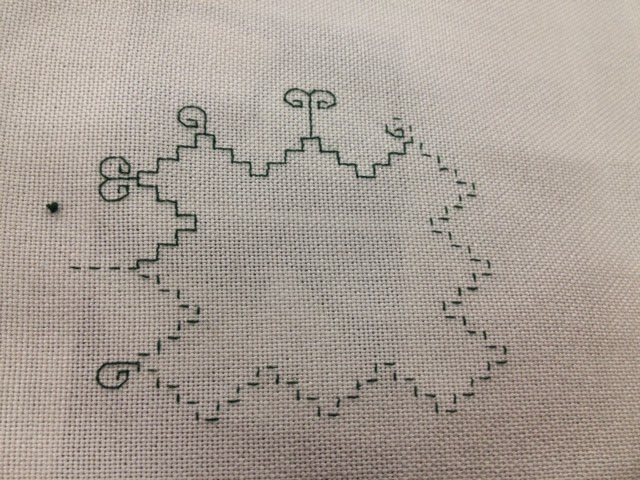 As the class progressed from examining Gay's many examples of Lagartera work, to actual stitching, an interesting problem emerged on my linen.

The design, which was square, emerged rectangular. Gay checked my counting, which, somewhat to my relief, was accurate.

My linen was not, in fact, evenweave, but had more threads in the warp than the weft. I decided to press on regardless.  It meant the satin stitch diamonds had to be worked with rather longer stitches than would otherwise have been the case. I used three strands of cotton, both for the satin stitch and for the backstitch outlines of the diamonds. 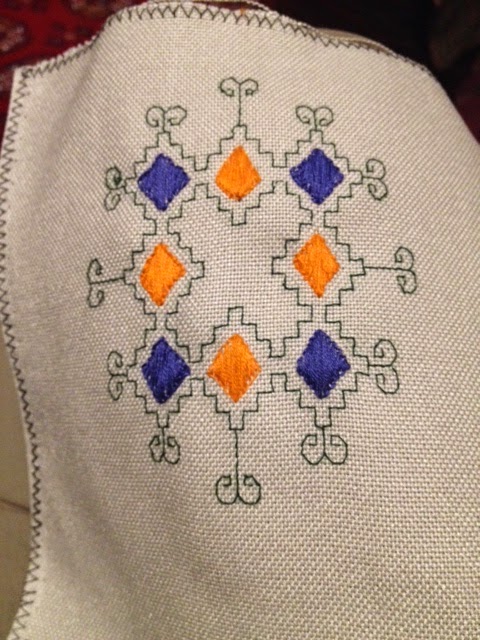 The linen was good to work with - just not square!

I finished off the sample last night.

I will probably make it up into a small gift bag, rather than the pincushion originally intended!

It was a great class, focused and fun.  Gay is an engaging and relaxed teacher and there was a lot of sharing of knowledge and skill.

I'm sure I'll do more Lagartera.