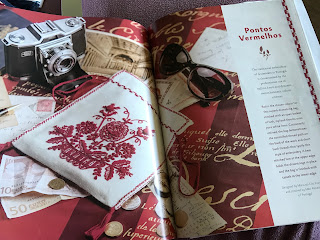 I have been making a bit of an effort to work some of the kits and projects in my stash. I played with a few of them, but the one that spoke to me was Pontos Vermelhos, a drawstring bag designed by Maria do Ceu Freitas in Inspirations 79  in 2013. I features the traditional embroidery of Guimaraes in Portugal. 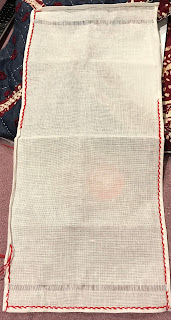 The bag is worked on a single piece of linen, edged and prepared for construction before embroidering. Traditionally worked in one colour, this one is in red. 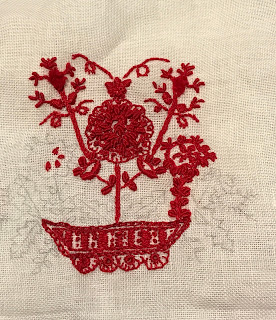 I used a pencil to trace the design on  to the linen.

It was relatively complex, but could be followed from the basic shapes of the design. 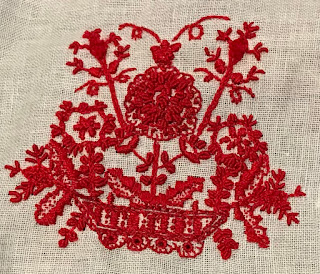 The result is highly textured - and really interesting to work. 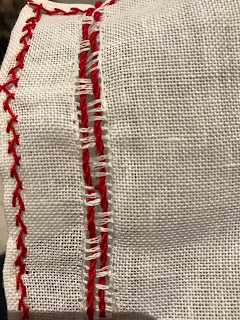 The interest didn't stop there.  The bag is stitched together decoratively, a hem-stitched panel accommodates a cord and tassels are added. 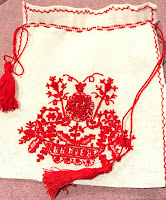 I love the result - and enjoyed it. It is the kind of project that gives me huge enjoyment - so many parts, each one satisfying and purposeful. 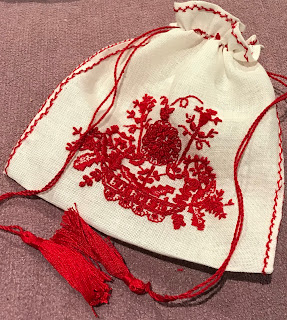 For the moment this is a keeper. I am using it to store the monthly Stitchy Box thread packs.


I am also grateful to Christine Bishop for showing me a piece from her collection of Portuguese Embroidery and giving me access to an article she wrote on Viano do Castelo Embroidery for Embroidery and Cross Stitch Magazine.

Posted by Jillian at 1:22 PM 2 comments: Links to this post

The Quaker community in Australia is working on producing a series of embroideries along the lines of those in Kendal, Cumbria UK. The 77 Kendal panels were worked between 1981 and 1989 by 4000 embroiderers in 15 countries and tell the some of the story of Quakerism. The Australian Quaker Narrative Embroidery/Friends in Stitches Project is the result of a visit of an Australian Quaker to Kendal in 2005 which was followed by a visit to Australia in 2007 from the Director of the Kendal project. 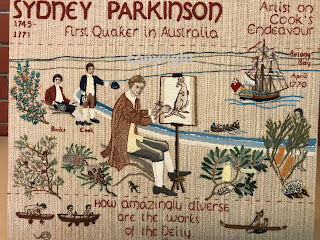 So far 16 panels have been worked on the Australian project which aims for 40 panels.
The Australian panels use the same format and design templates as those in Kendal, and the same range of stitches. The colour palette is slightly different, reflecting both the Australian landscape and the interpretation of the stitchers. 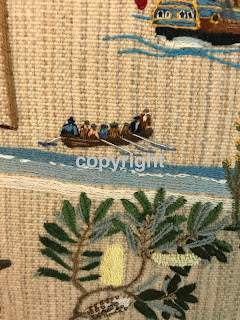 The panels completed so far were on display at the Friends Meeting Room in Adelaide from 26-29 October 2017.  They are remarkable on a number of fronts.

Finding the images, stitches, design and words that convey a whole narrative episode in a panel is an art. It has found its stride in this project.  I came away with a strong sense of the Society of Friends in Australia.

The women staffing the exhibition were knowledgable, helpful and welcoming. They gave permission to take  photos and also to write about the exhibition in my blog. 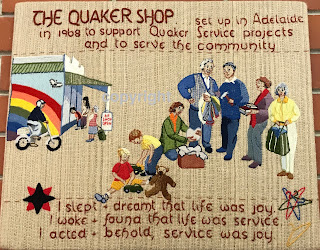 As there are few photographs of the panels online I have focused on the embroidery detail rather than whole panels. I also emailed a draft copy of the blog to the address the women provided with the offer to alter or edit and the offer stands.


The photos are copyright. Any requests to reproduce should be directed to the Australian Quaker Narrative Embroidery Project. 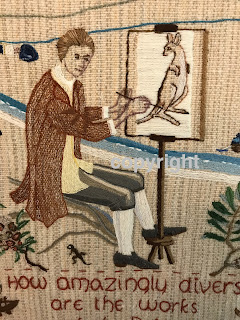 The background fabric is wool, grown, spun and woven in Queensland and providing a lovely textured, firm and even surface for stitching.

The design skill of individual stitchers is evident in the stance of the figures depicted - they lean into conversation or activity. Their faces, with a few well-placed stitches, give them personality, making them, I am sure, recognisable.


The same range of stitches has been used as was used in the Kendal work. A book of stitches produced in Kendal was on display. 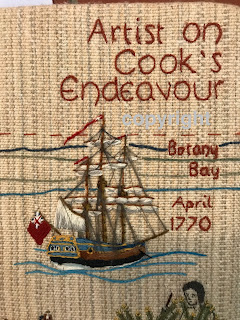 Anne Wynn-Wilson, while working on the original Quaker tapestry project, developed a stitch, now known as Quaker stitch, for embroidering the text that is an integral part of each panel.  The stitch produces a beautifully clear text that contributes significantly to the elegance of the panels. I intend to learn and apply Quaker stitch to my own work.


The detail of the flora and fauna depicted on the panels is terrific, cleverly conveying dimension with a limited range of stitches and superb colour choice. 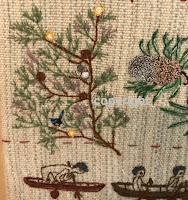 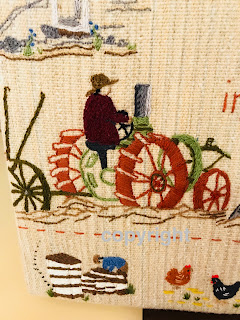 My favourite depiction is of a tractor - the wheels given movement and dimension by the creation of spaces and angle.


I hope to see the other panels as they emerge - and one day the completed project. 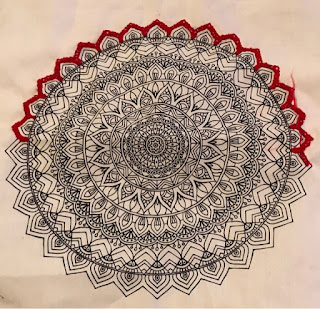 For some time I had thought that Zen colouring designs would make interesting embroidery, so a couple of years ago, when Herrschner's advertised some already printed on fabric, I ordered some for me and some for my Adelaide daughter.  She got to work on hers fairly smartly, but I put them on my embroidery back-burner. In the last month or so I dug one out as a back-up 'grab and go' project. 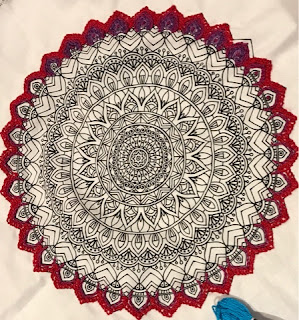 I also wanted to try out a range of stitches. The narrowness of the bands of the design, especially when combined with the heaviness of the thread, places some limits on stitches. I worked the outside border in fly stitch. It gave the density of colour that I wanted - but used an entire skein of thread. 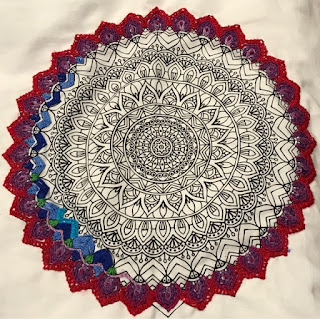 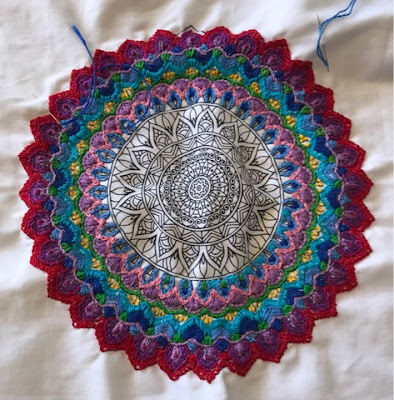 Keeping to my rainbow colour movement wasn't straightforward but it provided a general guide. I tried to foreshadow coming colours and provide an echo of those I was moving away from.

I found it useful as I entered a new band, to try out colours on a wedge.


The density of the thread grew on me. It began to look like a carpet. 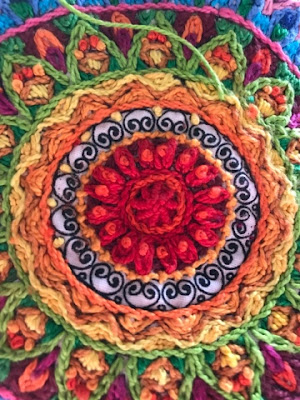 Most of it I worked in my hand. I needed to scoop most of the stitches and even if I don't always follow the maxim 'never scoop in a hoop' (picked up at a class at the RSN) these narrow circular bands are difficult to work in a hoop. I used a hoop for the pistol stitches.

The row of curly things gave me a challenge. I tried bullion knots and fly stitch before settling on a double couched line and French knots. The line below these is worked in Palestrina knot stitch. 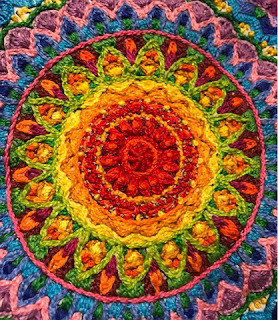 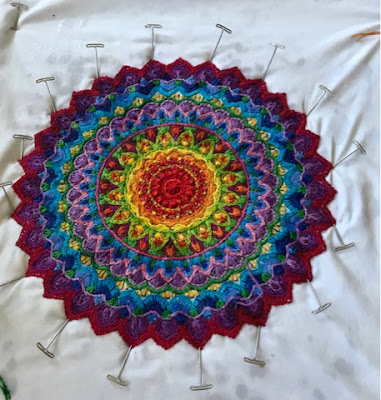 The finished piece needed blocking - and easy task which straightened it up nicely.


By now I had decided what to do with the finished piece, which is about 10" in diameter.


I appliqued it on to the coat I made last year, using the red thread of the outside border and a buttonhole stitch.

It blends well with the wool fabric and I get to see it (as, of course, do others!). 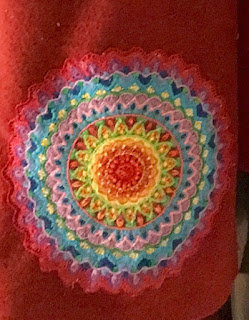 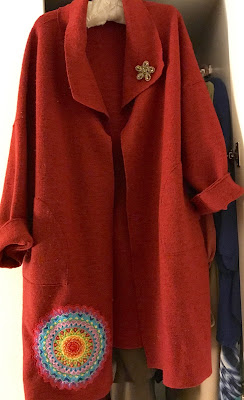 I've really enjoyed this piece. The threads (somewhat to my surprise) were terrific. I have some other designs to do and another pack of thread when the mood takes me.
Posted by Jillian at 7:03 PM 2 comments: Links to this post