The last of my Guardian Cushions is rather different in style. I really wanted to work one of Esther Vigil's colcha angels - from her Colcha book. Somehow, batik didn't seem to suit and I searched my stash for something more suitable, coming up with a piece of rusty red dupion silk.This set me thinking, so, rather than stitching the figure in the colcha stitch, I made a pile of my silk fabric pieces and chose some that I thought would look well on the dupion. 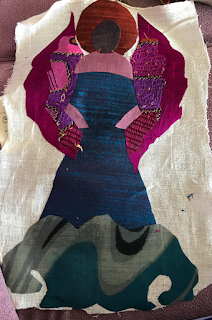 I then traced the pattern, cut some pieces and played around. I used an adhesive backing to attach the silk cut-outs to a cheese-cloth backing. I decided this would look better if machine-appliqued rather than hand-stitched (I am stepping well outside my comfort-zone here!) so set to work using some gold synthetic thread. 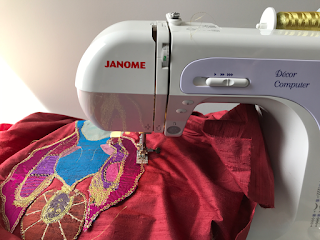 When I had the pieces outlined and stitched together I plunged into stitching it to the background silk. The gold thread was clearly designed for use in an overlocker, or machine that held the reel upright, so I had many breakages and rethreading but got into a pattern of intervening in the thread feed to minimise the problem. 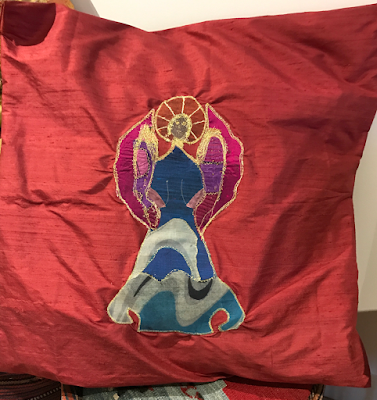 I modified the halo shape as it seemed a bit small. I'm not sure this was the best idea - but I stuck with it. The original shape was more in keeping with the oval stylised head, whereas the round shape halo might be better with more flowing angel hair.

Although I love the Dijanne Cevaal panels and the challenge of finding the right thread and embellishment, I was pleased to turn to the purity and vibrancy of silk for this final cushion. It's as an angel should be.

During January, while I have been posting these Guardian cushions (which could not be posted until after Christmas) I have been to the SA Embroiderers' Guild Summer Week - and also on holiday. I will begin posting those projects towards the end of this week. 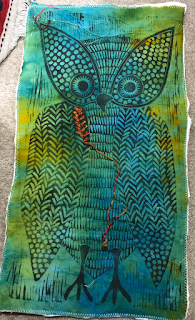 At the October Craft and Quilt Fare in Adelaide I had resisted the temptation to buy one of the owl panels that Dijanne Cevaal had available. A friend urged me to buy, but as I had four untouched panels at home I resisted.

That was before I conceived of my 'guardians' theme.

Niamh likes owls. Owls too, have, in literature, performed the role of guardians of humans.

I contacted Dijanne and bought a panel.

I figured this is a mystical owl so chose red/gold colours to reflect that. I still had some of the lovely red/gold over-dyed stranded, as well as some lovely red silks.

I tried a range of stitches on the wings and breast, trying to get a notion of feathers. I did a couple of rows in colcha stitch. On the breast I used long single chain stitches, double in some places to get coverage. 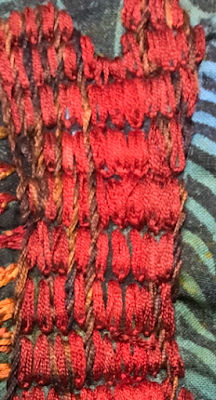 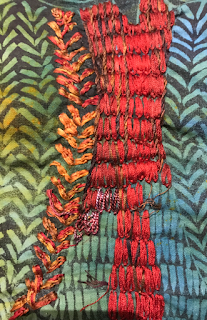 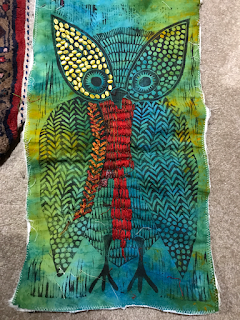 I went looking for beads for the head- flat, round ones to go in those circles. The ones I found were a little yellower than I was looking for, but I went with them anyway. 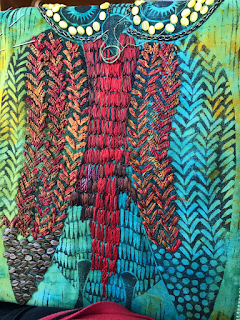 I found some owl-coloured ones that I decided to use for the wing tips. 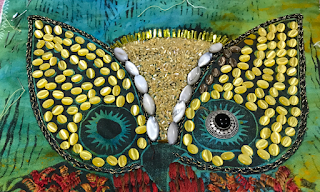 After trying a few seed beads and larger ovals in the central head section, I settled for an outline of large ovals and chips of gold bugle beads to infill. It took a while but I was pleased with the result. I also had to go back to the bead shop several times - and captured the market on round flat beads! 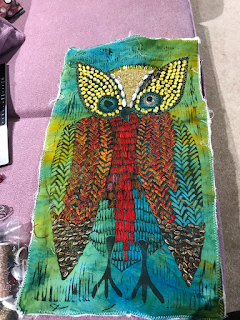 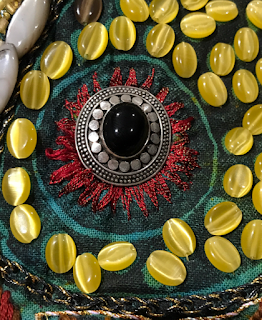 Amongst my cache of broken jewellery I had a pair of earrings that were perfect for the eyes. I stitched the surround in red metallic and attached the silver disc with (I confess!) super-glue. 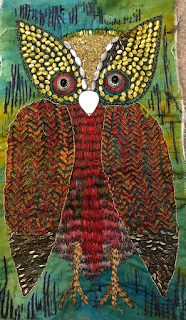 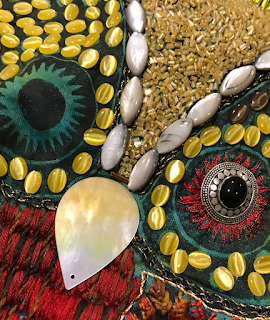 The beak is a shell from an odd earring. I used midnight purple for the background and a straw-coloured silk for the feet - to pick up the gold in the head.

I chose the batik (again from Chrissy at Batik Fabrics Online - superfast pre-Christmas service) to suggest trees. I wanted the owl to seem to be emerging from the greenery, so did not put a border on this one. 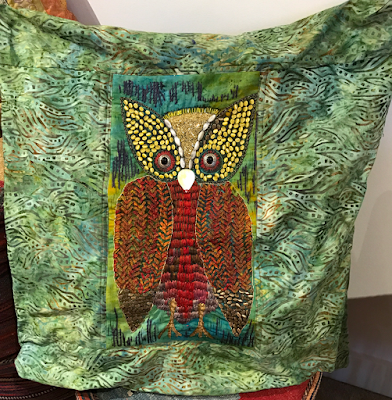 I'm very pleased I relented and sent for this one. It turned out better than I  had dared hope.

After working the Sentinelle,  having so much fun, and earmarking it for Veronica, I decided to work a series of 'Guardian' figures for each of my grandchildren. Esther Vigil, whose excellent books on Colcha Embroidery had been so useful for my New Mexico Colcha Embroidery Workshop, had told me she was embroidering an angel for each of her grandchildren.  This got me thinking.  I already had the Sentinelle, to stand guard over Veronica. 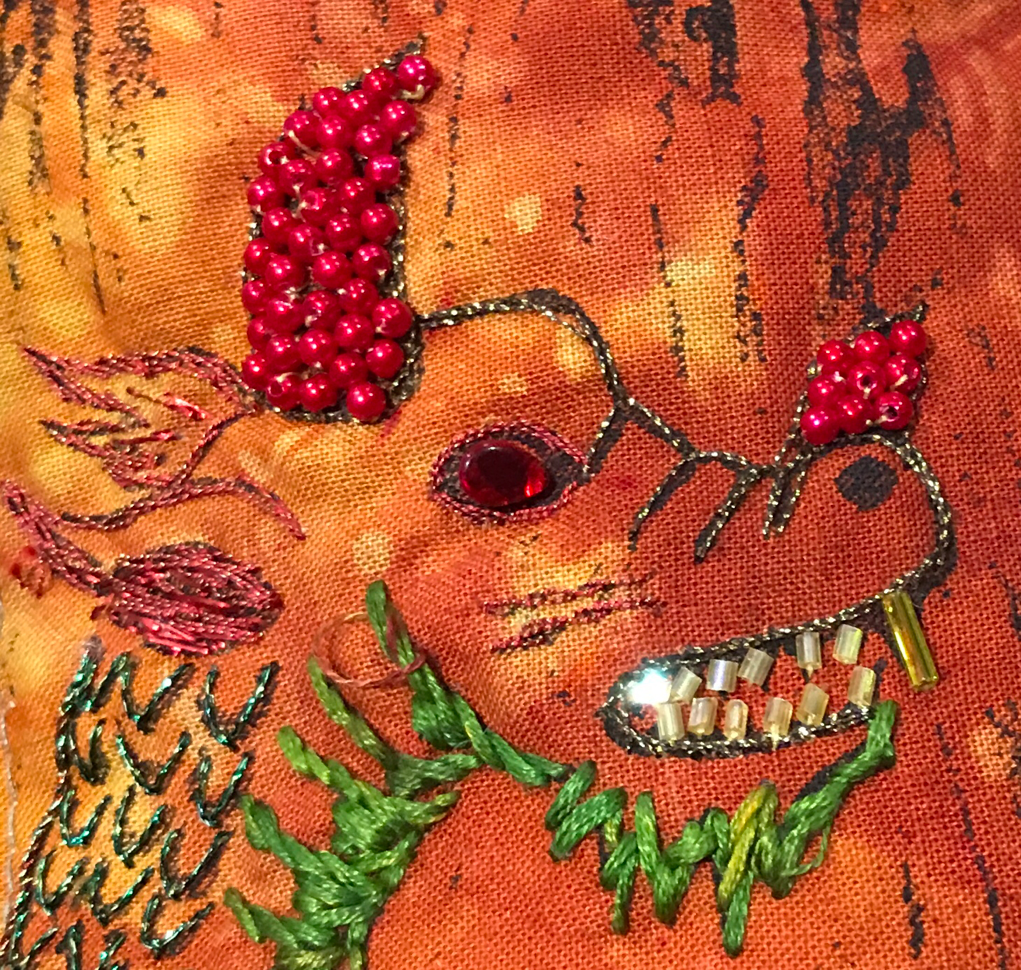 I also had a dragon, another guardian figure - especially in Chinese mythology, where the dragon is a hero with power over the water - so I set to work to create a Dragon Guardian for Fionn.

I wanted this dragon to be a hybrid - a green dragon blending to red-gold.

I used silks, some red beads, metallics and a splendid red glass bead for the eye. 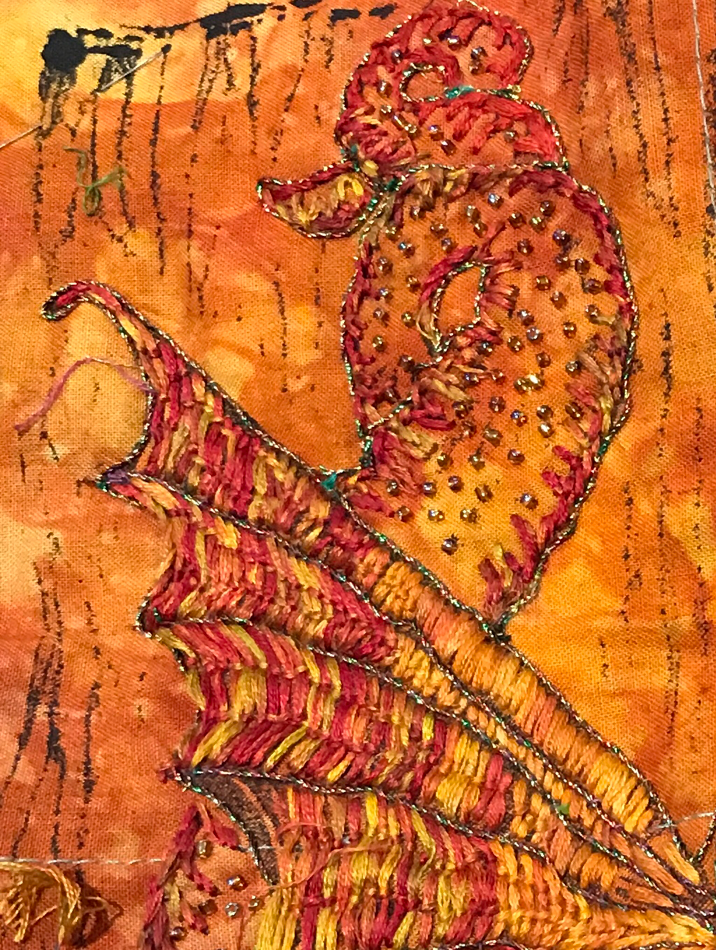 I couldn't go past the overdyed stranded cotton that I bought from the Guild earlier this year - it has a dragon's name on it! 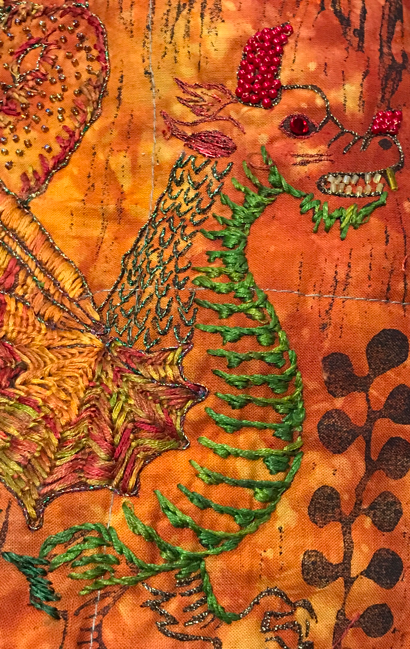 I'm not sure why I was so sure of the green on the dragon - surely not a hang-over from the Hobbit drinking song in Lord of the Rings? Maybe it was the lure of some bright green silk.

I found a lovely dark green silk for the plants and practiced my colcha stitch. 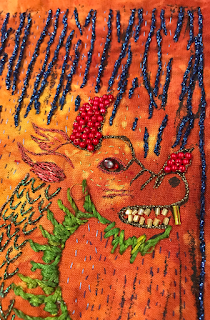 The background is midnight blue Madeira metallic  and I filled the spaces between with running stitch in stranded cotton. 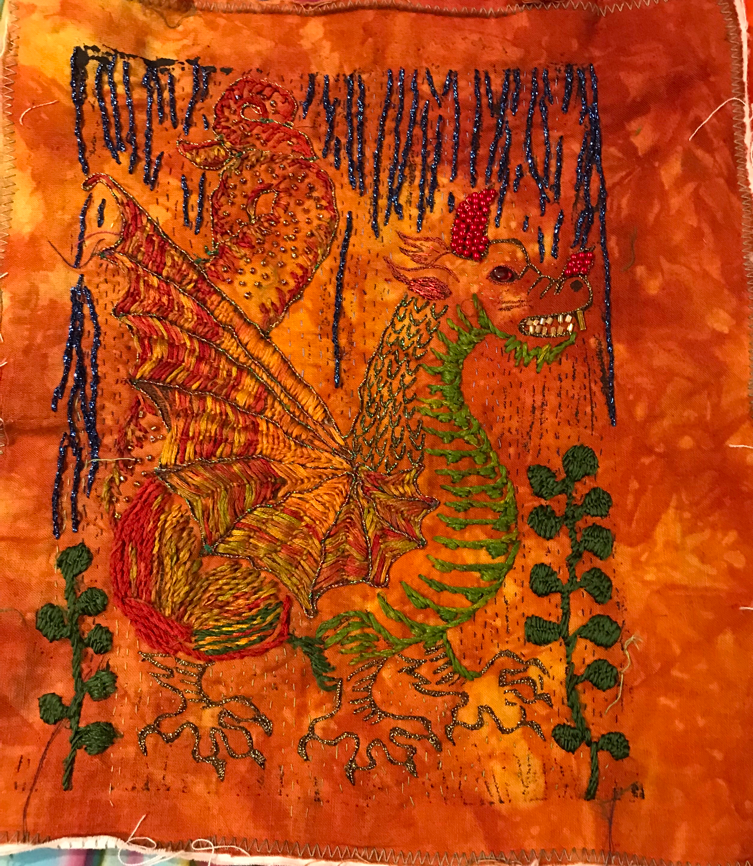 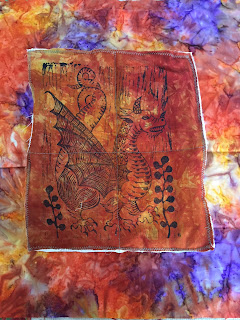 I had purchased batik on which to mount this dragon but didn't feel I had enough. I thought he deserved a bigger cushion than my half-metre would make. I considered ordering more but also thought he got a bit lost in the gold of the batik. 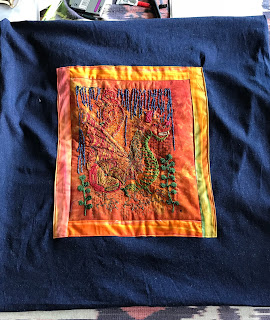 I remembered a large quantity of dark denim I had bought a few years ago, got it out and rather liked the contrast. I washed it and set to work


It is quite a different look to the Sentinelle but I like its strength and boldness. Hope Fionn does too!
Posted by Jillian at 10:38 AM No comments: Links to this post