I have been on my annual jaunt to England for the Crewel Work Company's Embroidery Retreat. Now back in Adelaide, I am in self-isolation for  14 days, and catching up. If anyone wants to read of my retreat experience and associated travels, you can do so at https://jillian-england2020.blogspot.com/. I am continuing that blog while in isolation.

Back to the Quilt
The quilt I made in 2014, from paper-pieced hexies from fabric left-over from sewing projects dating back to the 1960s, has been in use on my bed each winter since then. 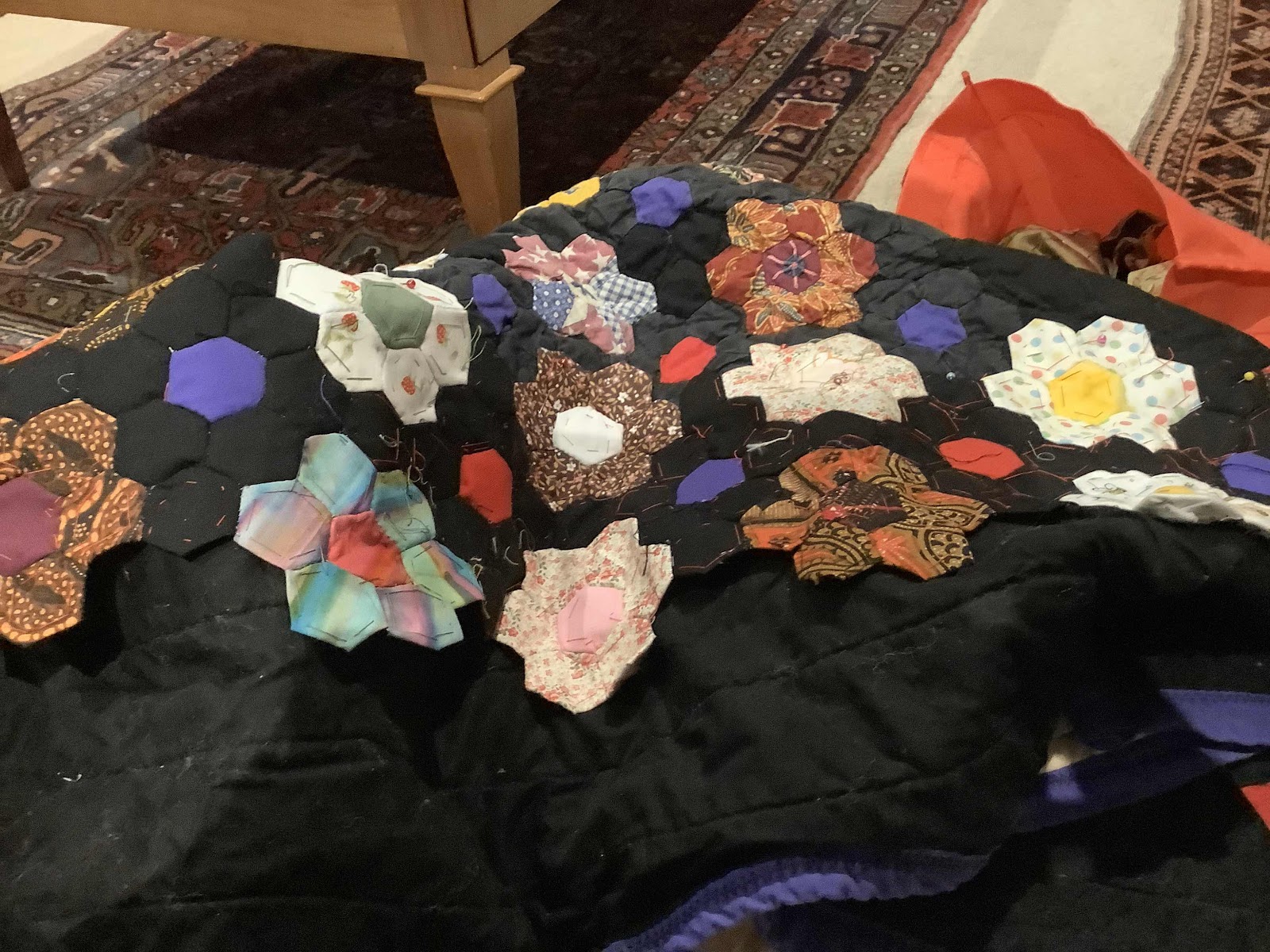 However, when I had it cleaned two years ago, the dry-cleaner pointed out that the wadding had begun to leak through the machine stitching rows on the plain black borders. The shedding wasn't too bad but after that I washed it myself, rather than having it dry-cleaned.  At the end of last winter, however I decided to cover the black borders with more hexies. 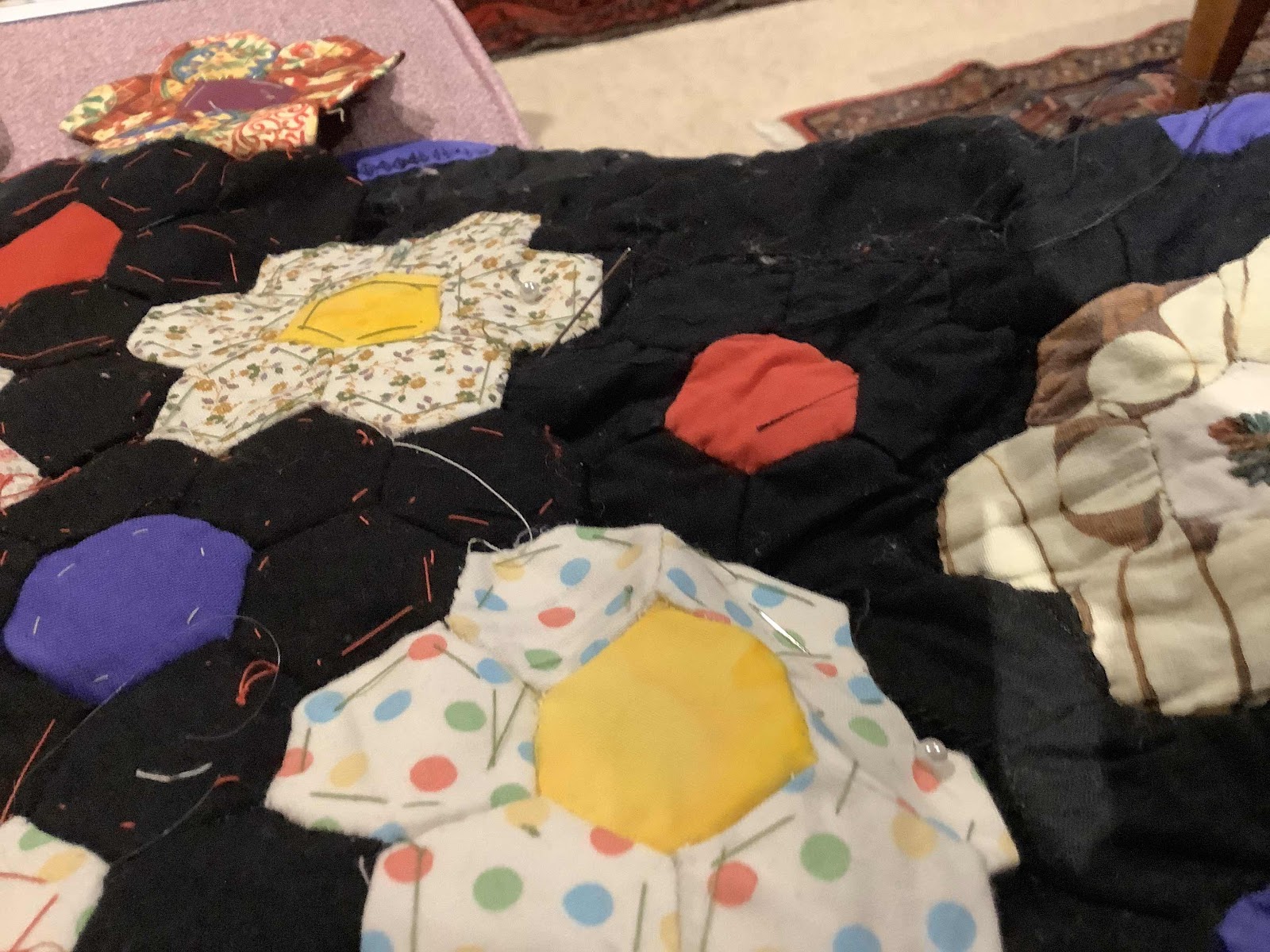 I had some spare 2" fabric squares left from the project, and a few papers. Over Summer I slowly created hexies to add to the quilt. I figured I needed about 160 extra coloured 'flowers' and maybe 90 extra black ones.


As I began to applique the completed hexies, I realised I could get away with only adding the coloured ones. The black background on to which I was appliqueing was sufficiently covered by the coloured hexies not to leak further - especially if I added in the purple and red centres where the black hexies would have gone. 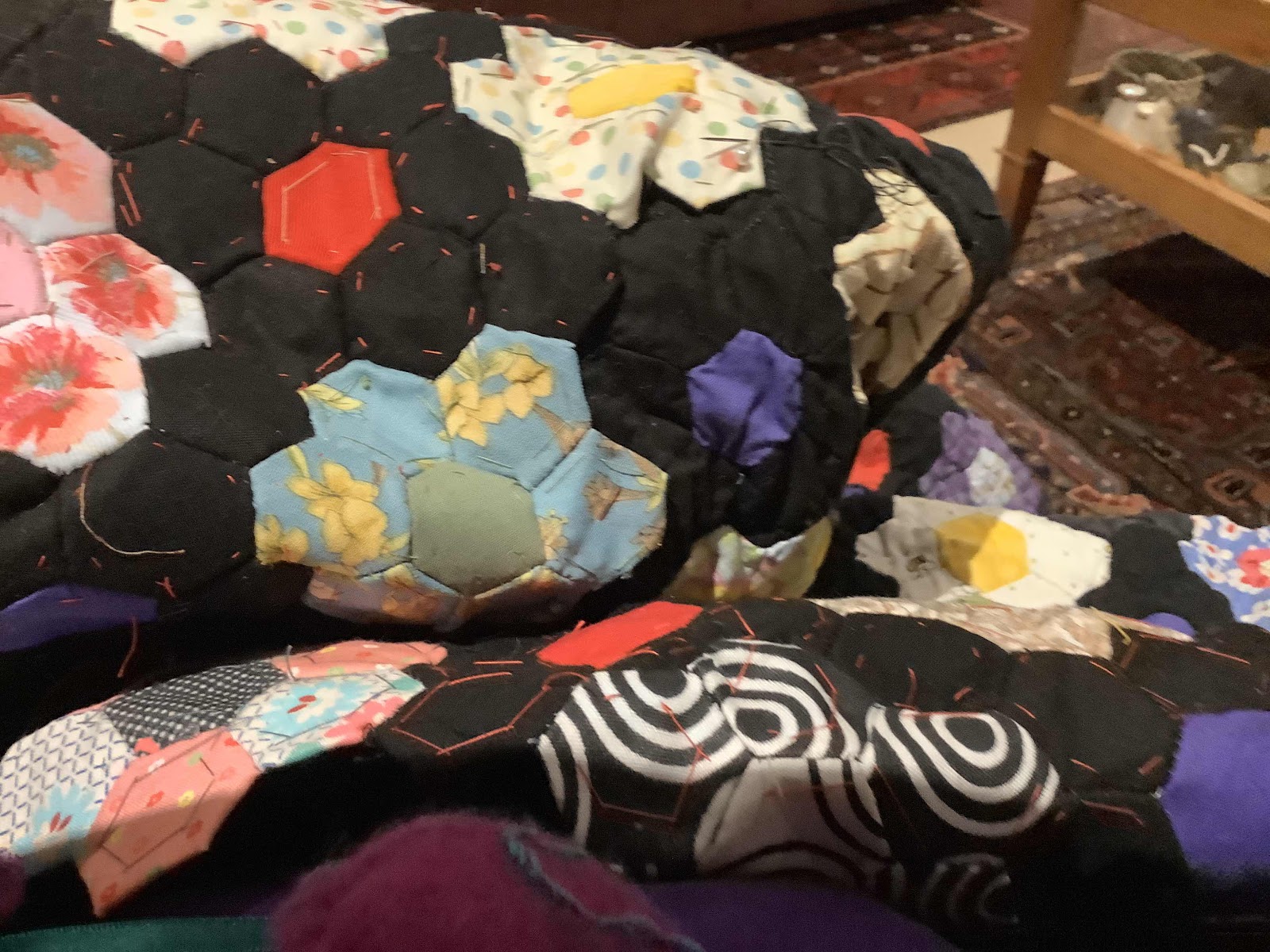 I was constructing the hexies in horizontal rows. I had made black hexies for a couple of rows, so used those, but after that reverted to simply adding the coloureds. 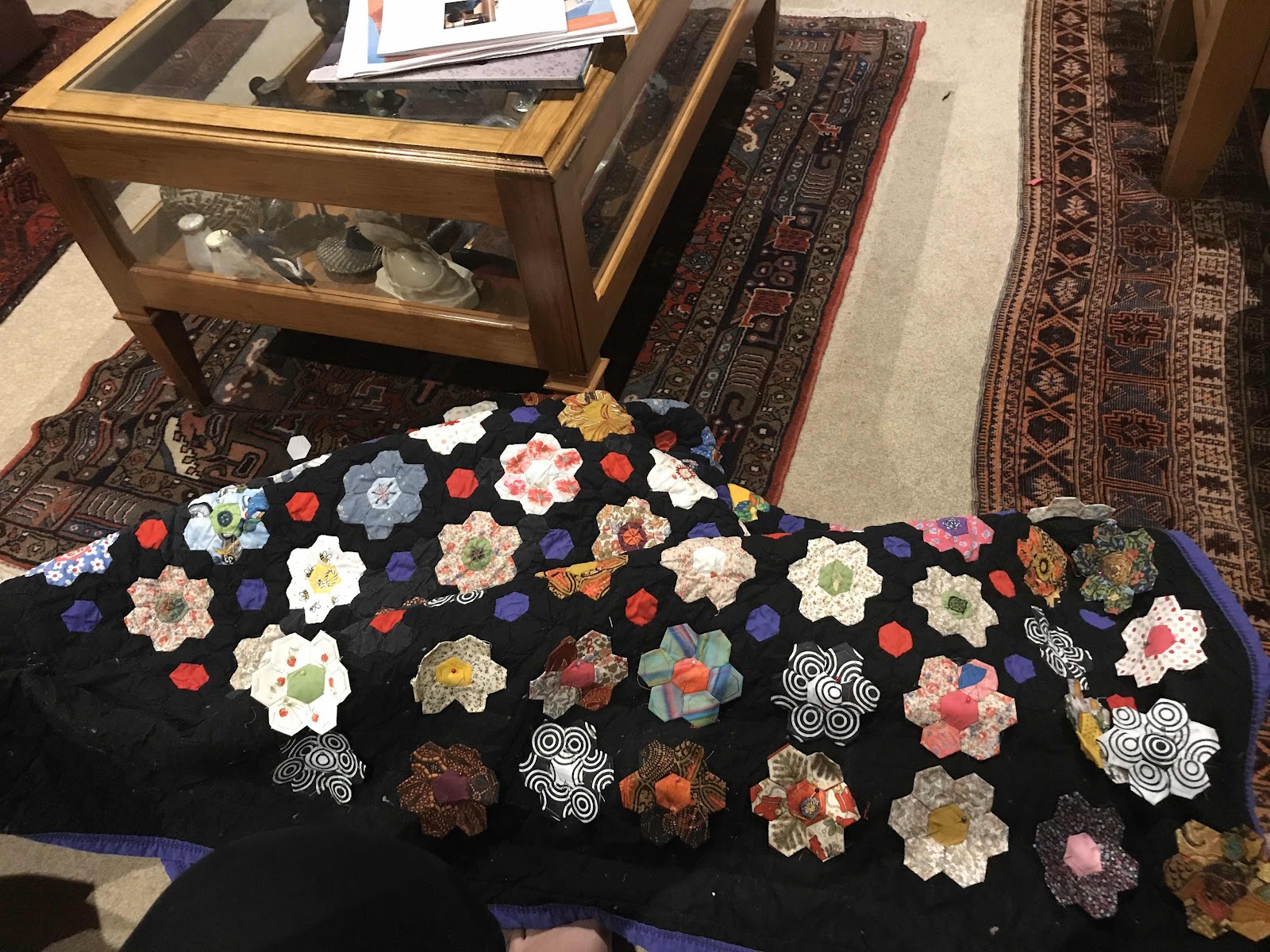 It is cumbersome work, but effective. The quilt is looking better already. 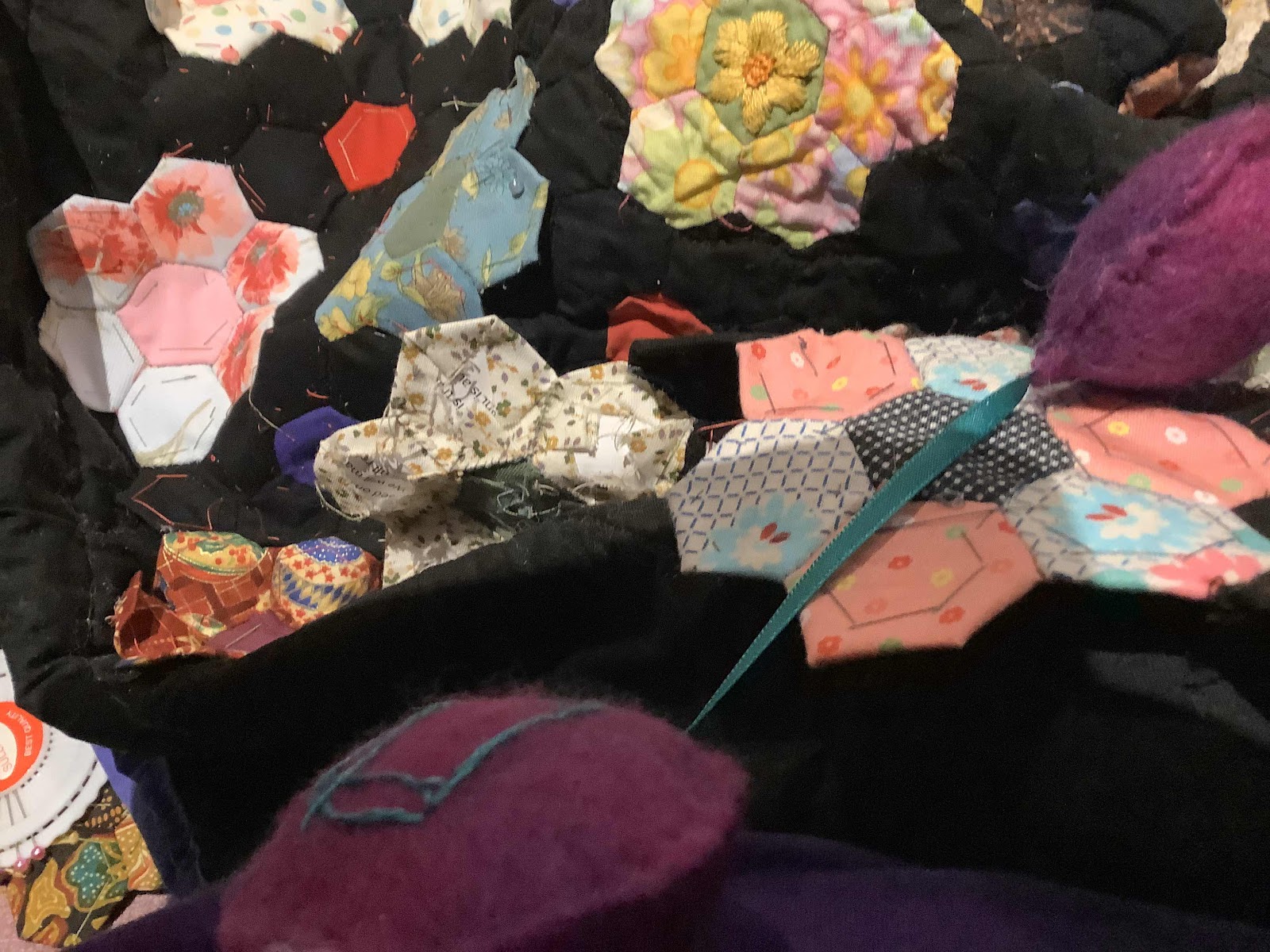 Because of the need to pin the hexies, and the awkwardness of size, The pincushion necklace that Niamh made me for my birthday has come into its own - so much easier to have the pin cushion always around my neck! 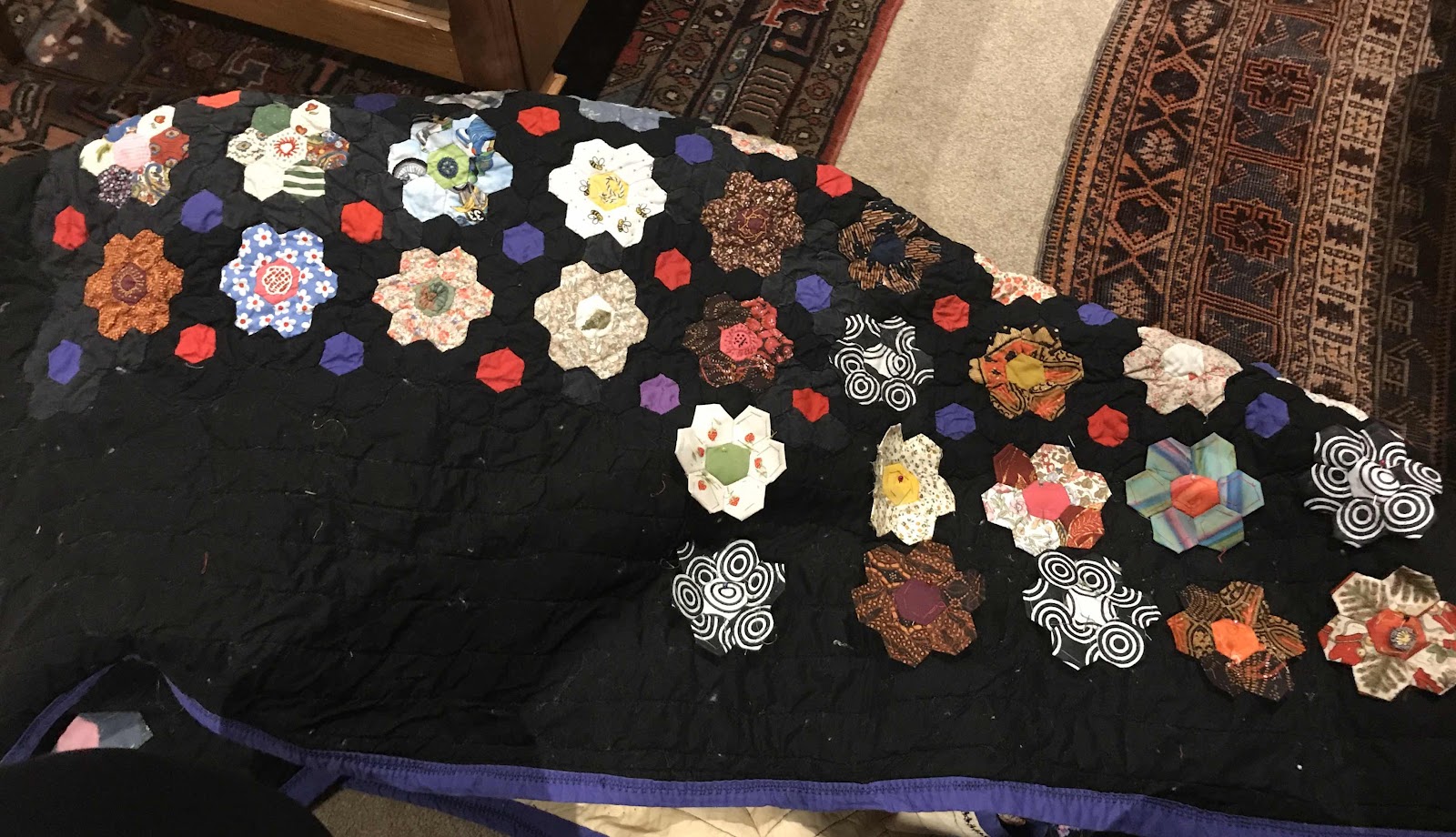 I got, I think, 82 hexies done and attached before running out of already cut fabric. At this point I decided to call a halt for a bit. I had covered two sides and part of the third. 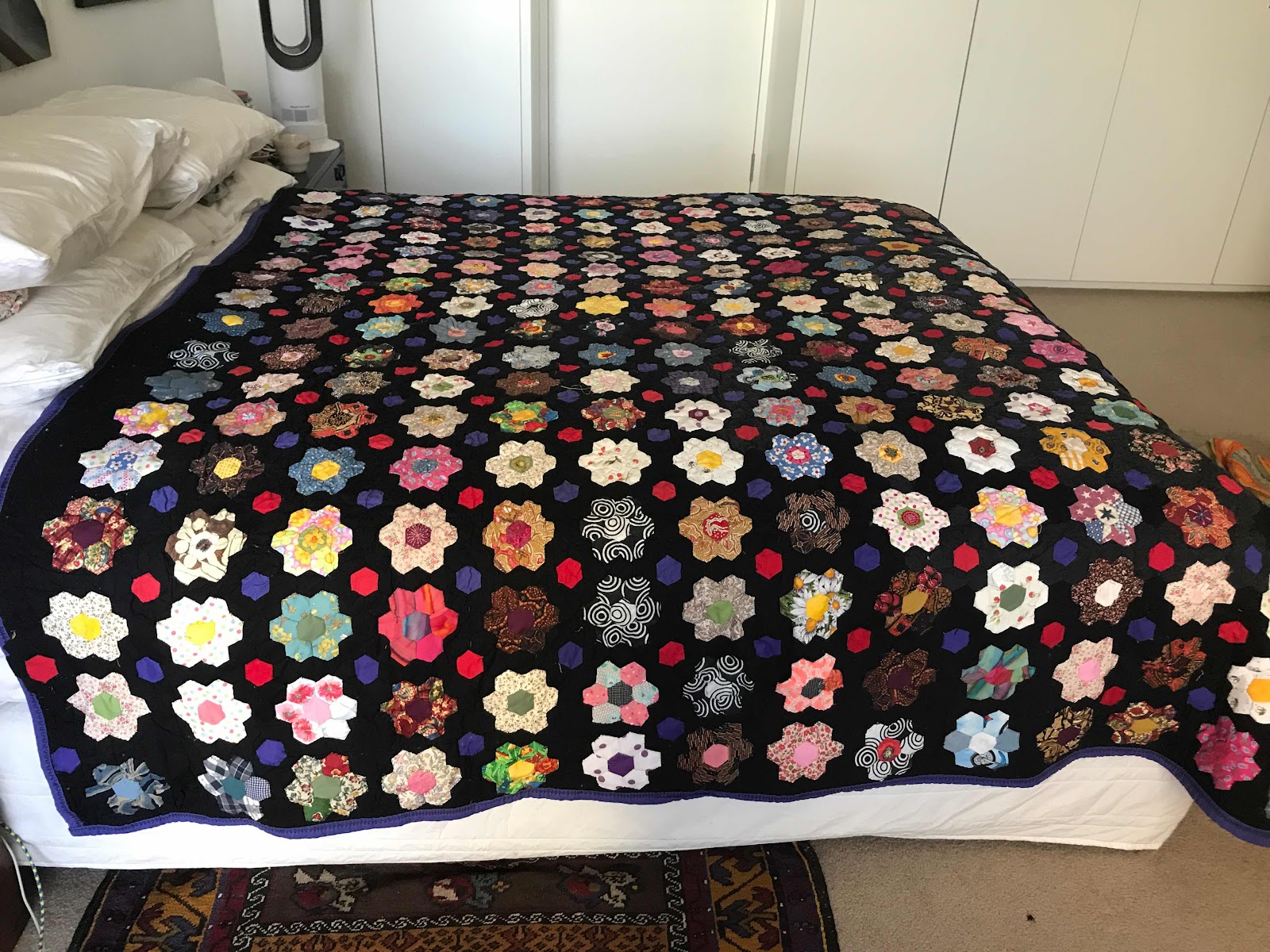 When I arrived home from England last week, I quickly decided it was time to swap my summer quilt for my winter quilt, to it is now on my bed.

My plan now is to construct the remaining hexies (about 78) and add them in batches.


Posted by Jillian at 7:37 PM No comments: Links to this post