My last post on this project was from Windermere in March. This is the Jenny Adin-Christie project that we worked on at the Lady Anne's Needlework Spring Retreat. While a small piece, it is very detailed, with many steps and techniques. We had done something from each step but there was a lot of work to do to complete each one. My last photo from Windermere shows where I was up to. 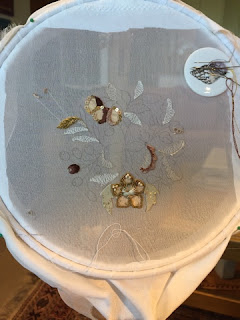 I did not carry my work from the retreat with me while travelling. I didn't have a sitting frame with me and the work demanded greater care than I could give it. The Crewel Work Company kindly packaged and sent my projects on after I arrived home. It was only in early May that I had the instructions and projects set up and ready to go. I have been working on this one ever since - and not taking time out to write up my progress! 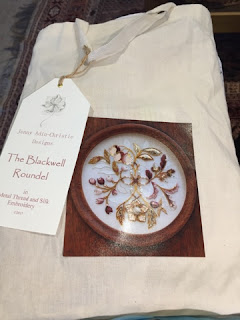 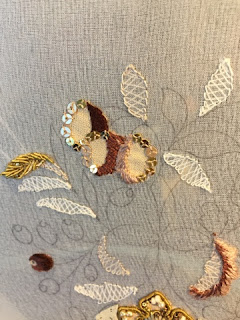 Jenny's instructions are also very detailed and sequenced. I went back to the beginning and worked my way through the project in order of the steps Jenny laid out. It mostly went smoothly - but in one place came close to disaster! 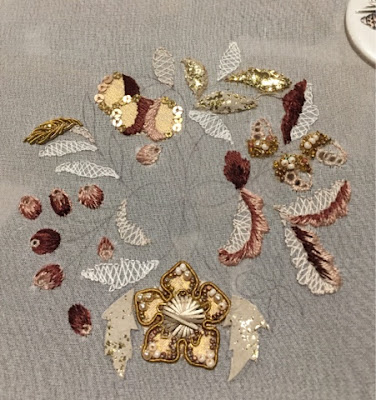 The photos show my progress. It is delicate work - requiring (for me at least)  good magnification. I used a number of different magnifiers before settling on one attached to my daylight floor lamp. 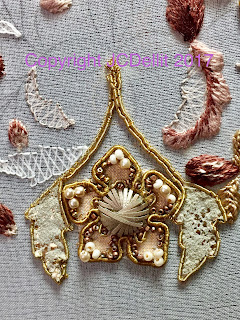 I was doing quite well to this point. Then my attention faltered and I made an error in identifying the gold pearl purl I needed to couch down around the leaves and stems. Instead of the pearl purl, I used the cut purl, struggling to couch it (unsurprisingly, since it is designed for threading!). I persisted and got it almost finished with the wrong purl before I worked out what I had done. 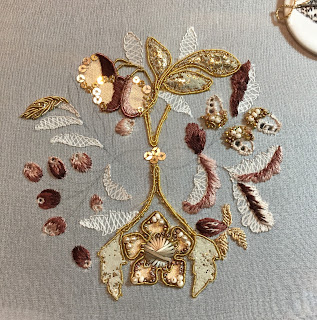 Some of it I could undo. Other sections, however, I was very reluctant to try to undo, given the silk organza on which the project is worked and the closeness of the fine couching. I opted for undoing where I was confident of not damaging the fabric,  and laying the real pearl purl over the other where I was not confident. Here you can see the real pearl purl laid around the outside, or on top of the wrong one. I then covered the mistake with gimp or the second row of pearl purl, or removed what I could. 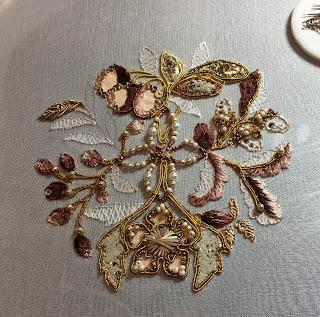 I am writing calmly about this, but it rattled me and I am wincing at revealing the error in photographs. I had been so careful and followed Jenny's extensive and meticulous instructions so carefully, but made an assumption about packaging that was quite wrong - and in retrospect foolish. It came close to ruining the project. I recovered, but not without making significant compromises that a skilled needleworker's eye will pick up easily. I have progressed the project with some further imperfections - but nothing so dramatically wrong.. I tell myself that there is no way I would get this perfect with the limited experience I have of goldwork, and working on my own. 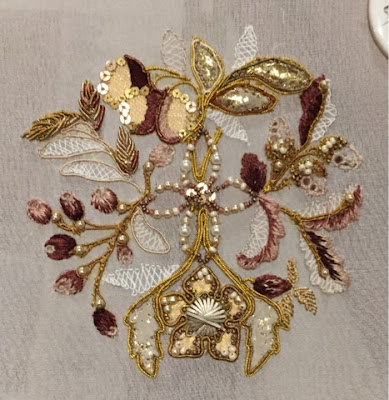 Here is the finished piece. I've learnt a lot from doing it, and am pleased to have finished it.  It isn't going to become my favourite kind of embroidery, and my eyes will be pleased to get back to  more forgiving techniques (not, however, before I finish the Nicola Jarvis whitework piece from the same retreat!).


I have ordered the small round box Jenny has designed for this project - it isn't the kind of thing I can put on a bag!

I am also grateful to Jenny for proof-reading this post and fixing my terminology. It is the generosity of a busy and committed expert. Thanks Jenny, on so many fronts.

Posted by Jillian at 4:03 PM 4 comments: Links to this post

I recently attended a most enjoyable one-day class at the Guild to make on Ort pot. Orts are the left-overs, for embroiderers mostly bits of thread or small scraps of fabric. The word derives from Middle English 'orte' meaning food scraps, which was, in its turn derived from either Dutch or German. 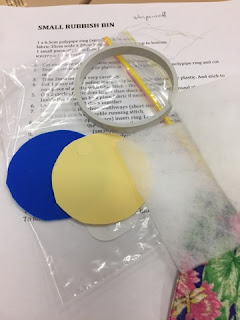 Gay Sanderson, a long-term member of our Guild, has come up with an ingenious design for a small, personal, portable ort bin to carry with you and collect those annoying threads such as I leave all over the house - and anywhere else I go.  Gay has enlisted her husband Peter to cut the rings of polythene pipe that are an essential part of the kit for this project. I had purchased a kit for one of these some time ago, but hadn't got around to making one. When Gay offered a class, I figured enrolling was a way to tick off one more project on my list. 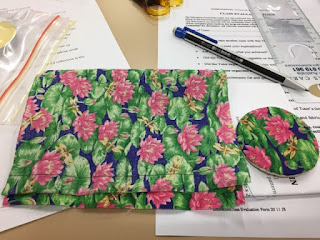 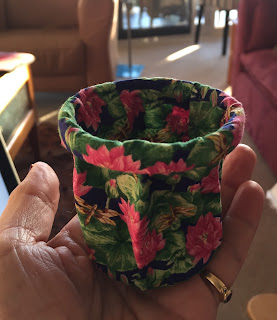 By early in the afternoon I had my completed pot. 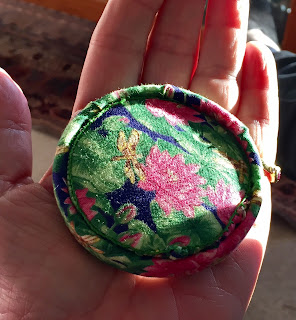 The big attraction is the way it folds up to fit in
a work box, bag or basket. It takes up less space than scissors. 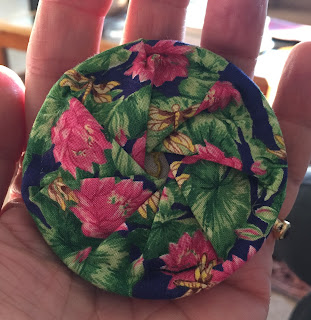 As I finished with time to spare, I embroidered an initial on the base between the folds.

I have actually been using mine at home while working on my Jenny Adin-Christie roundel from my recent embroidery retreat. 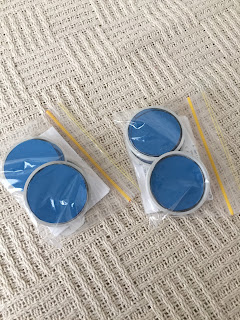 Of course, at the end of the class I was so enthusiastic about my little ort pot that I bought another 4 sets of rings and circles so I could make some more with friends, or as gifts, so ticking this project off my list does not reduce my list at all. They are, however, objects I can make while travelling, talking or watching TV. I don't actually need any more projects for travelling, talking or watching TV.  They were such good fun to do that I'd like to share them with others - perhaps my SitnStitch group will be interested.

Posted by Jillian at 7:47 PM 3 comments: Links to this post 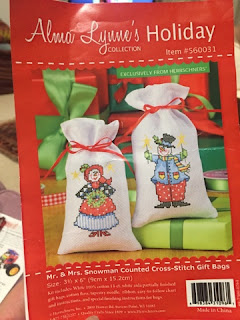 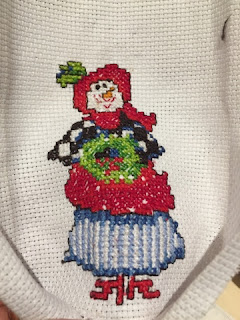 I won't comment on the absurdity of Mr and Mrs Snowman fully decked out and wearing shoes, nor on their relevance to Australia. I liked the look of them, found them soothing to stitch and smiled as I counted my stitches on the easy Aida fabric.

The bags were partially made up. When the stitching was done you joined the back seam and hemmed the top. I used a herringbone stitch on the inside, giving a running stitch effect on the outside. I then threaded the ribbon through the Aida as a draw-string, rather than just tying it around the outside of the bag as the kit instructed. 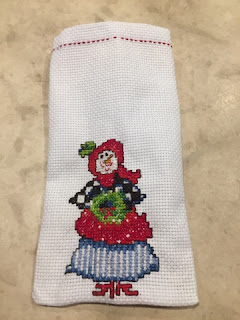 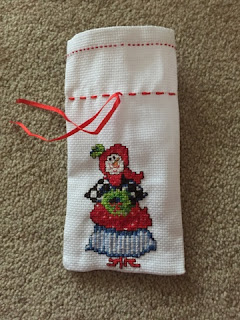 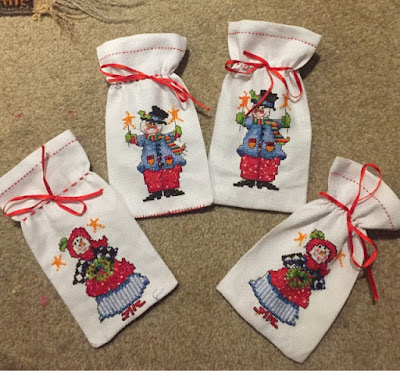 I had found two of these kits in my stash, so, ever a finisher, I thought I should keep going and finish all four bags.

Just a few hours after I had taken this photo and put the bags away for next Christmas, I found yet another one of the kits in my stash! Common sense might suggest I leave it for another day, but, no, I was determined to clear my slate of this purchase, so got on with the last two bags as 'down time' between more demanding projects. 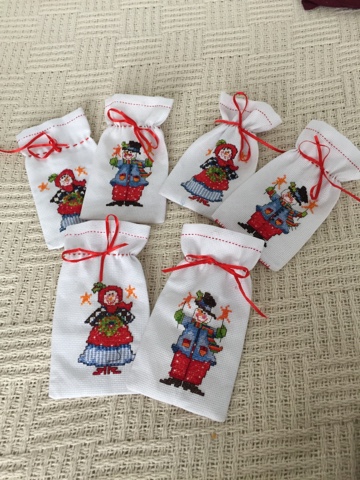 I have enjoyed their cheerfulness and simplicity. I've been looking at my books of cross stitch patterns for ideas to create more simple bags from my stash of Aida! In my spare time.
Posted by Jillian at 12:03 PM 3 comments: Links to this post 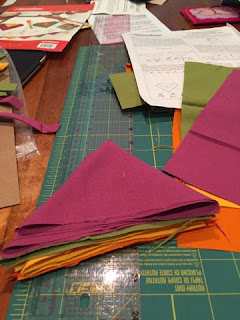 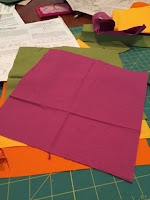 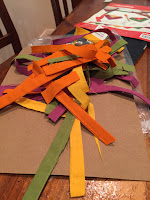 The serviettes have their hems removed and are then cut into squares and rectangles of specified sizes. 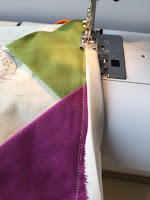 The smaller squares are folded into triangles and stitched to the bottom hem - a bit like bunting. 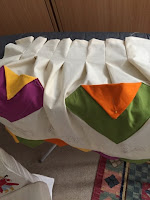 The calico is pleated. The larger squares are stitched back to back and stitched on as pockets. 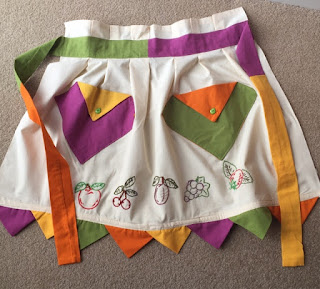 My younger granddaughters helped me cut out some of the pieces for this project. I thought it a bit big and wanted to make a smaller version, but Niamh liked it as it is and laid claim to it  - identifying it at once with Little House on the Prairie. 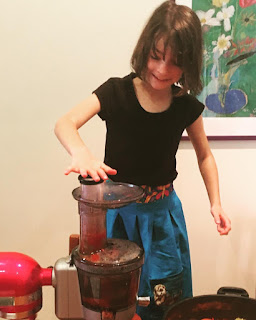 Of course, that called for a second, quite different apron for Veronica. I thought I had taken more photos of this in the making - but the photo fairies seem to have made away with them. This is the best I can do!

Posted by Jillian at 4:46 PM 4 comments: Links to this post