I did like the red surround on the magazine version of In Good Time,  but I wanted a smaller cushion, reminiscent of a crewel cushion I worked on linen in 1972 - now in need of significant repair.  I considered backing the cushion in red, or dark green or blue, but in the end went for cream, using a remnant of blanketing that I had. 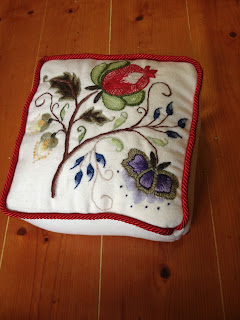 I purchased some red piping and created a brick-like cushion. 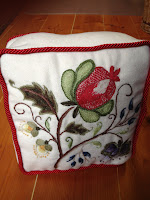 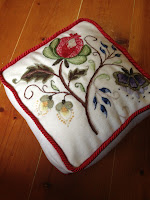 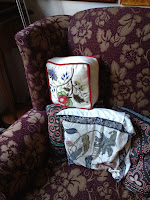 This made up part of a birthday present for Jim.  If it proves to be too brick-like I will reduce the depth.
Posted by Jillian at 4:36 PM

It looks fantastic with the red binding. I like it smaller too.

this has worked perfectly