In late April I attended a class organised by the Embroiderers' Guild of SA on Celtic Knots and Cables. It is a venture into a slightly different stitching world to the one the Guild usually inhabits. I went along, partly for that reason, and partly because I like knitting cables and I was interested in learning a bit more.

Kathryn had prepared an enticing kit with notes, two balls of cream wool, embroidery thread and two prepared iCords. She also had a range of coloured wools for which we could swap our cream balls. I chose a blue. 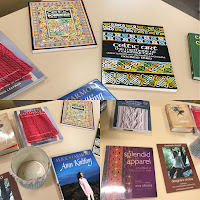 We were also able to browse her selection of relevant books.

We began by looking at a range of knots, prepared by Kathryn, from simple to complex. We then used one of our iCords to make a fairly complex knot, following a diagram. It was moderately difficult but informative. The knots  have lots of potential for three dimensional embroidery. 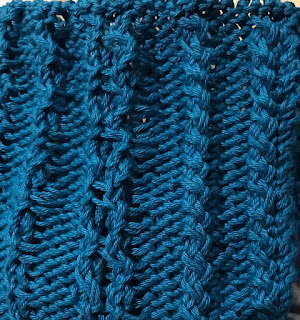 We then got stuck into knitting cables. We were all keen to get knitting - perhaps,in retrospect, I might have benefitted from examining the cables before I plunged in. I ended with a much improved understanding - mostly from making mistakes!

The bag which was our sample project had 6 cables, all different.

I chose to knit in the round - a decision I'm pleased I made. I knitted the circle base on 5 double-pointed needles then changed to a circular needle and followed the cable pattern. This got me started, but didn't help me to understand the cables. It was only when I stopped following the chart and began following the row below that I was forced to work out how each cable was working. 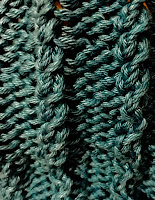 Cleverly, the cables were designed mostly with a one-stitch cross-over, so they could be worked without a cable needle. It was a great way to demonstrate - by feel as well as diagram - how cables worked. 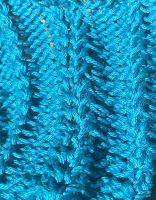 As well as the obvious contrast of left-over-right versus right-over-left cables, we saw the effect of adjacent single-stitch cables going both the same and opposite ways - also a three-stitch plait. 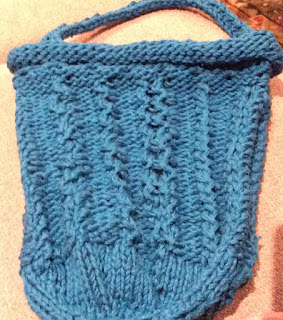 The designing of the cable exercise into a bag was especially clever - and pleasing to my practical soul. I finished the bag quite quickly at home. I also added a knitted handle.

Because I had chosen to change my cream wool for coloured, the iCord that Kathryn had so generously provided did not work with the bag, so I made another in the same wool. I chose to do this by French knitting (what my South Australian-born colleagues call Tomboy) rather than knitting.

It's a long time since I did French knitting, but it worked up quite quickly.

The resulting bag has errors in the cabling - but records my learning and is really useful for holding my current knitting project!

Thanks to the Kathryn, my fellow students and the Guild for the workshop.
Posted by Jillian at 9:27 PM No comments: Links to this post

This post arises from an Embroiderers' Guild of South Australia Certificate Workshop taken by Christine Bishop in January of this year. These monthly workshops are primarily for those enrolled in the Certificate Course, but any Guild member can attend. Those enrolled naturally get the first call on the teacher's time.

Estense embroidery hails from the Ferrara region of Italy and is based on the Graffito ceramics of that region in the Renaissance period. It has been documented and popularised by Elisabetta Holtzer, first in a 2007 book, now out of print, Ricamo Estense, which did have English translation by Jeanine Robertson, and then in a 2014 manual, Il manuale completo del ricamo estense which has only Italian text. 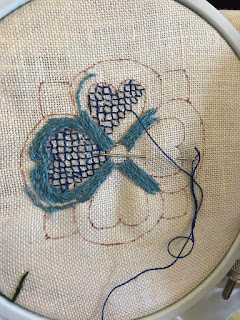 Christine had adapted a couple of designs for us to work on linen. I worked on a stylised flower and a leaf. The colours and designs are both from the Ferrarese ceramics. The embroidery uses a limited range of stitches, with the drawn thread work typically inside the surface stitchery. 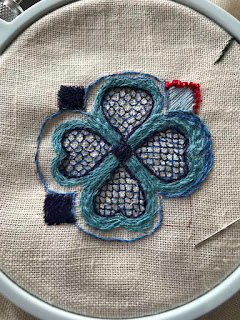 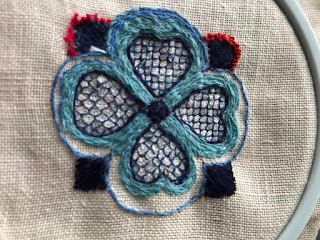 It was lovely to work and I continued to play with it long after the class. I didn't write about it sooner, because I wanted to do more of it, and to turn my piece of linen into something usable.

On an impulse I took it to England with me and found it worked well as a pick-up/put down project. I found the level of concentration worked well to take my mind of time passing and focus on the stitch. 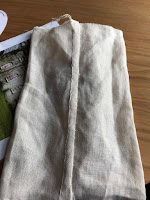 I worked a flower and two leaves, then folded the linen to form a small bag and hand-stitched the back and bottom seams. 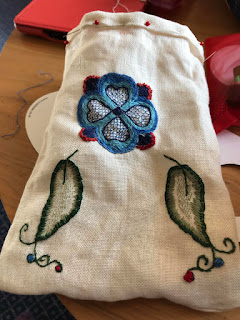 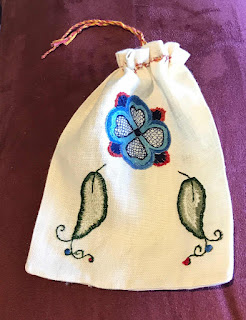 I then folded a hem at the top and worked drawn thread eyelets to hold the hem and take a drawstring. 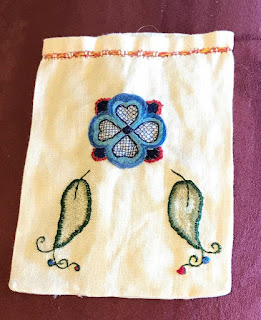 I made a twisted cord drawstring, When I got home I ironed it, and voila, a pretty little linen bag.

Christine is offering a two-day class in Estense Embroidery at the Guild in August, available to  both members and non-members. I have enrolled!

I have. over the last seven years since doing an Ottoman Scarf class with Alison Snepp, embroidered a number of scarves. Most of these were Raffal scarves, purchased as a follow-up to Alison's class. They are woven in India from Australian wool. The Raffal story is worth reading, a successful business established by one woman using the expertise she gained from working for the Australian Wool Board, utilising Australia's fine merino and the expertise of Indian weavers. 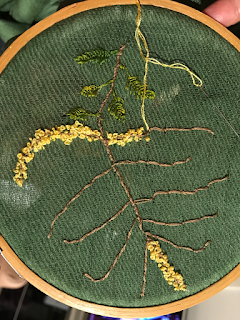 I am not sure if Raffal are still making perfectly plain scarves, but I had a couple left from my earlier purchase, and wanted to embroider one of them as a gift for a cousin who had kindly invited me to stay during my recent trip to England. I purchased scarves in colours that reflected the Australian bush, so chose a green one, sketched out some wattle branches and got to work. 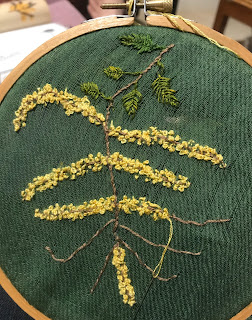 It is a little tricky embroidering on these soft, open weave scarves. They resemble original Turkish bath towels - which is why Alison Snepp chose them for her original Ottoman scarf design. This means, however, you need to take great care in stitching, not to separate the fibres.


You also need to take care that the back is fairly neat - as scarves don't sit obligingly on one side. These considerations limit the stitches you can use. 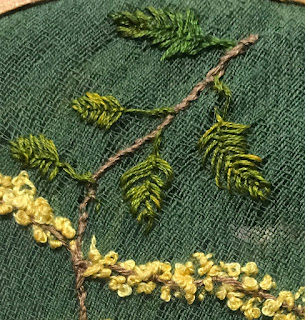 I limited myself to French knots, stem stitch and fly stitch. 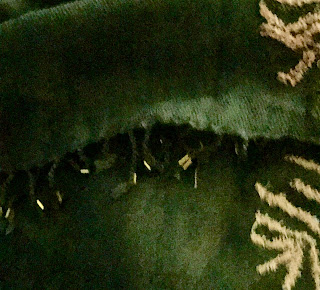 Rather than adding larger tassels to those already there, as I had done in the past, I added gold beads that sparkle. It's not too over-the-top but adds little glints as the scarf moves. 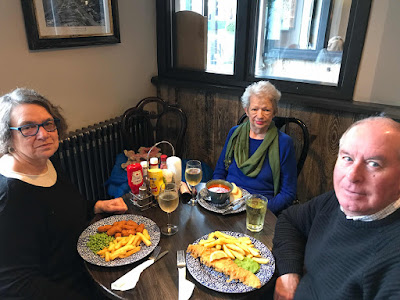 It worked - and is something that will get some use in England!

Posted by Jillian at 12:06 AM 2 comments: Links to this post