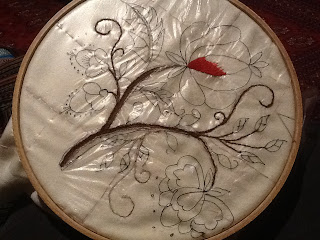 There were two projects in Inspirations 78  that I really liked and wanted to make: Alison Snepp's Men of Skyros and Di Kerschner's In Good Time. I ordered the kits for both and had to wait a few weeks for the threads to come in.  I began In Good Time early in June.

Somewhat reluctantly, I followed the instructions and used water-soluble stabiliser to trace the design, since it is stitched on wool flannel. It fitted well into the 12 inch hoop of my sit-on frame. 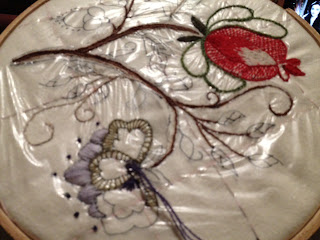 The problem with the stabiliser is that it splits as I stitch it - especially, I find, along long straight lines such as the stems. That means I lose the exactness of the surrounding design. To minimise this effect I decided to outline design rather than following the suggested sequence. 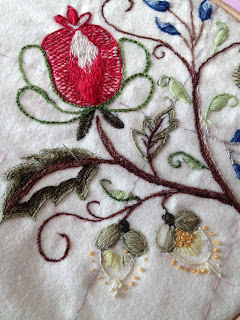 Once the design was outlined, I could remove the stabiliser and stitch from the instructions - much more satisfying.

An eagle-eyed observer will notice that I have traced the design in reverse. While I'd like to claim this as a deliberate decision, I did it unconsciously by reversing the stabiliser when I placed it on the fabric. I discovered it after I had basted the layers together - around the edges, the diagonals and the half-diagonals. At that point a reversed image looked great! 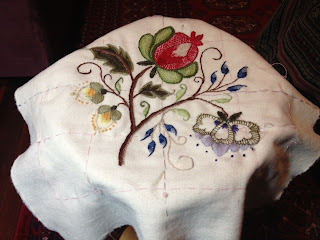 There are some really lovely elements to this project - great colours, easy to see where you are going and a logic to it that gives you freedom as a stitcher. 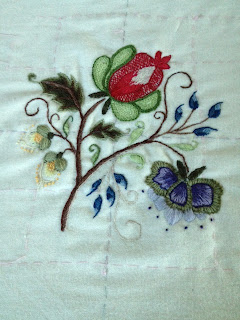 I am going to construct it a bit differently to the original as I want a small cushion, rather than the large one suggested. More on that soon.
Posted by Jillian at 4:00 PM

It's a beautiful project, and you have done a great job!

I hate that jelly-like stabilizer too, and I will go to any length to avoid it! Now you have given me another reason to do so, because I didn't realize that it falls apart as you stitch, although I suspected some kind of bad behaviour from it. :)

Thanks, Monica. As a child at Sunday School I remember going pin-pricking, making pin holes all around a cardboard figure. If you made the holes close enough it came out. You get the same effect from stabiliser!

Looks stunning Jillian. There are quite a few projects like this that I will do one day. Perhaps I might be able to spin my own threads. Only joking lol. Might take me a few more years to get my spinning that fine!

At the rate you're going it won't be too long, Katherine. It's not, however,as if you haven't enough to do already!

this is lovely surely will be an heirloom piece when complete. Have not tried the stabilizer and thanks to you will not bother too.

Thanks, Margaret. There may be some secret to the stabiliser that I don't know. I'll ask around next time I'm at the Embroiderers's Guild.