The November Certificate Workshop focussed on Colbert embroidery, named for Jean Baptise Colbert, Finance Minister to Louis XIV, who introduced a lace making to France in the 17th Century in an attempt to kick-start an industry. Colbert is an embroidery style based on lace designs. Like Assisi work, it is a voided style, but encourages more elaborate backgrounds and combines both counted and surface stitchery.

The workshop was prepared by Carol Mullan, but unfortunately,  Carol was ill on the day. We had her notes, and Mary Hall, who was attending as a student and had attended an earlier Colbert Workshop by Carol, stepped up and walked us through the workshop. 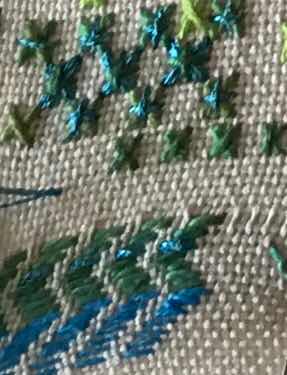 We began by sketching a curved shape which would become the void. I decided to use my initial. I was working on very open weave Lugana, about 25 count. From the threads I had brought along, chose a green perle 5, a stranded electric blue, a matching stranded metallic and a gold poly metallic.

I worked a tiny sample in a corner of the fabric. I was pleased to go against the Blue and green should never be seen without a colour in between mantra of my childhood! 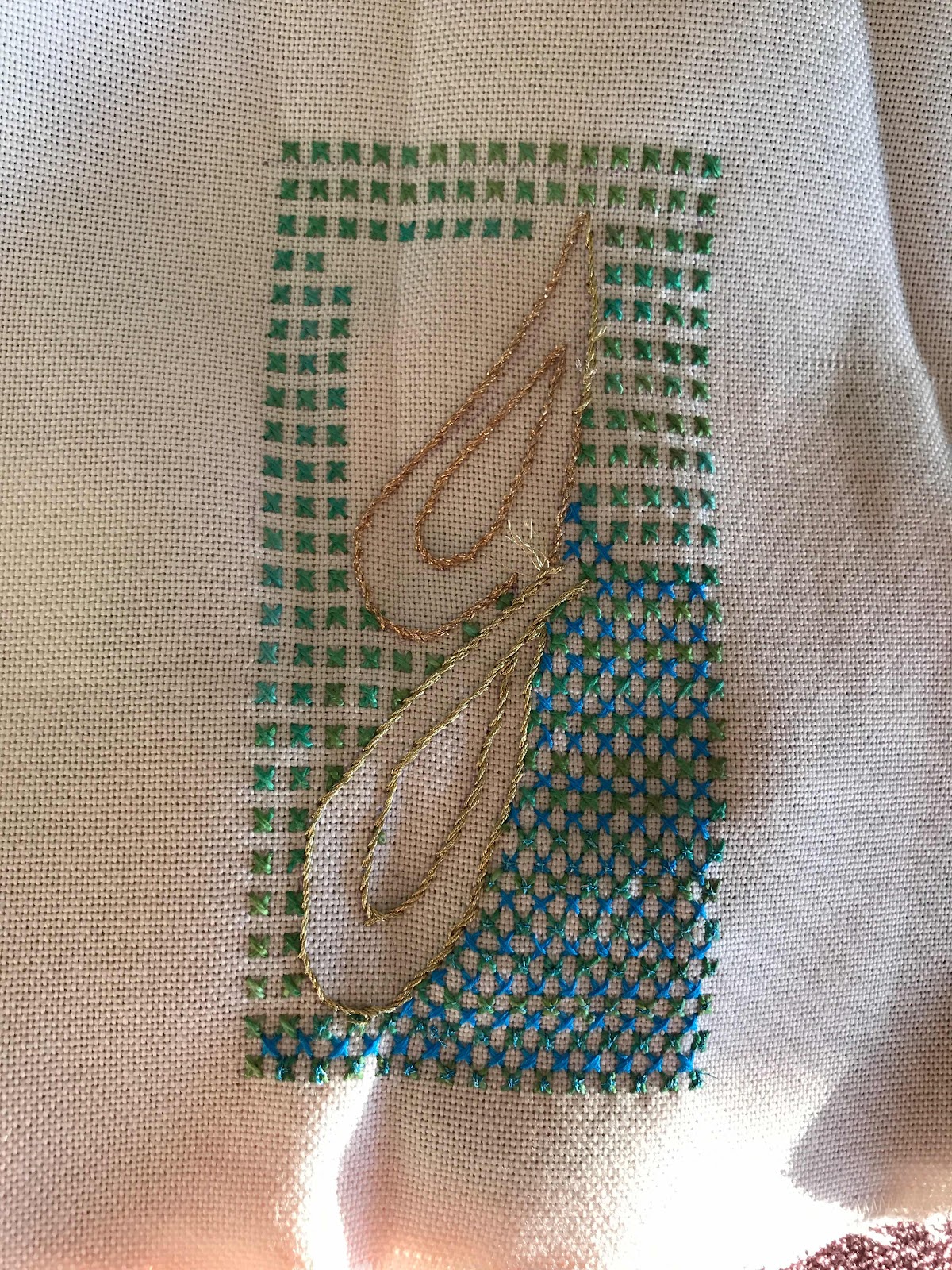 I outlined my initial in the gold,  then began to fill in the background using one of the stitch samples Carol had provided.

It was a great workshop. Everyone rose to the challenge of making it work without Carol. It was bad enough that she was sick - we owed it to her to use what she'd provided to manage our own learning. Mary did an amazing job of helping us as did the Course coordinators.

At home I filled the curved void with four-sided stitch. Around the first layer of background I put a border of running stitch arrow heads. There were challenges with tension. Most of these stitches are done by scooping rather than stabbing, which means holding in the hand rather than a hoop. 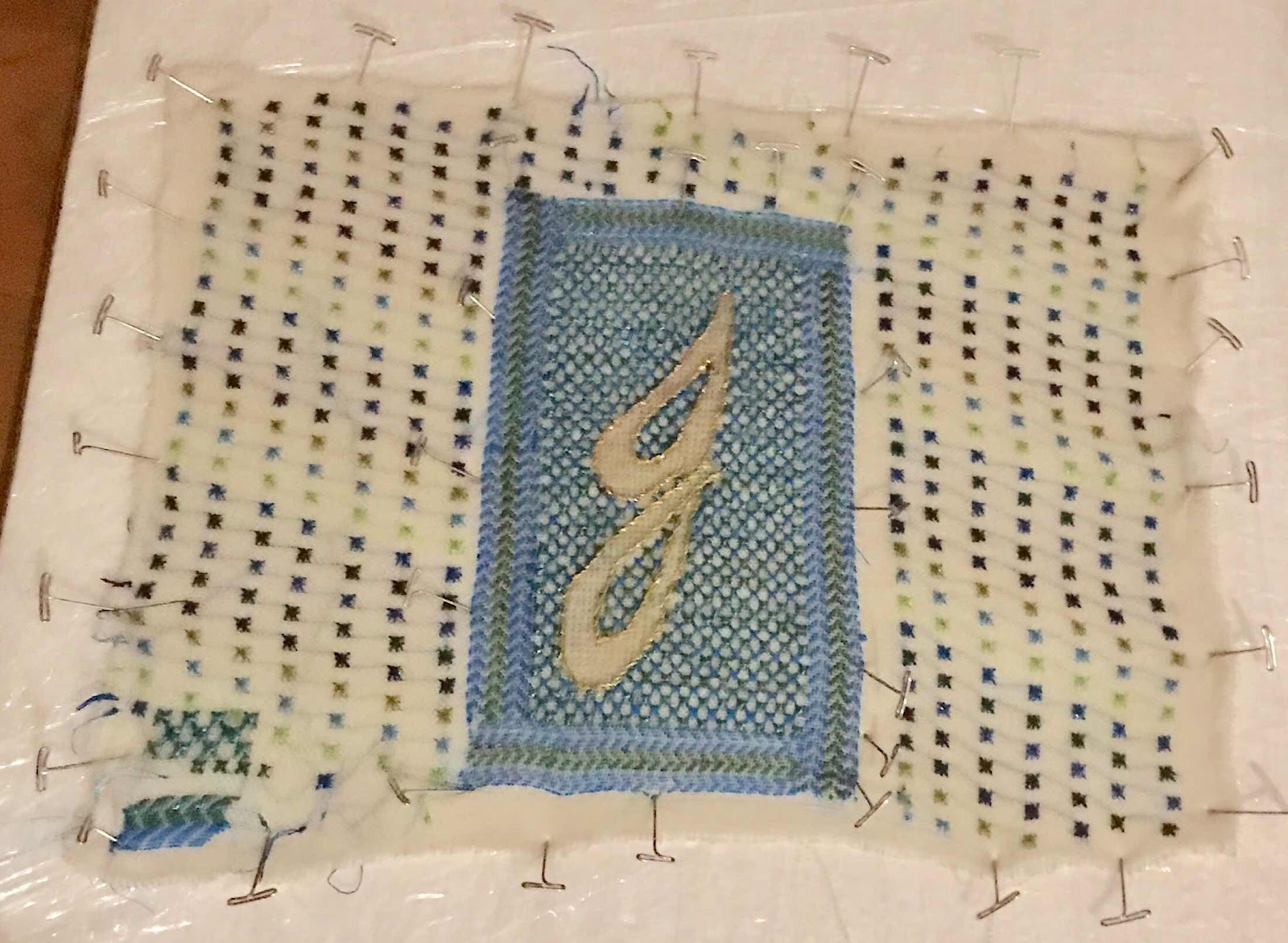 I had by now decided, of course, that I might as well use the whole piece of fabric to make a bag. I therefore worked another variety of the background stitches to cover the whole piece. For this I used some of my set of DMC Etoile thread - a soft stranded cotton with a touch of sparkle.

At this stage I blocked the piece to remove the bagginess created by the differing tensions.

I folded the piece, stitched a back seam and the bottom.  I added a lining from some of the fabric I had left from my River Matters project . It's a mix of cultures, but the colours work well. 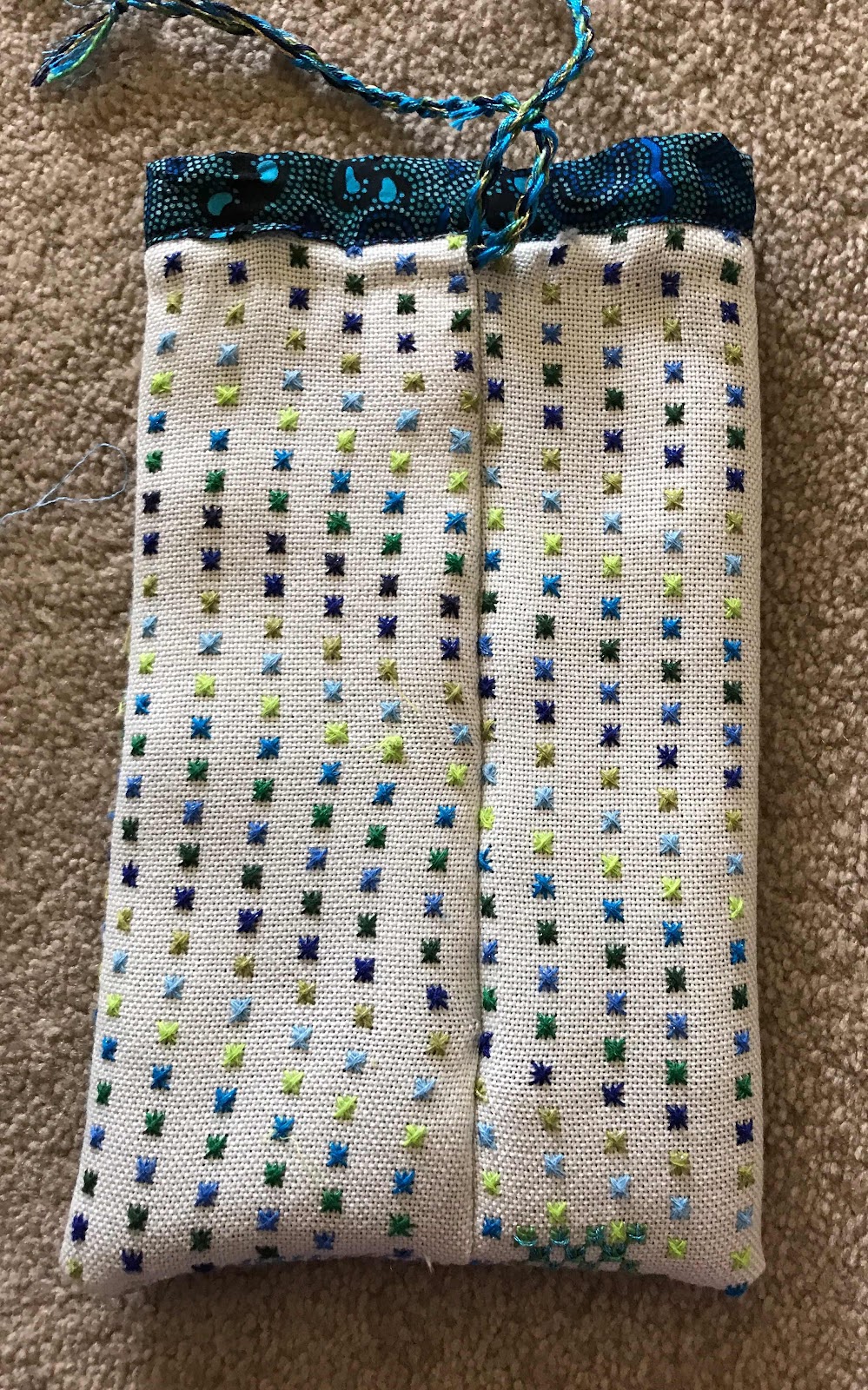 Notice that part of my initial sample stitches survives at the bottom seam. The twisted cord is made from strands of the basic threads used (without the Etoile). 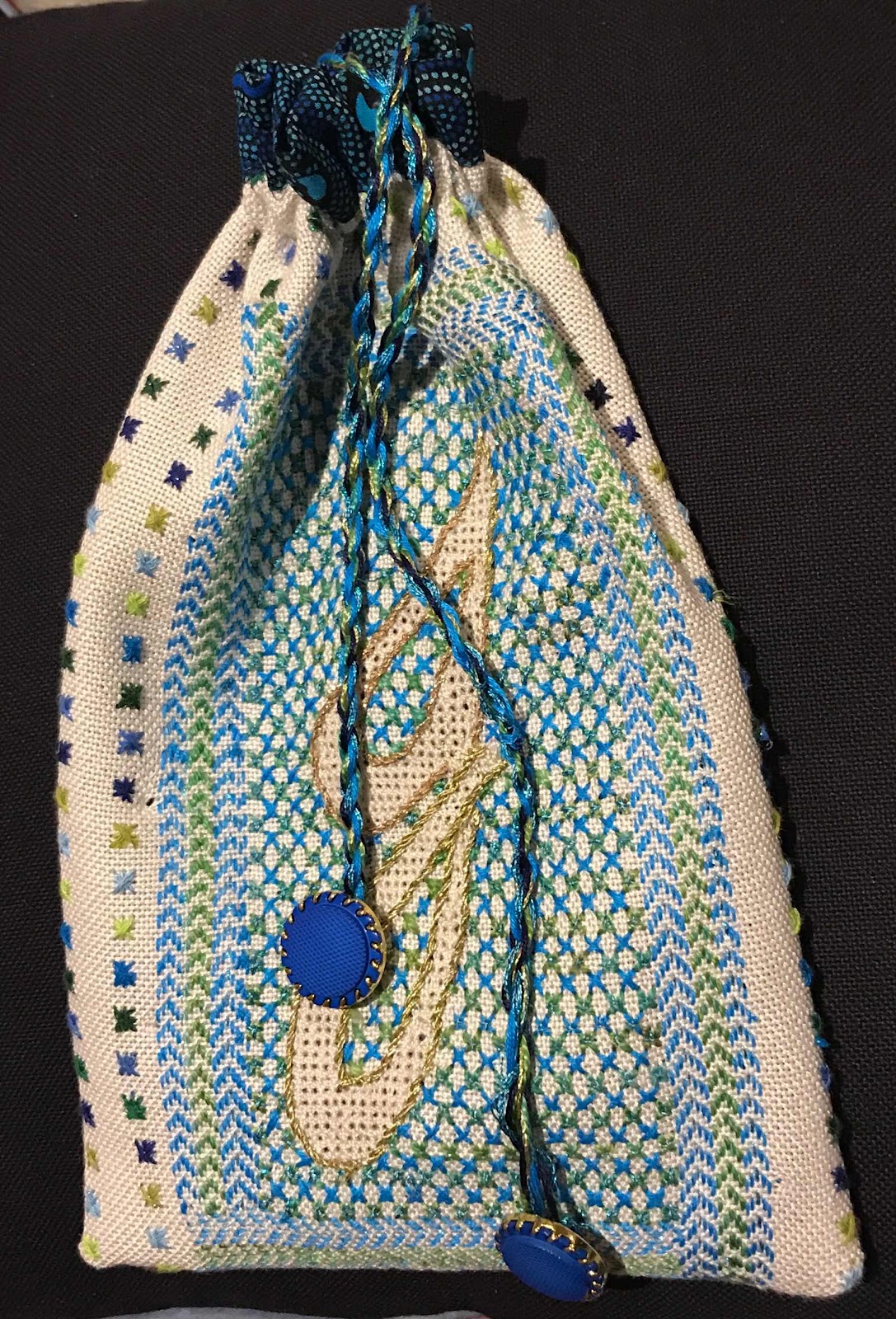 As a final touch I added cord endings  from my button stash.

I'm not sure yet, what I will keep in this bag - but I'm very pleased with it and I'm sure something will turn up!


It is such a privilege to take part in these workshops. Thanks to all who made it possible. 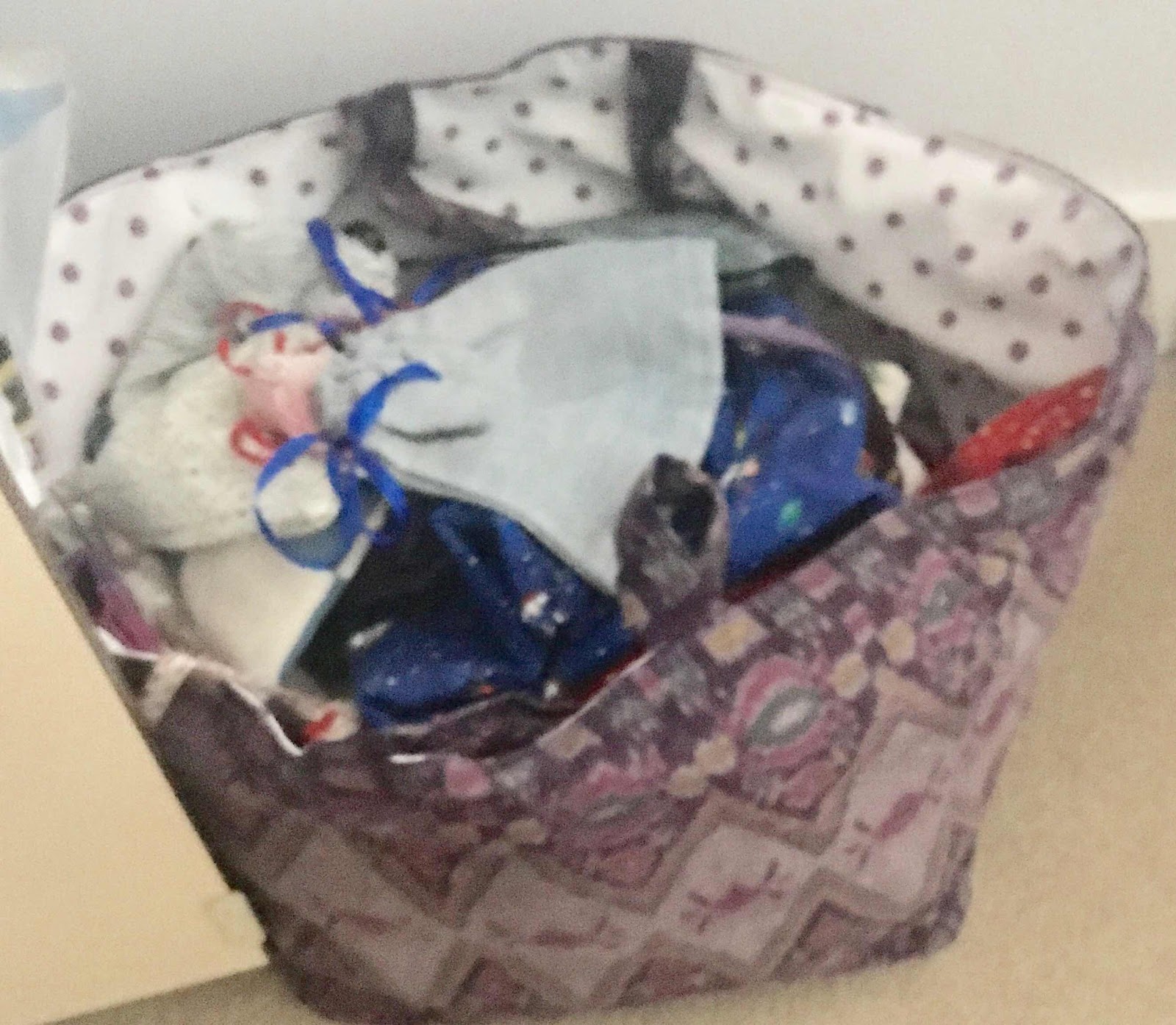 Christmas made a serious dint in my supply of the large drawstring bags I use in place of wrapping paper. I still had a good supply of small bags but decided I needed to make more medium and large bags. My whole family uses and recycles these bags so I like to keep the supply going - and the making of them is, for me, enjoyable, even therapeutic. 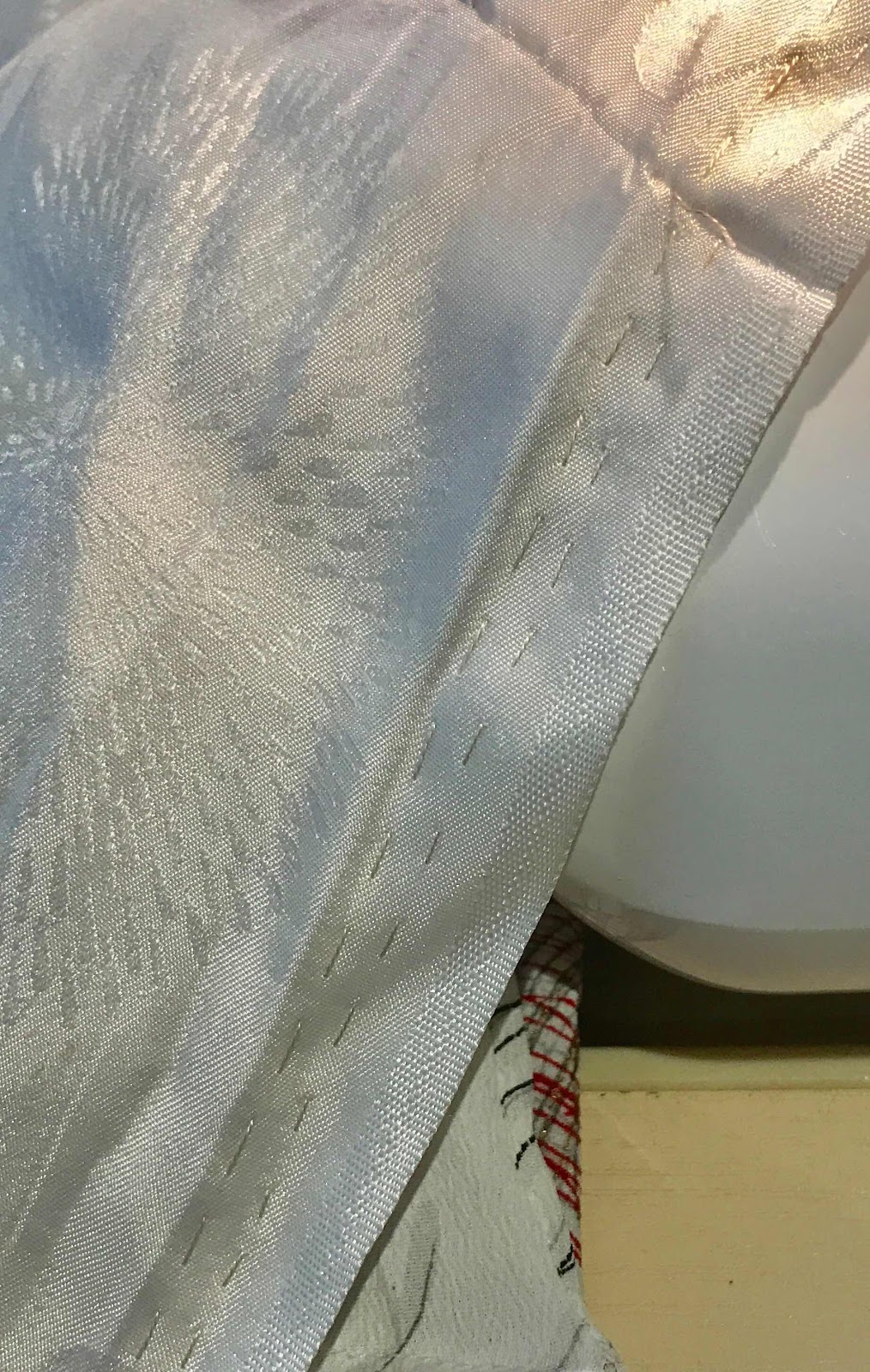 In the past I have purchased vintage sari and kimono pieces for these bags. This time I unpicked a kimono jacket given to me by my daughter. It took a bit of unpicking as it turned out to be made from a huge length of obi-width fabric, folded and tacked ingeniously - as kimonos usually are. Regretably, I didn't take photos of the unpicking and ingenious folds. 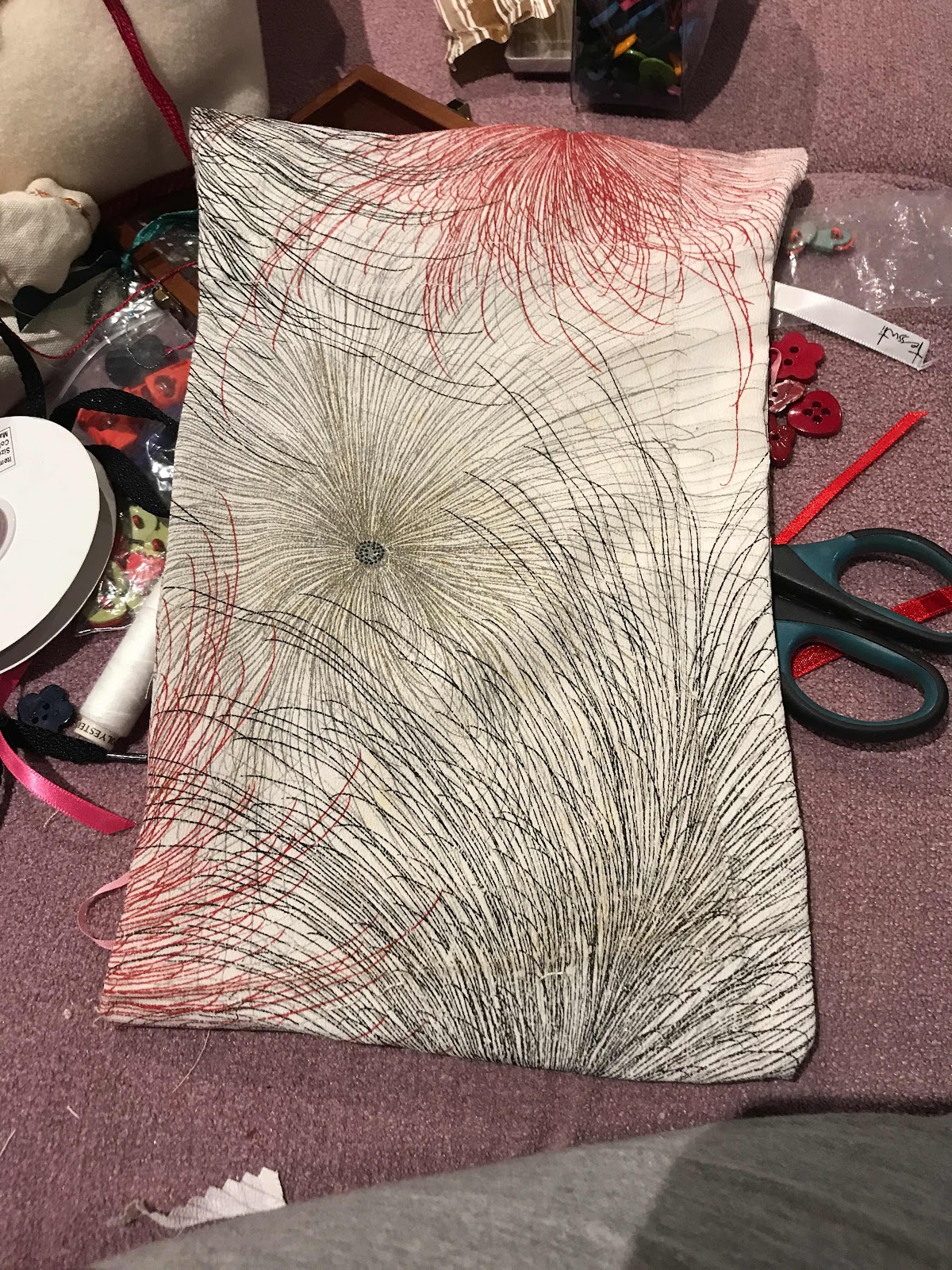 It made 23 bags of very varied size, from very small to fairly large. I like to let the fabric dictate the shape and size. Flaws and holes get incorporated. I kept as much of the original hand-stitching as I could. Much of it was stitched using two rows of running stitch. 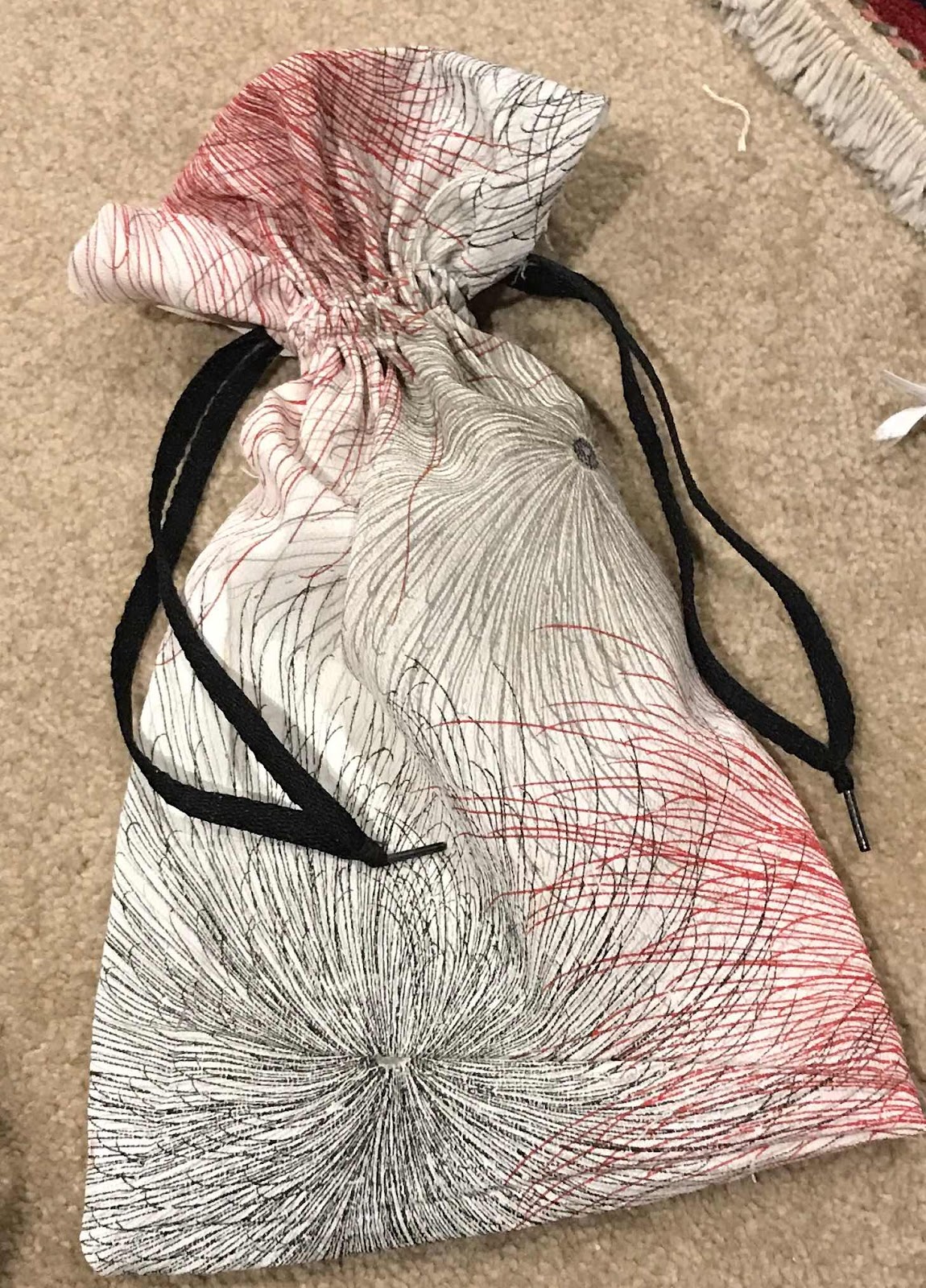 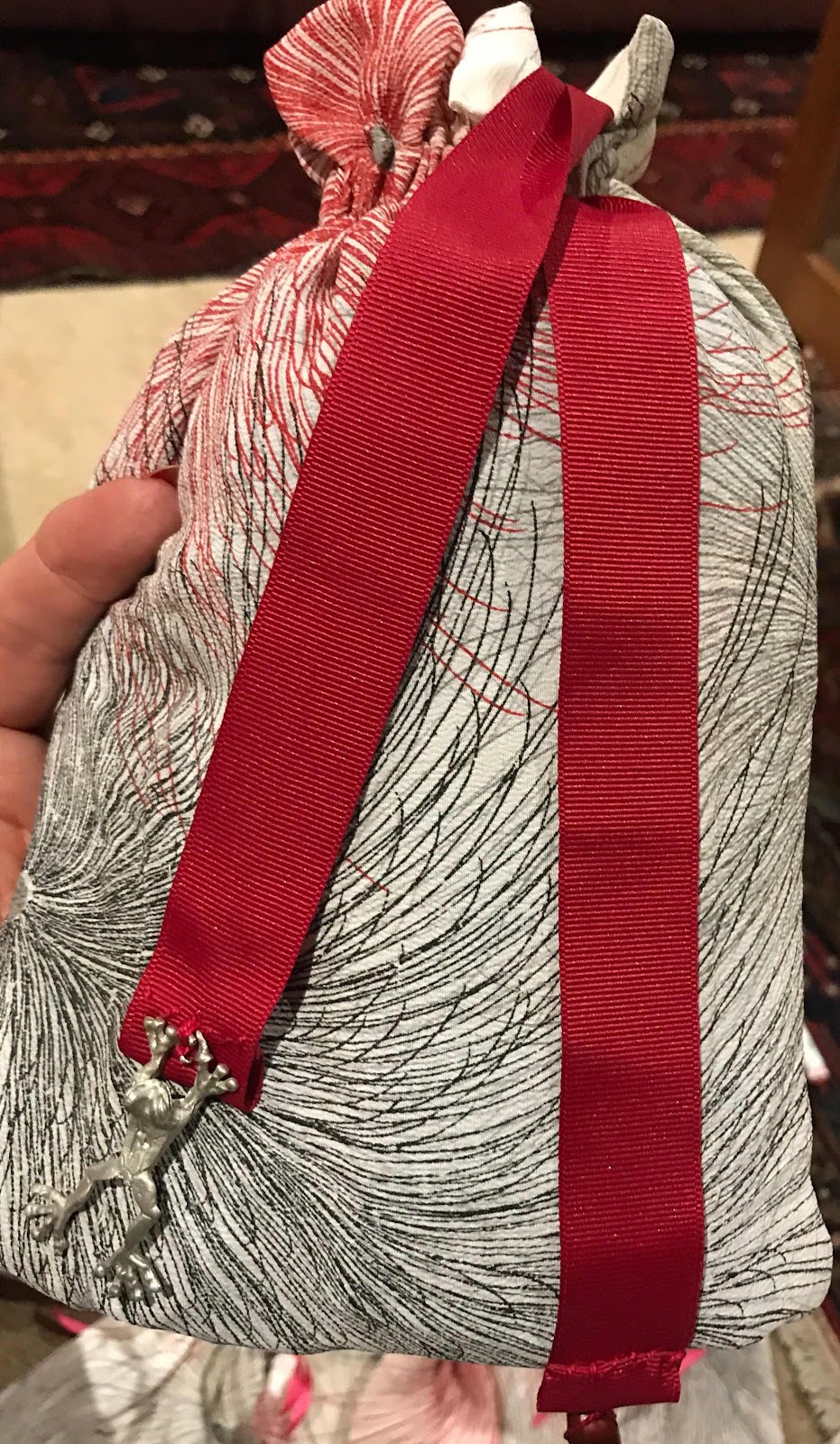 After stitching the bags, I spent a relaxing evening finding matching ribbon or drawstrings of various cords, such as shoelaces.  A further hour or so was spent finding stoppers for the cords, using the remains of old earrings, buttons or, in some cases, knots. 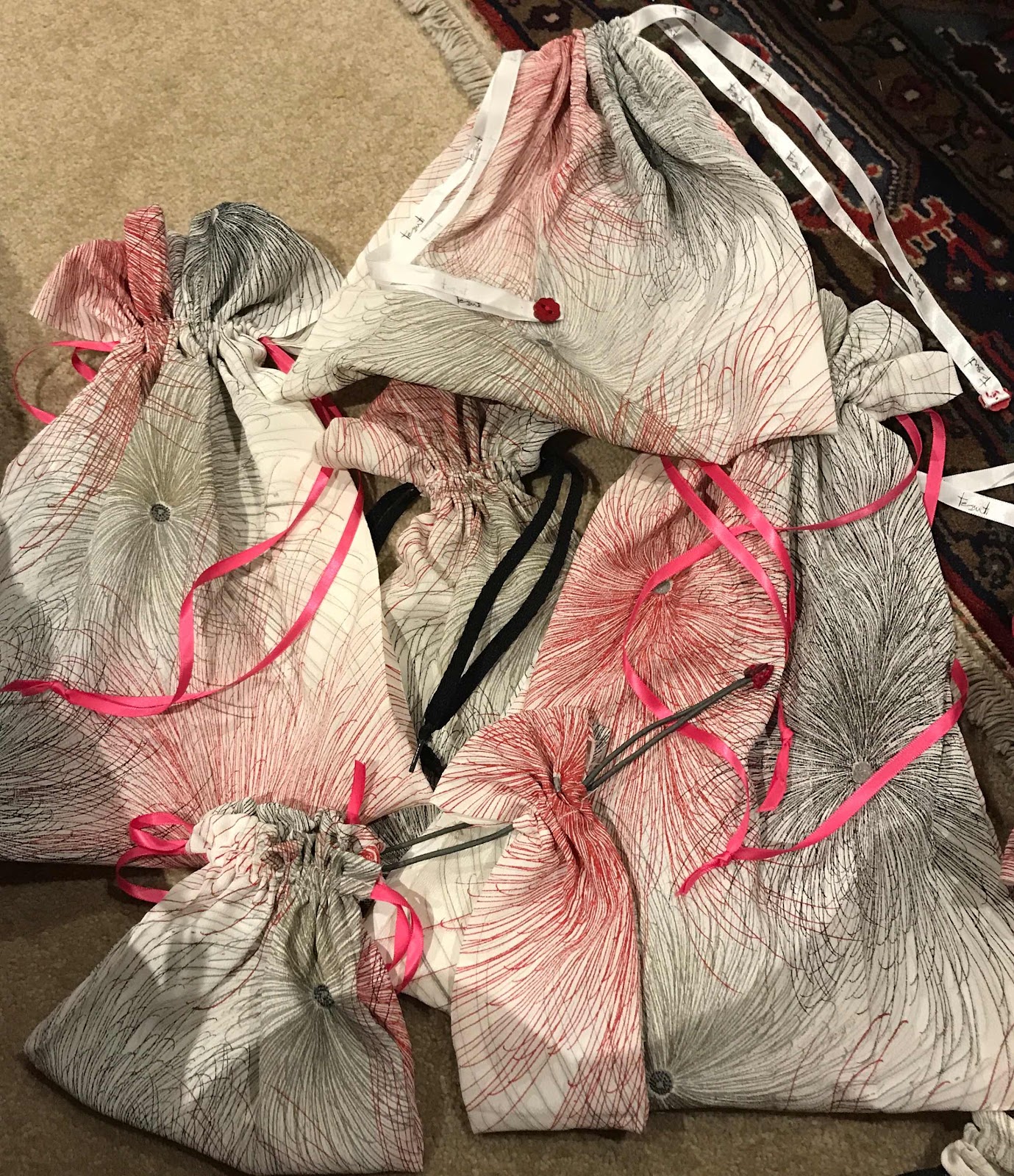 I could have done with some more red ribbon, but made do with the strong pink I had at hand. 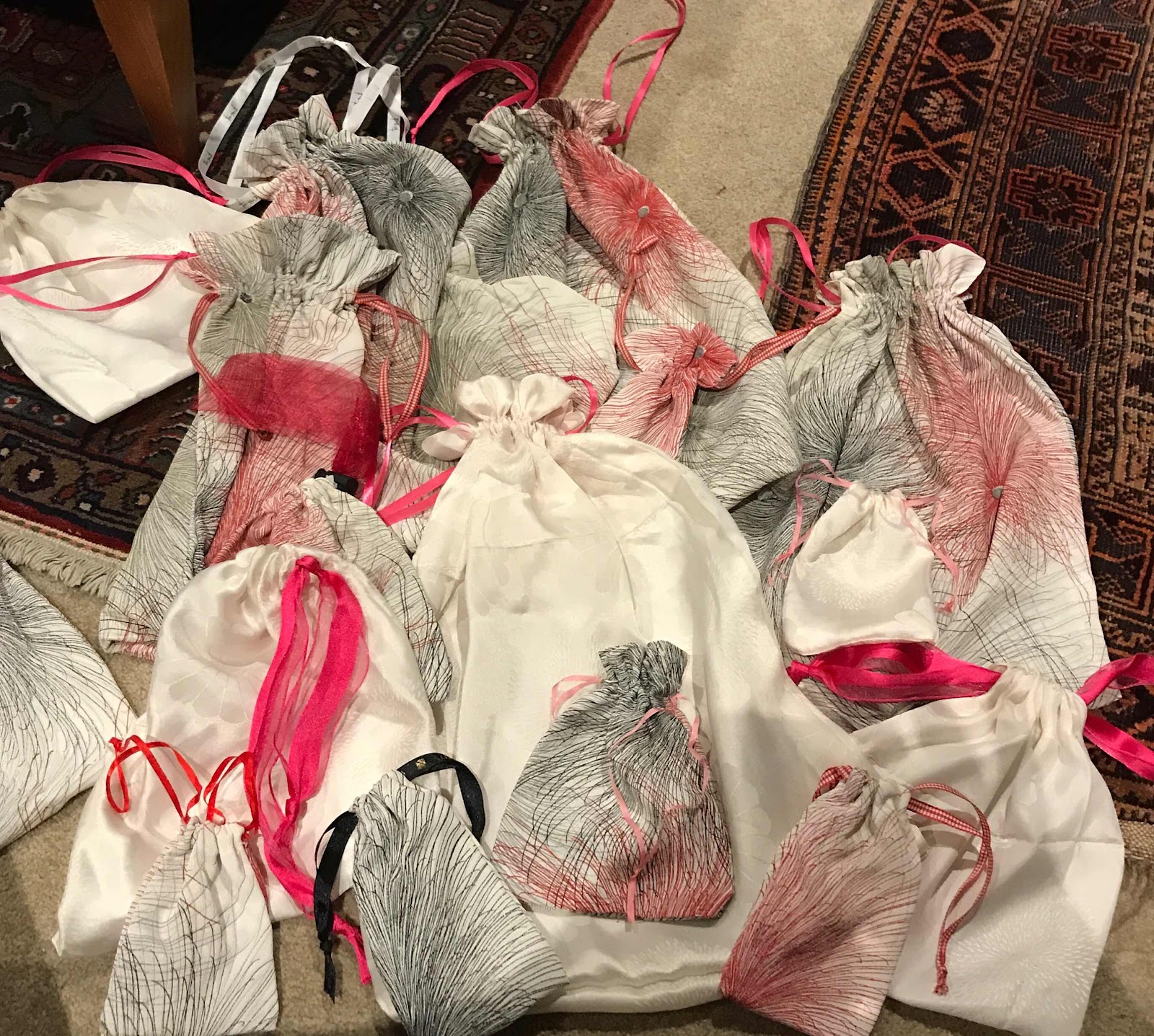 A very satisfactory result for a few hours work.

Posted by Jillian at 12:11 PM 2 comments: Links to this post 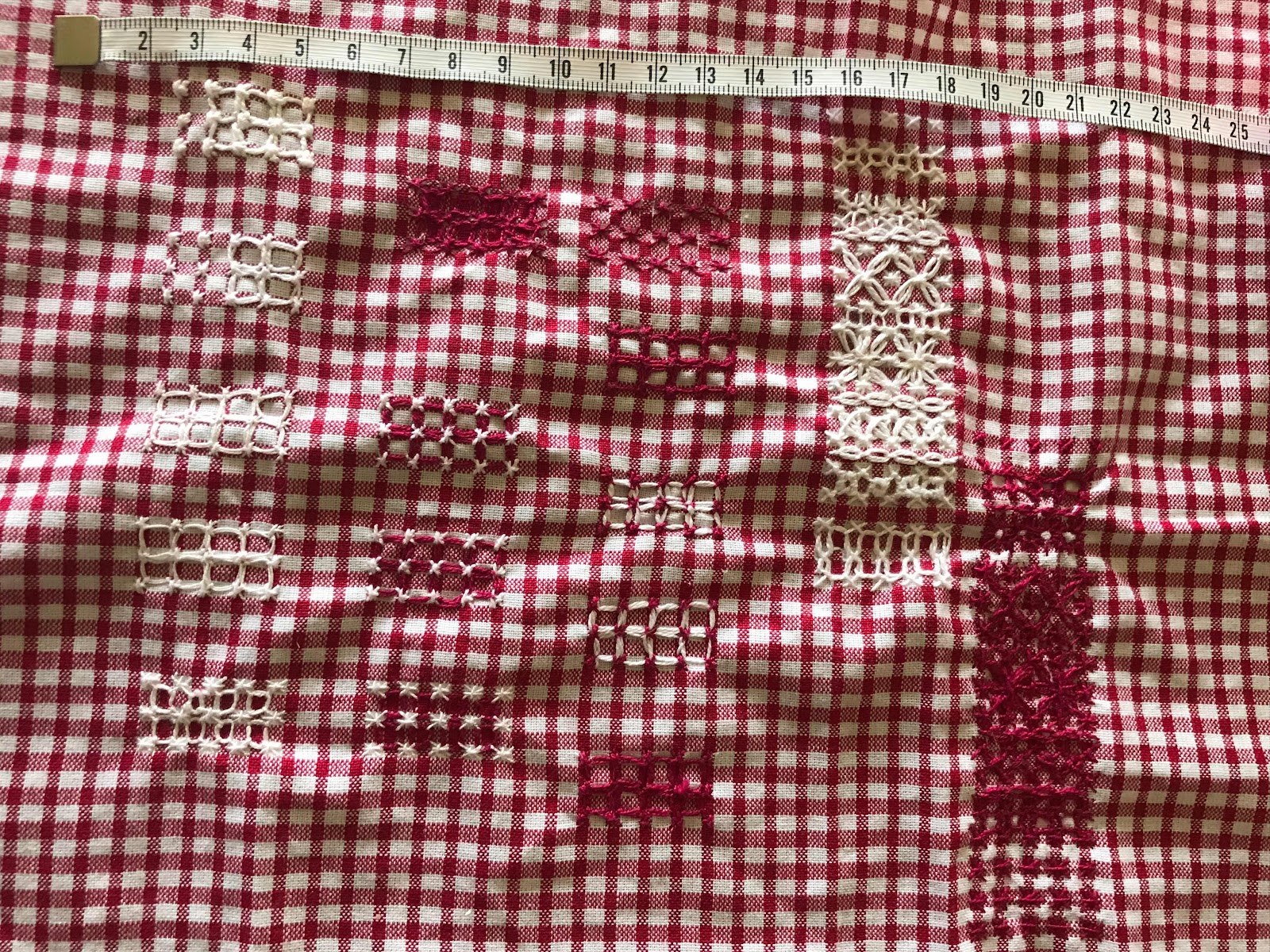 A year or so ago I did a workshop at the Embroiderers' Guild on Chicken Scratch, or Depression lace. We worked a little sampler, mine on a piece of small squared gingham that I happened to have left over from something.

I really loved the result. It was fascinating to see the different effects of using the red or the cream thread, and  from stitching on either the red or cream squares.

Others at the workshop had some striking fabrics they had bought from Trish's fabric shop in Adelaide. I visited after the class and bought three pieces with the intention of making aprons.

I also went hunting for patterns for cover-all aprons in the Japanese style. In the end I bought two aprons online to use as templates - cheaper and easier than patterns! 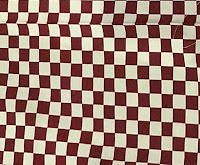 The time has never been quite right, but this Christmas, when I bought my eldest granddaughter a recipe book for Christmas, I thought it would be good to make an apron to go with it. I chose this piece pf fabric - a bold check rather than a gingham. 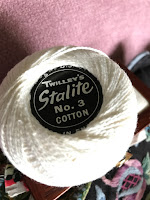 Because the squares were about half an inch, I needed quite a heavy thread to get coverage, and settled on this crochet cotton. It needed quite a large needle, but worked well.

I had bought a metre of the 140cm wide fabric. The length gave me the drop, less a strip for the cross-over straps,  and the width enabled me to cut the wrap-around apron without side seams. Using the pieces I cut out from the arm holes for pockets, I just had enough to patch together some bias strips to edge the curves. 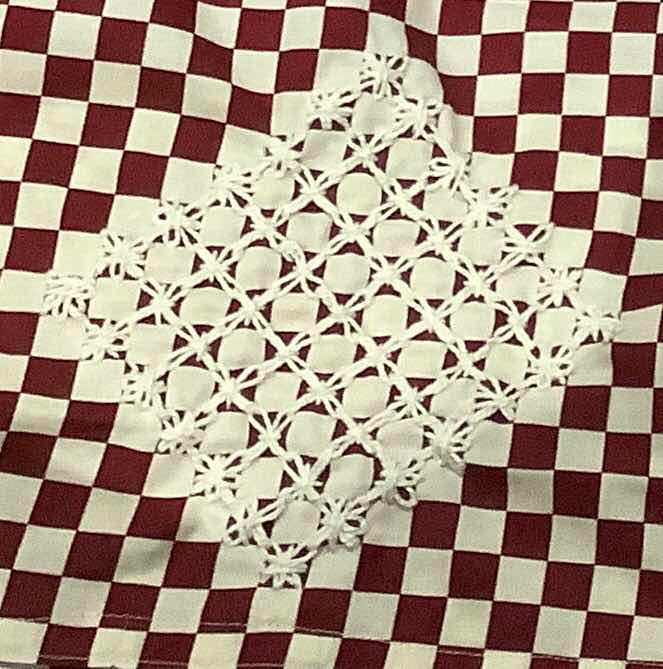 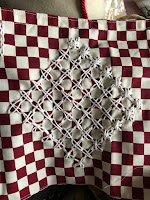 I began the embroidery with the pockets, using detached chain crosses and edging it with double crosses. 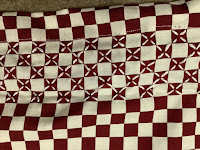 Along the bottom I worked simple crosses on the red with cream thread. I really love playing with the different effects. 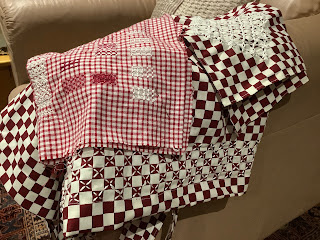 I kept referring back to my sampler.

The yolk presented the greatest challenge. I had a couple of adaptations before I was happy. It needed quite dense fill to achieve the lacy look.
I didn't have a model to photograph the finished piece, but I was delighted with it. It is sturdy, but looks quite delicate. 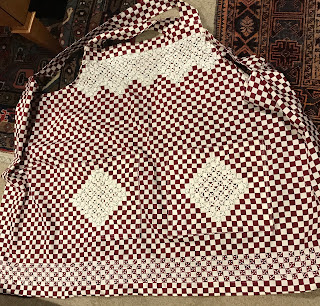 It made a good present to accompany the recipe book.

Having taken the plunge I made up the other two pieces I bought after the workshop. That's, however, for another post or two! 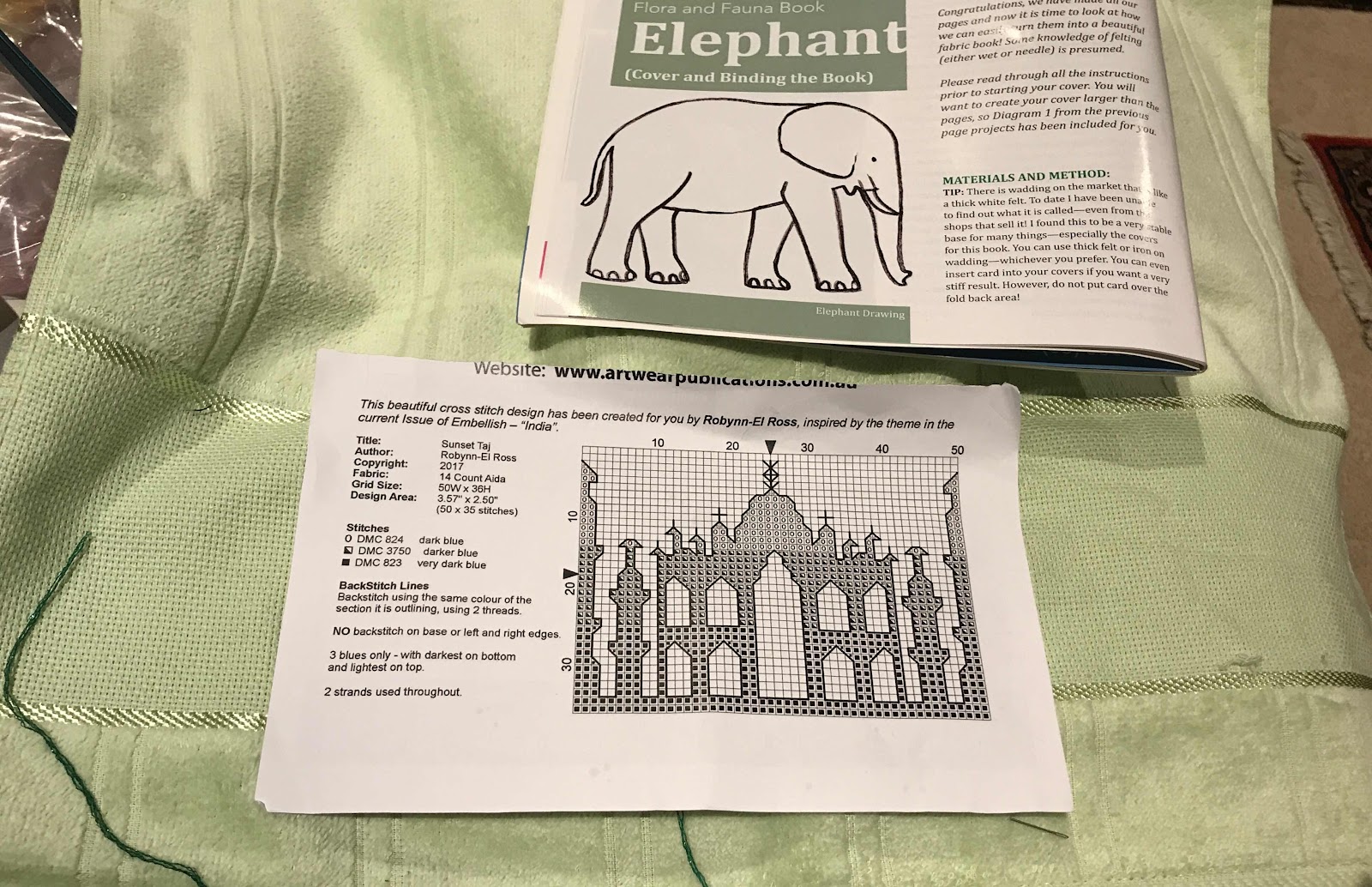 I like to make Christmas presents for friends. The trick is to make something they want, not simply something I like to make. One friend, who likes hand-made gifts, grew up in India. She has recently moved to a new home in Adelaide, so I thought I would embroider her a hand-towel, with Indian motifs.

A bit to my own surprise, I found a cross-stitch design of 'Sunset Taj" that I had kept from a magazine, so began with that. 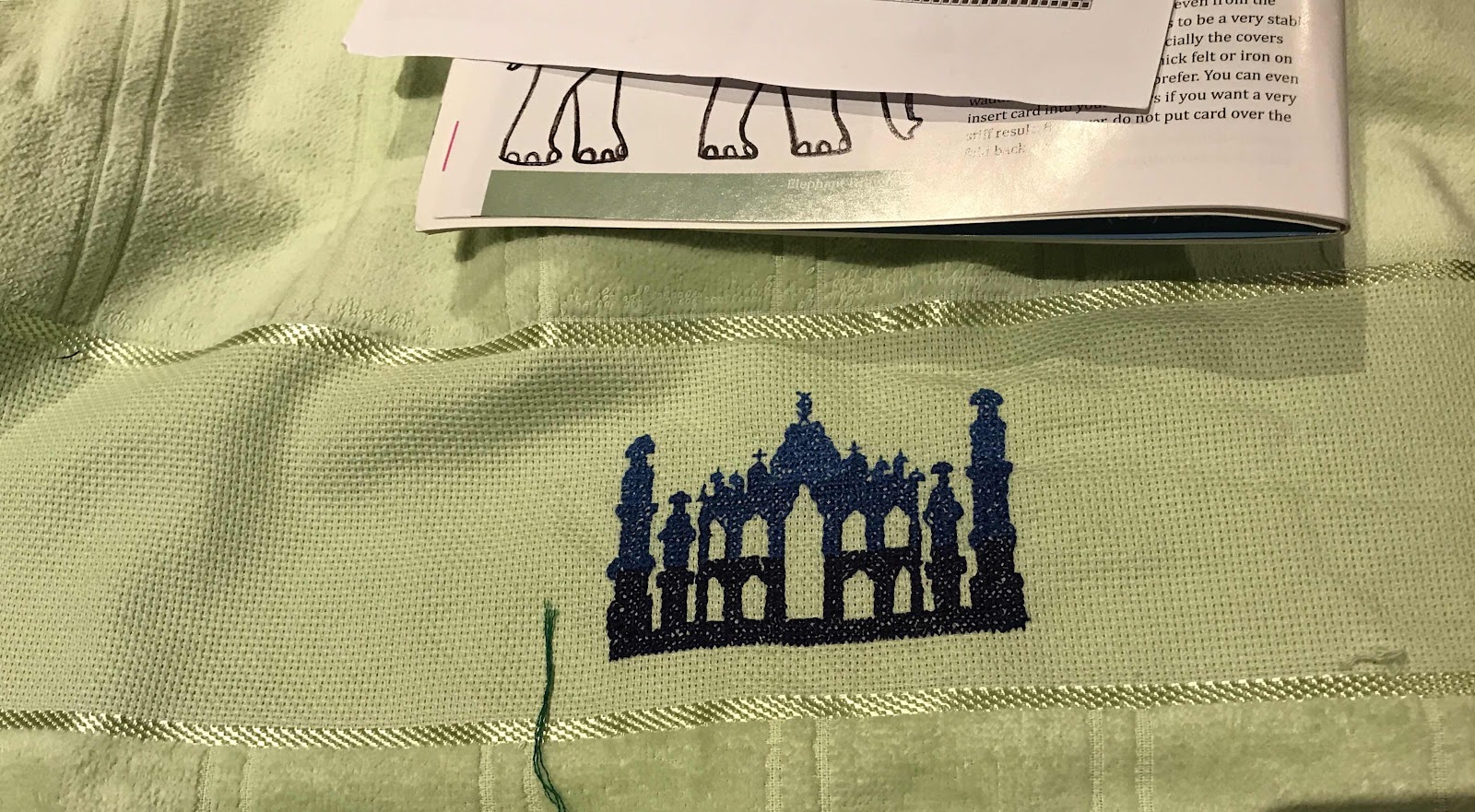 'Sunset' meant in three shades of blue, making it far more like night than sunset. However, I stuck with the blue but definitely night, It worked well, but looked too small on its own on the towel. I tried other Indian motifs, like elephants, but the scale was badly wrong.

After looking at dozens of photos of the Taj Mahal, I decided to embroider a version of the trees that line the approach to the Taj.

The trees are very dark green, and highly sculpted, although not uniform. 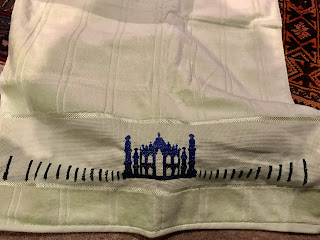 To this I added (but, alas, did not photograph) a crescent moon. As I finished it, I decided it was a mad idea. Who, after all, ever sees the Taj by moonlight?

My friend was delighted. One of her earliest memories, she told me, is of being taken, as a child of 7 years, through a gate, to see the Taj Mahal by moonlight - an image she has kept all her life!  Blew my mind!
Posted by Jillian at 10:39 AM 2 comments: Links to this post