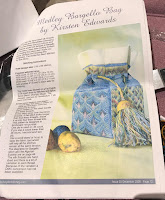 I thought this might make another bag for storing pearls. 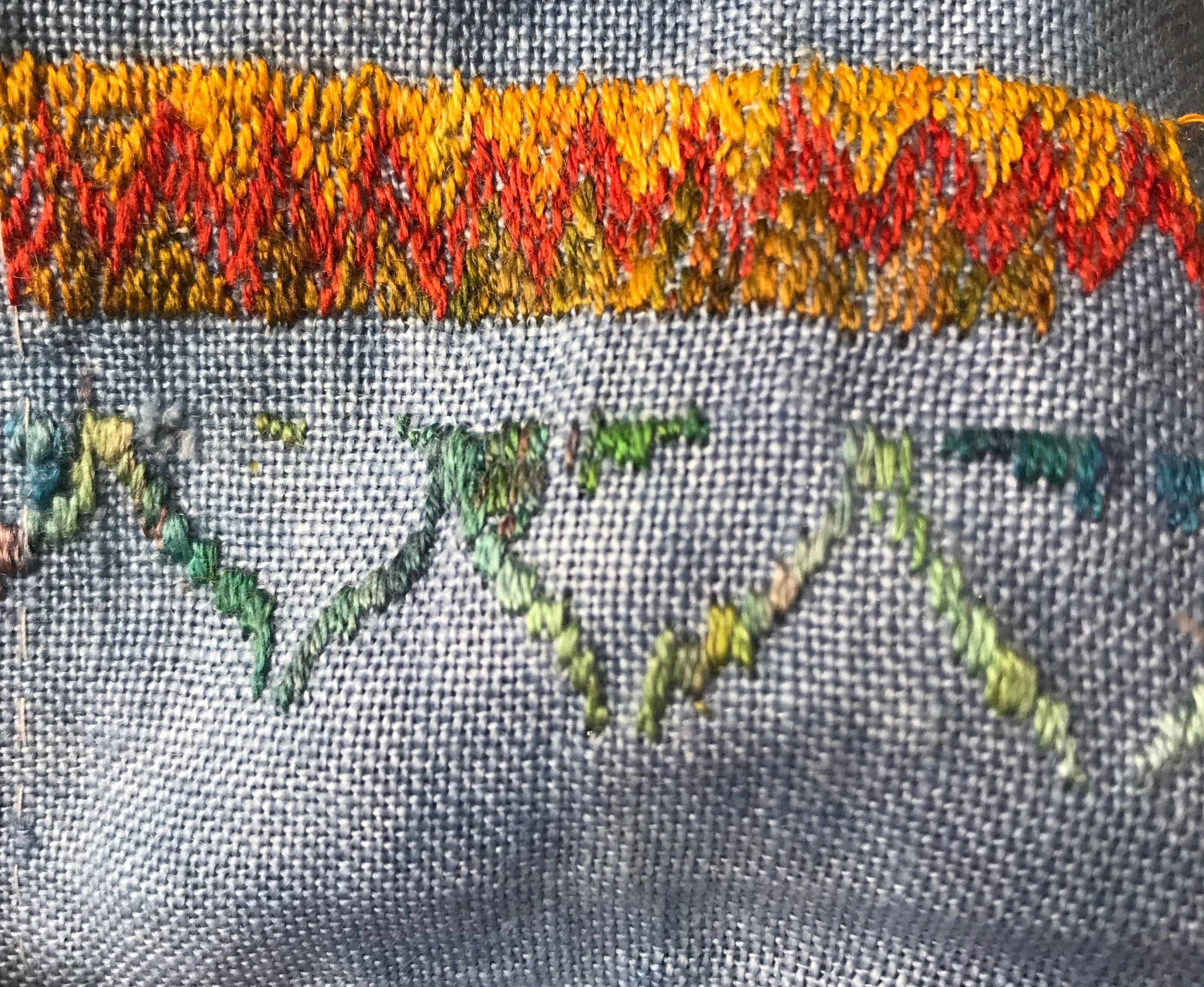 I had been entranced by this bargello pattern and began to stitch it in 2010, but didn't get far. I started to drift off pattern and found, even then, 36 threads per inch difficult to see. 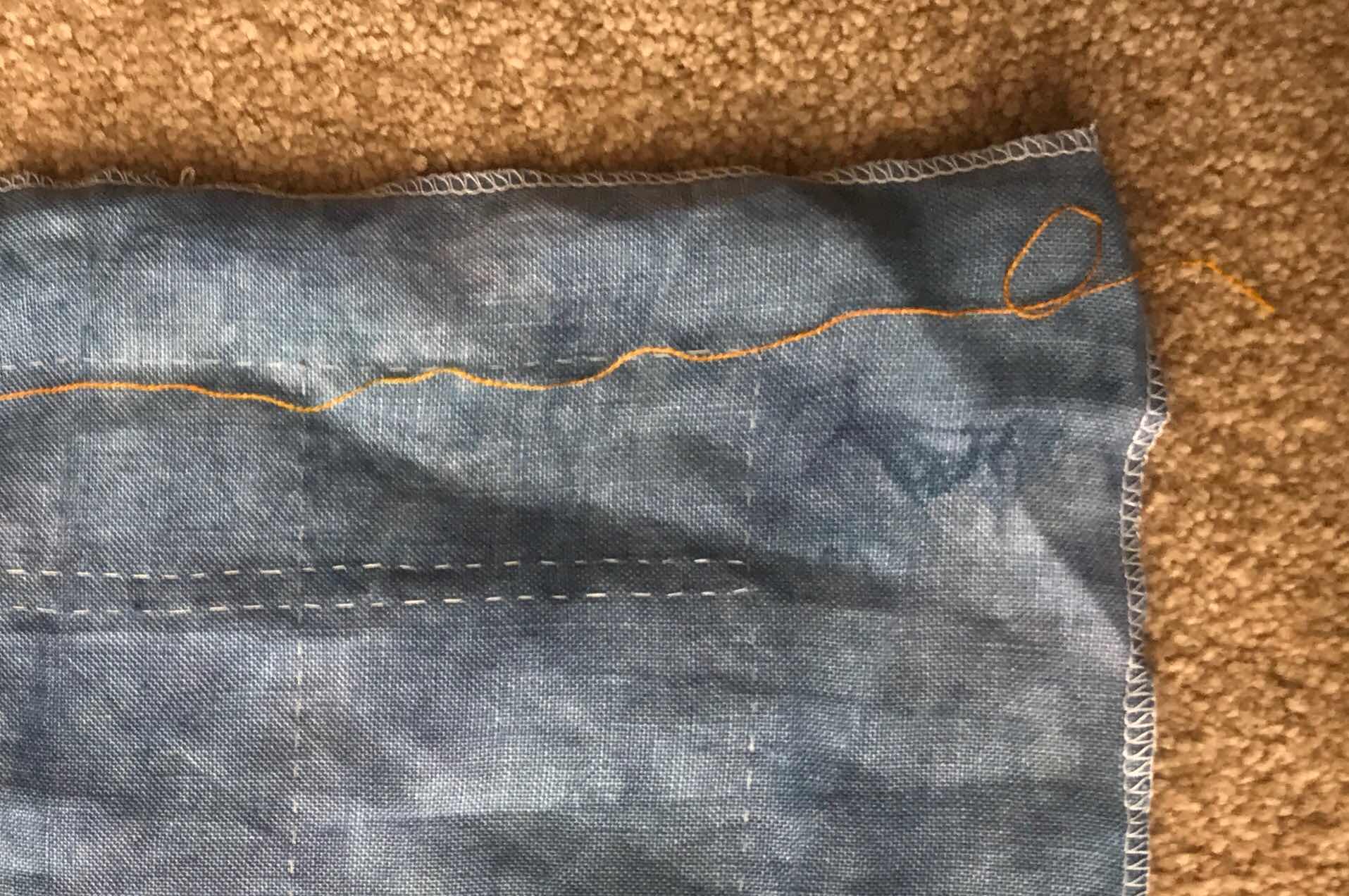 In the intervening 8 years, I have learnt enough to know the necessity of marking up the fabric with tacking thread around the design framework, so I put on my magnifying glass and outlined the design areas with four thread tacking.

At this point I took the piece to the Embroiderers' Guild and talked to a tutor about the best way to tension it. The tutor asked me why I was putting myself through the stress of a counted thread work on such fine, dark coloured linen. "Play to your strength!" she said, "I couldn't see to count that - work it in surface stitchery!". 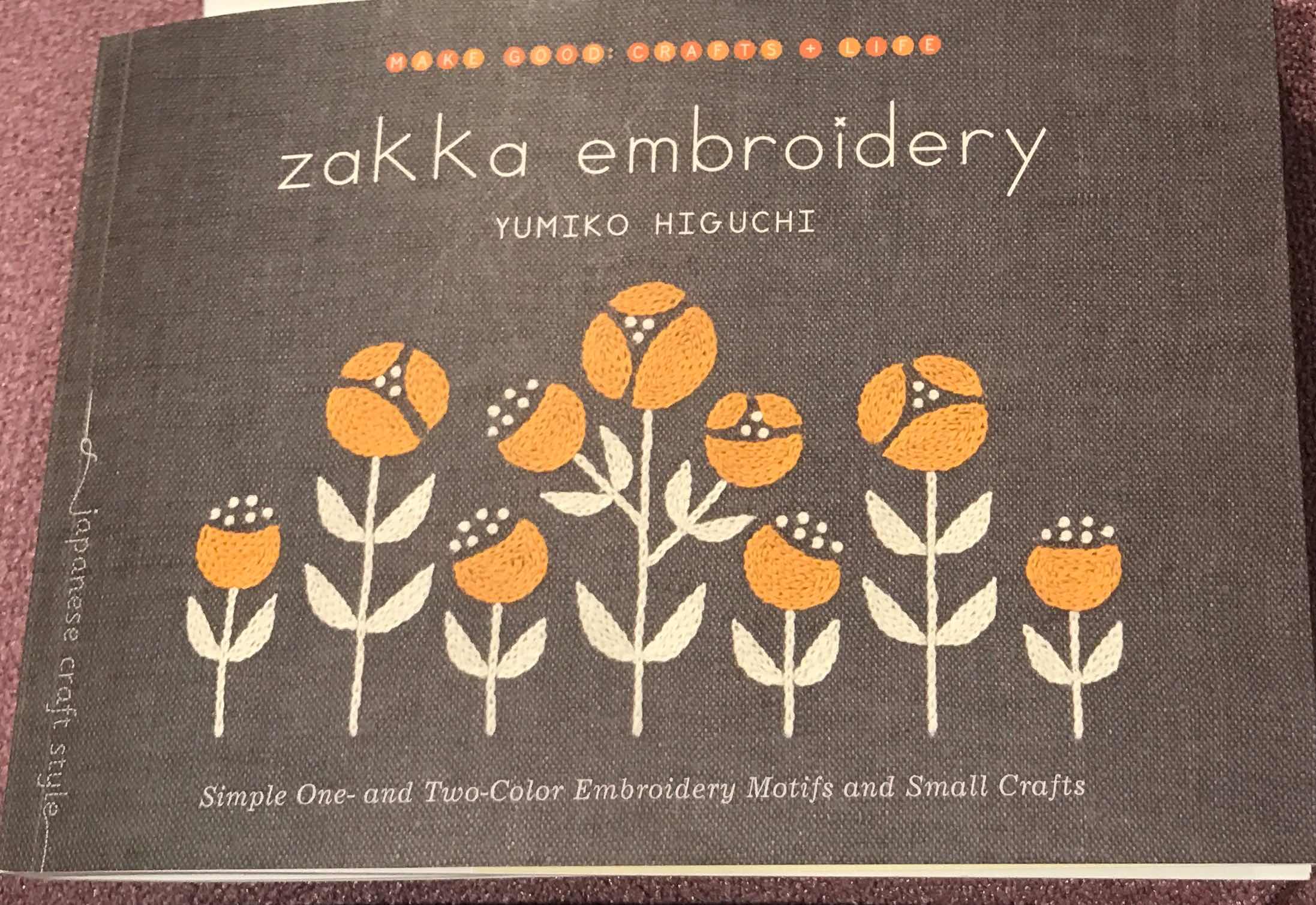 It had never occurred to me to change the design. I can't believe I had been so fixed in my thinking. I suddenly had permission to move away from counted-thread work. I  went straight home to my new book - a Japanese take on Scandinavian designs.

Using the framework outlined by my tacking, I  embroidered a line of birds along the top panel. 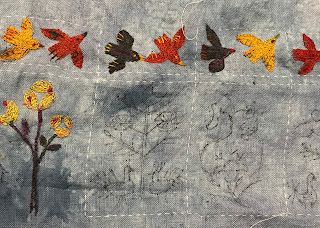 In the lower panels I added a series of motifs from Zakka. 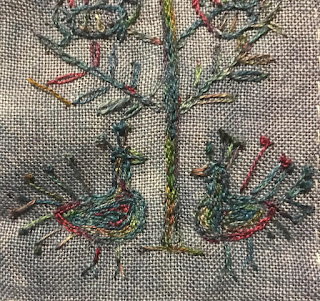 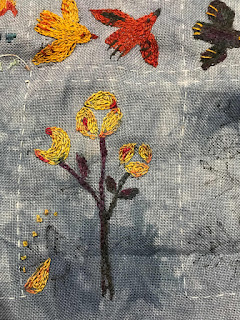 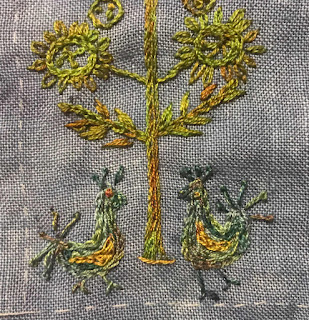 Zakka uses either one or two colours of thread. I stayed with this protocol, but given the silk threads in the pack are variegated, it was a bit of a cheat. 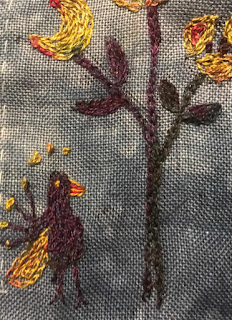 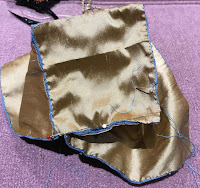 I used the gold silk supplied as lining, backing the linen and constructing the bag as one piece. 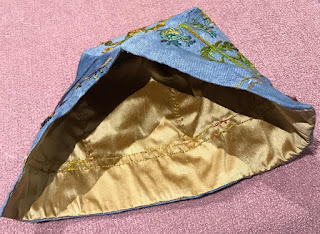 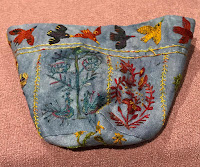 I stitched a cord channel through the  two layers and an edge between each side of the bag. 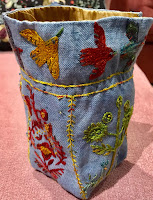 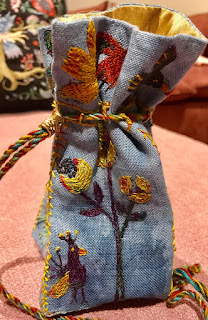 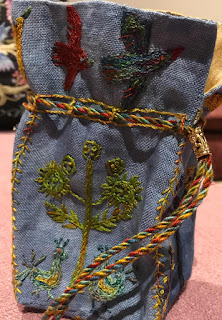 I made a twisted cord to thread through the channel, but once made it deserved to be outside, so I added loops.

I've decided to use this to store my turquoise jewellery.


It isn't the bargello bag - but has its own charm.  It's completion is another testimony to the benefit of belonging to a Guild! 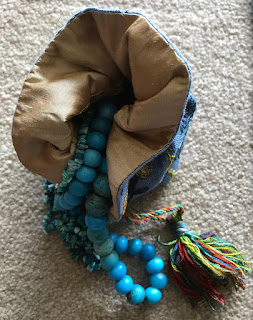 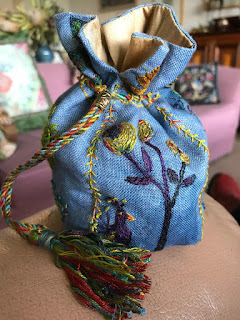 The second shawl in my 2018 shawl binge was a feather and fan triangle from a ball of lovely variegated 2 ply I bought a few years ago in New York from a place called Knitty City in the Upper West Side. I saw a shawl in the window one evening and went back when the shop was open to buy the pattern and yarn. I made the shawl for a neighbour but had bought a spare ball. I wanted my neighbour's shawl to be unique, so I've repeated the pattern with different yarn. The spare ball has been waiting for me to find a new pattern for it. 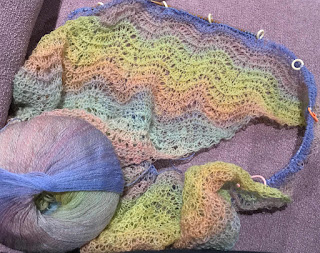 I settled on a feather and fan which worked well. I simply kept knitting until the yarn was used up.

Then I blocked the shawl on the largest towel I could find - my stripy beach towel. 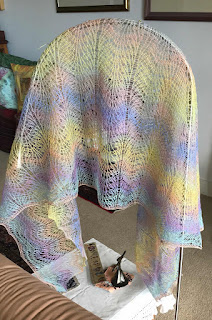 It blocked beautifully - and yes, passes the wedding ring test!


One of my granddaughters says it is a veil for a Gay wedding!

I haven't yet found the recipient for it - but I know that will become clear  - the secret name of the rightful owner will be revealed one day!

Posted by Jillian at 7:58 PM No comments: Links to this post

Part of my reason for doing the Hems and Edges counted thread class last year was that I am now on Project 5 at the Guild's Basics to Beyond group. This is the last project in the standard program - a counted thread sampler. 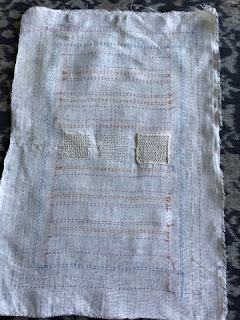 Predictably, the first step in the project is to tack all the boundaries of the work in colour-coded machine thread - three threads under, three over. These provide the boundaries for the various panels required to complete the project for assessment.  It took me a couple of weeks of whenever-I-could stitching to complete this task - and a bit of unpicking. You know, of course, if you have it wrong, as your edges and intersections do not work out.

There are three squares in the centre of the piece. These are to be worked in our own choice of three different pulled thread patterns or stitches. I chose mine from Danish Pulled Thread Embroidery a book I liked so much I sourced and bought my own copy.

These are far from perfect, but I don't plan to undo them. The diagonal line on the one on the left show where I started - then repeated a line when I picked up the other half. 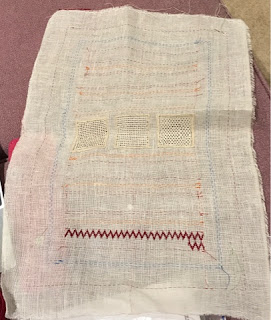 I  worked my first free-choice panel with a bargello stitch over 4 threads, with an off-set of two threads. I started with a stitch over 3 threads, but soon learned that working over three threads meant off-setting by 1 thread only, creating a very tight pattern and considerably more work.  The 4 thread version looks bolder and neater.

As my second counted thread panel, I chose a design from Japanese Kogin.

My third is Swedish Sollerosom. 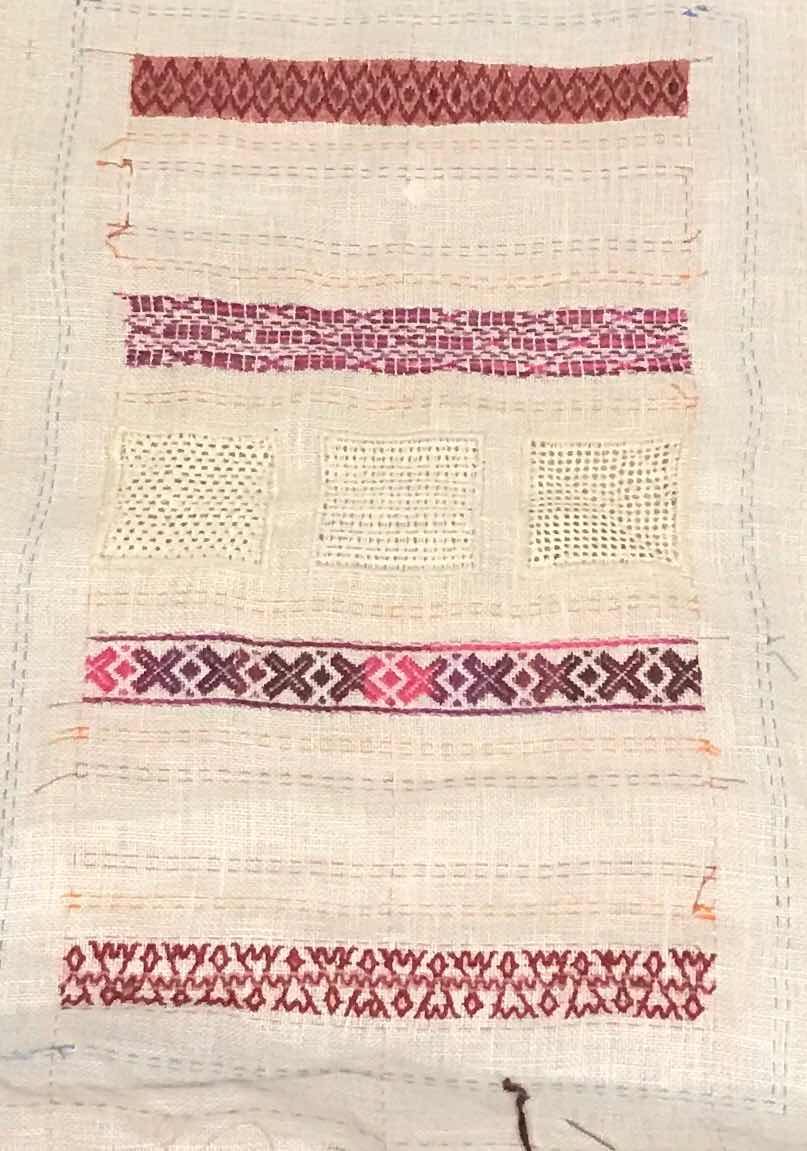 For my final counted thread panel I tried a pattern from Yvette Stanton's latest book, Smoyg: Pattern Darning from Norway. It is a simple motif - chosen because, at 21 threads wide, it fits my panel!

This post is a summary of many months work. I have averaged one panel each month on this project. There is no hurry - no pressure to do anything other than learn. It's a lot of fun researching and choosing the stitches.

Now I have to do the drawn thread panels and the numerous edging sections. This needs to wait until I get some help later this month!

Posted by Jillian at 11:19 AM No comments: Links to this post