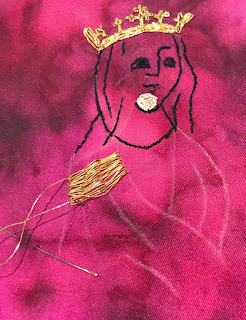 This is where I left Mary at the end of the Opus Anglicanum class in January.  Since then I have managed to work my way through a piece of canvas work, preparatory to the March Retreat in the English Lakes District, finish the Australian Bush piece . and the acorn and horse from Opus Anglicanum.

So now for Mary. It seems appropriate to be posting this from Windermere, on my embroidery retreat. Details of how that is going can be found on my travel blog. 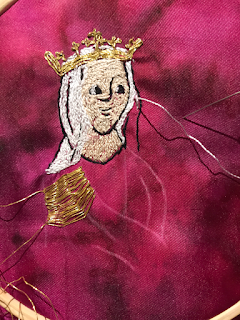 Regretfully, I did not take photos of the face in progress. It looked more like a skull for much of the time. My granddaughters had many questions about the veil - why did she have white hair? why would Mary wear a veil? why would you wear a veil under a crown? 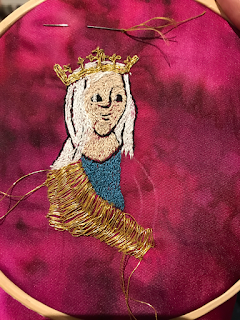 I have surprised myself by thoroughly enjoying working with one strand of silk. That, however, came to an end and there was no way out of completing the goldwork!

I'm very pleased that I had finished the crown at home during the course. This meant I only had the cloak/shawl to finish. It took a few hours and I tried hard to improve the stitch as I went along. 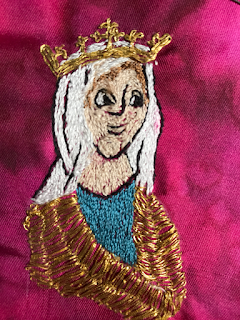 In deference to my granddaughters, I also added rather more hair than the original had - in order to make it clear that the white bit was a veil. 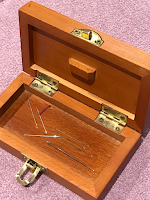 Again, I had been giving thought to how I might use this piece. I still had one box with a magnetic base for storing needles and the embroidery space on the lid was perfect.


So here she is, guarding (blessing?) the needles. She will make a nice gift for someone.

Thanks again to Alison Cole and my fellow students! 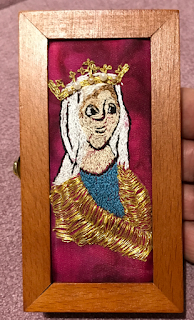 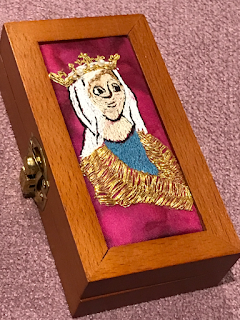 Posted by Jillian at 8:35 AM No comments: Links to this post


I am posting this from Adelaide Airport, about to undertake the first leg of my journey to London, from where I will  once again travel to Windermere, in the English Lakes District, to attend another of the Lady Ann's Needlework Spring Retreats organised by Phillipa Turnbull. When I attended last year's Retreat I had no intention of travelling to England again this year. It was, however, such a great experience and such a great group of people, that I, and most of my fellow students, decided to return in 2018.

When I returned home in mid-January from a beach holiday, there was a parcel waiting for me. It was canvas, wool and a pattern for Dorothy Wordsworth's Postbag, which we had viewed at the Wordsworth Museum in March 2017. Phillipa was inviting us to make something based on the bag in advance of the Retreat. She had also organised for the results to be displayed at the Museum towards the end of our Retreat.

I was mildly panicked.The next day I was to begin the first of my two Summer Week classes at the Embroiderers' Guild and I had an unfinished project from my beach holiday.  As a fanatical finisher, I was even more panicked at the end of my Summer School Classes.

Even though I have published blog posts on the Summer Week Classes, I prioritised Dorothy Wordsworth's bag over finishing those projects. I have been working on this in the background and only returned to Opus Anglicanum and Australian Bush once I had finished the work on this bag.

The story, however, has had to wait a bit to be told. 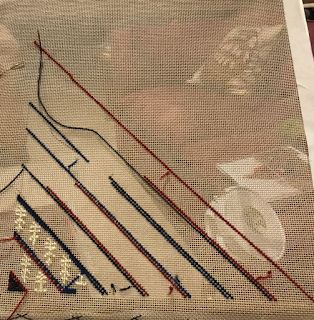 So panicked was I, that I began work immediately, using only the notes that came in the package. I decided, however, to approach it differently to Phillipa's suggestion.

The original bag is roughly A4 size. If I reproduced that size I would need to back the bag with something.  I decided instead to make the piece longer, so I could fold it in half to make a smaller bag embroidered on both sides.


I began by embroidering a set of diagonal lines delineating the different colours in the original. 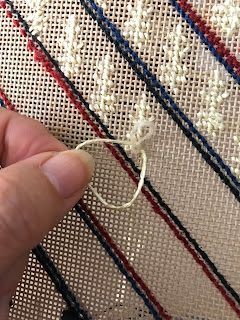 I initially used cross-stitch in a single thread on the diagonals but soon decided that the coverage was a bit thin, and that cross-stitch was going to take me too long. After some experimenting, I settled for tent stitch using a double thread.


Once I had the diagonals in place I began to add the skeletons of the little trees, using a silk thread in my needle along with the two strands of wool.  This was a bit tricky, but I got into a rhythm of pulling the wool into place before pulling the silk into place - not perfect, but allowing the silk to dominate. 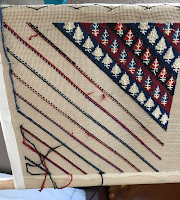 I completed a corner to make sure it was going to work. I  used the dark red and dark blue as my backgrounds, rather than their lighter versions - hoping I had enough thread. 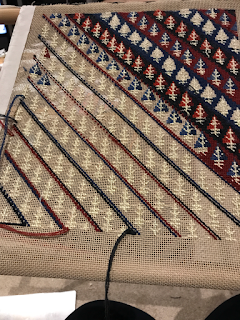 I then went ahead and outlined the whole piece, filling in the tree skeletons.

It was about at this point that I got a link to Phillipa's tutorial . If I had waited, I may well have, as Phillipa suggests, started in the middle and worked out, working the skeletons in wool first, using the silk to form a cross over the wool stitch! 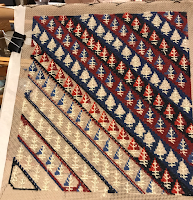 As it was I was too far in where Angels fear to tread! 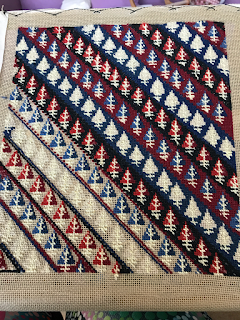 By now my panic had subsided and I was having fun. I had forgotten how addictive canvas work can be. This is especially so when the pattern repeats itself as it does here. I love being able to work from an outline without referring to a pattern. 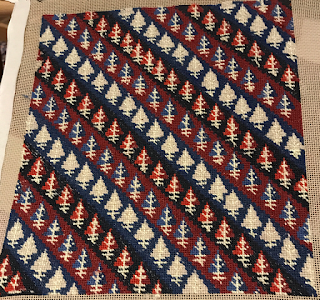 While I am telling this story in a single blog post, it took me about three weeks of not doing much else to finish the embroidery. I'm very grateful to my family and friends at the Embroiderers' Guild who encourage me and dampened the panic! 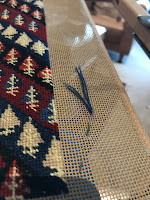 The thread in the needle in the canvas is all I had left of the dark blue! 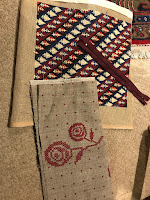 My stash yielded several options for lining fabric, but this printed linen seemed the natural choice. 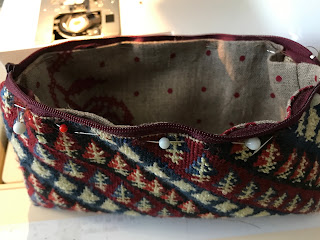 A maroon zip, side seams and a neat, useful bag emerged. 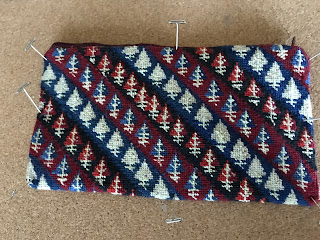 The finished bag was slightly twisted, so I blocked it. It took a while to dry. 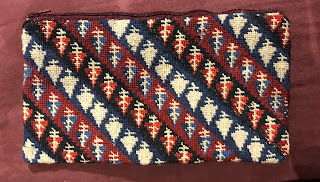 The bag has, of course, one side where the trees face the zip and one facing the other way. That's fine by me. There are inconsistencies and imperfections in my stitching. That's also OK by me. I'm not after perfection - but serviceability, harmony & tribute to Dorothy Wordsworth. 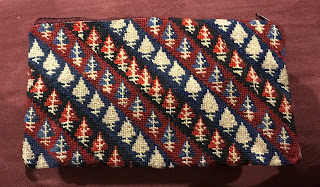 I really like the result. It will be useful and I'm happy to share it with my fellow students and the Wordsworth Museum. It is safely packed in my suitcase which is now booked all the way to London.


I will continue to post to this blog while I'm away but most of my travel adventures, for anyone interested, will be found at https://jillianengland2018.blogspot.com.au/. The first post should be there within 7 hours of this post.


Posted by Jillian at 3:36 PM No comments: Links to this post 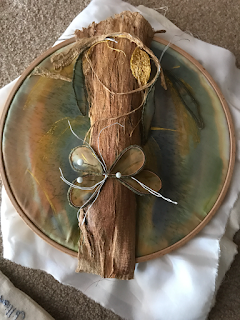 This is where I left the Australian Bush project at the end of the class in Summer Week at the Embroiderers' Guild. I had added one gold leaf in Alison's double sided brick stitch.

I decided against adding more leaves worked the same way. It's a great technique, and I can see myself using it again, but I did not want to invest the time at the moment on this project. 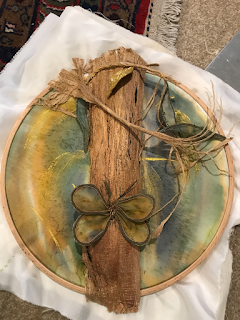 I used a bit of the left-over dyed silk to make a couple more gum leaves. 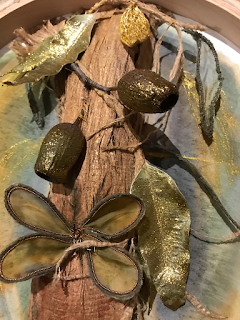 I then visited the very peaceful spot where Jim's ashes are buried under a flowering gum and collected a few of the leaves and a couple of the gum nuts. I came home and painted them with gold glitter paint and attached them to the piece. Jim always liked to be included in my embroidery projects! 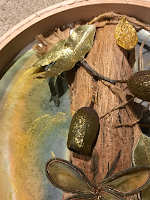 I was reluctant to put this behind glass and hang on my wall. I am not keen on hanging much embroidery, especially behind glass. I hit on the idea of hanging it in a hoop. 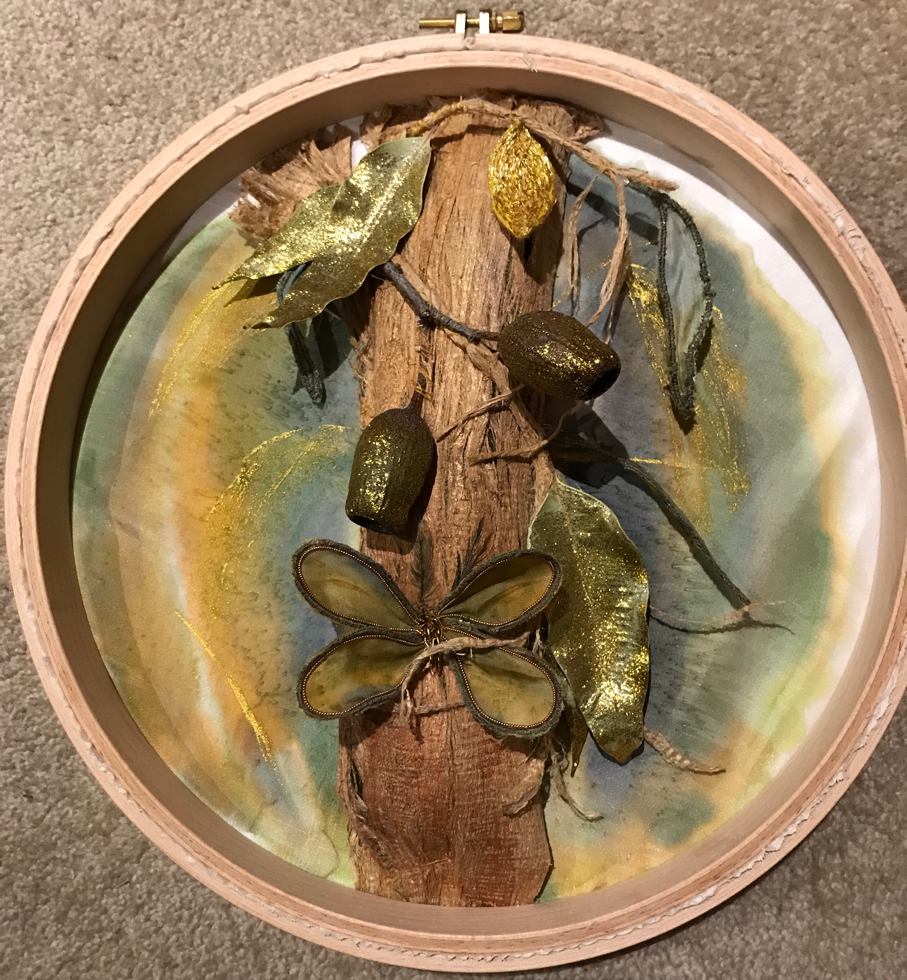 I had a conversation with the helpful staff at Create in Stitch and purchased a wide-edged Nurge hoop.
On their suggestion I mounted the piece on the inside of the hoop, rather than having the embroidered surface flush with the frame. 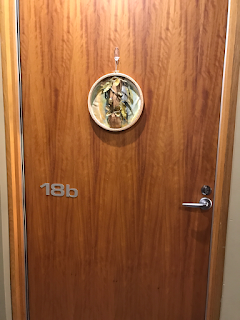 I have added a removable hook to my front door and, for the moment, this hangs as a welcome to guests. This isn't a long-term solution, but I'm not sure this is a long-term piece.

For the moment it is welcoming ,a reminder of a very enjoyable class and a bit of a tribute to Australian flora and fauna.

Posted by Jillian at 11:09 AM No comments: Links to this post