While researching my family tree I came across an eight-year-old relative in the nineteenth century, who is listed in the census as 'lacemaker'. This sent me off to search for others of the same occupation within my family. I found 16 women listed as lacemaker on either a census between 1851 and 1881 or on their marriage certificate.

So I have been researching Buckinghamshire lacemaking.

My seven times maternal great-grandfather, William Ray, 1675-1727,  was born in Piddington, Oxfordshire. He was probably a farm worker, and married Margery Mukell, born in Buckinghamshire in 1677.
Their son, John seems to have married Sarah Coxhead, of Buckinghamshire, by licence in St Mary Magdalen, Beckley, Oxfordshire and the couple settled in Marsh Gibbon, Buckinghamshire in 1836 where they had seven children, all of whom lived their lives either in Marsh Gibbon or the neighbouring Edgcott as agricultural labourers.
Their son John drew the attention of authorities in 1806 at the age of 57, when he was accused of stealing a rail fence, an accusation dismissed by proclamation.


The same John had married Mary Pangston of the neighbouring parish of Twyford in 1775 and this couple also had seven children, baptised in the local parish of Twyford. All their children were agricultural labourers. Their youngest son, Robert, married Mary Susannah Tue of Charndon, Buckinghamshire in 1818 and Robert and Mary's son, Thomas, born a year later, was my 2x great grandfather.
Robert and Mary had eight children at a time when enclosures and urbanisation were forcing people off the land. Mary died aged 61, but Robert lived into his 80s, a pauper for the last decade, taking in lodgers to make ends meet.


Their children were mostly labourers or married to labourers, but the women and children began, as did many others, to take up lacemaking to supplement their income. Bucks lace, worked on bobbins, was bought by travelling middle-men who visited the main lacemaking villages, amongst which were Charndon, Chearsley and Marsh Gibbon.
At least 17 of the women in Robert and Mary's extended family in these three villages were lacemakers in the nineteenth century: Susannah, Ann, Fanny, Mary, and two Sarah Rays, Rebecca, Martha and Mary Ann Lamburn, Ann, Mary and Martha Parker, Sarah and Elizabeth Badrick, Rosa Briscoe,Mary North and Anne Neary.

The industry was served by lacemaking schools, run by a village woman in her home. Parents paid a small amount for their children to attend and be drilled in lacemaking. As they learned, their lace was sold to the laceman and the profit shared between teacher and parent. More than one Ray female aged 8 is listed as lacemaker on censuses.
As the century drew to a close, machine-made Nottingham lace put the cottage industry out of business. In 1880 legislation made primary schooling compulsory, speeding up the closure of lace schools.

There was a lot of hardship and exploitation associated with Bucks lace. It did, however, enable families on or below the poverty line a tiny margin that gave them options they would not otherwise have in a society that was shedding the agricultural way of life on which so many depended.

I am very proud of my association with these women, their skill and labour to improve their families' lot. I include as much of their story as I have been able to reconstruct in my blog because their contribution should not be forgotten
Posted by Jillian at 5:30 PM 1 comment: Links to this post 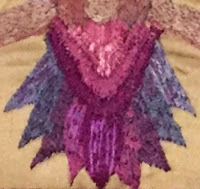 When I last posted an update on my owl-on-gold-silk for the Embroiderers' Guild 50th Anniversary display, I had the tail feathers to go. While in Melbourne I purchased some more silk threads from uchello - ver au sol in the rich bluey- purple- cerise colours I was using, and finished it off. 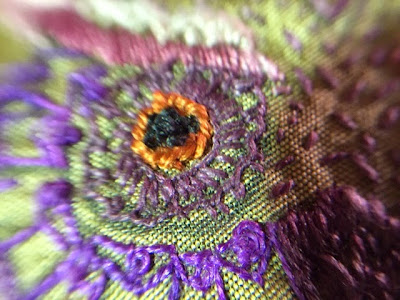 I also completed the eyes. 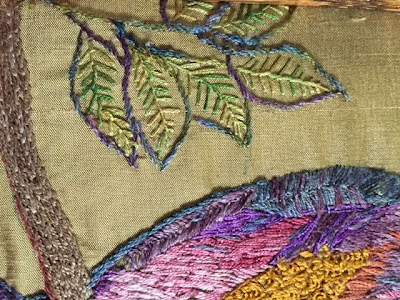 At home I pressed it carefully, but couldn't remove the mark of a fold in the fabric. One of my granddaughters had already suggested I add some leaves from the original design in the Secret Garden colouring book, so I took her advice and covered the mark. 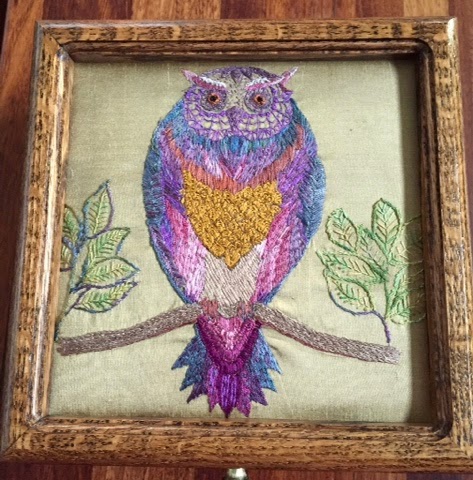 I am quite pleased with this result. Niamh likes owls and will use the box, so it is hers after the exhibition, plus it has been fun to do. It will also be interesting to see the variety of projects on display in October when the Guild displays what members have done with their square of gold silk.

Posted by Jillian at 5:19 PM 2 comments: Links to this post

My Julia Gillard Piece for the Embroiderers' Guild SALA ( South Australian Living Arts) Exhibition is now finished. I filled in gaps in the coverage. Here are a few photos of the detail. 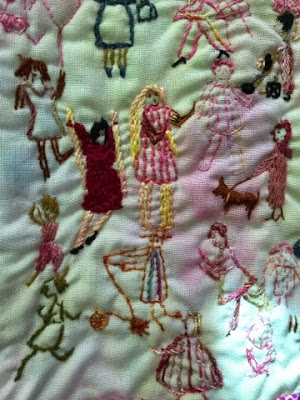 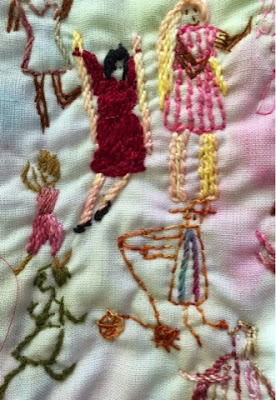 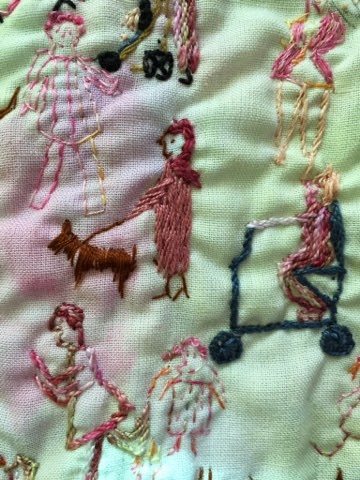 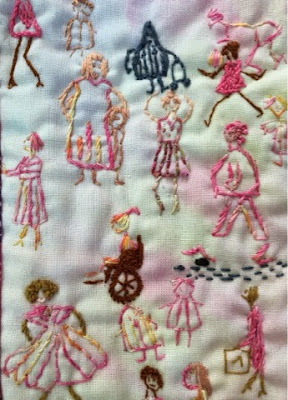 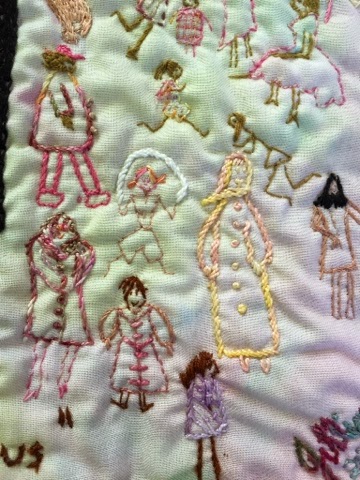 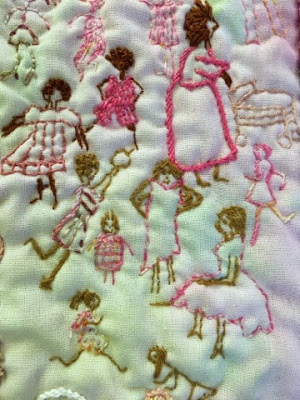 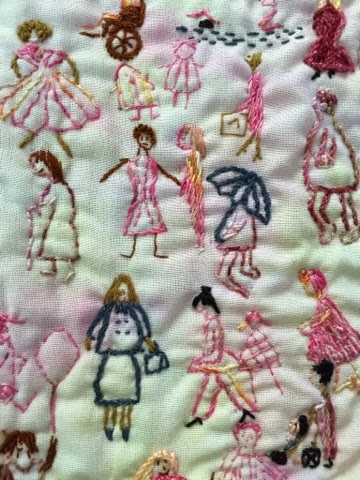 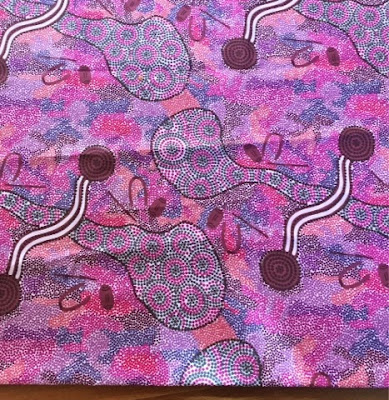 I found some Australian fabric with a design called "Women dancing rain " by Shirleen Campbell that I bought to border the piece.


Here it is finished. 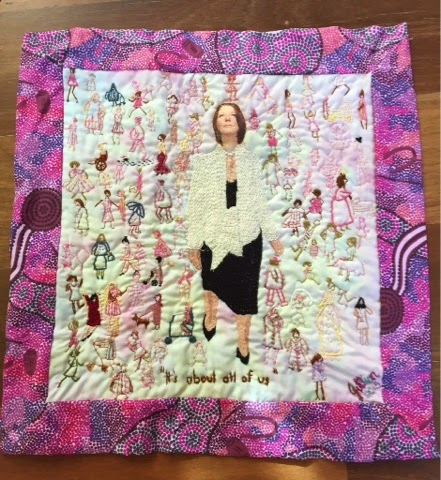 I enjoyed this project immensely - from concept to finish. I especially enjoyed creating on the fly. I am considering trying another one using a darker piece of fabric and a different photo, just to see if I can improve. It is also a great travel project. I'm not sure if it will fit with what others are doing for the Guild's Icons Exhibition, but it's been great for me.

Posted by Jillian at 5:13 PM 5 comments: Links to this post

On 31 May I attended a one-day course at the Royal School of Needlework at Hampton Court. An account of the day can be found in my travel blog.

There were many interesting needlework elements in the day, not the least of which were those little tips and habits that individual teachers impart. Heather Lewis was no exception. The thing I loved most was her repeated " Be brave!" - continued encouragement to take risks and have a go with a stitch or a technique. I might find a way to embroider it, I found it so compelling.

Of interest to me also was her insistence on always starting with a knot in the thread, planted from the top, secured by two small stitches that are stitched over before the knot is cut. It is a form of waste knot within the work itself. Heather attributes this habit to the amount of work she did as a student at the RSN working on  huge frames that could only with difficulty be accessed from underneath. 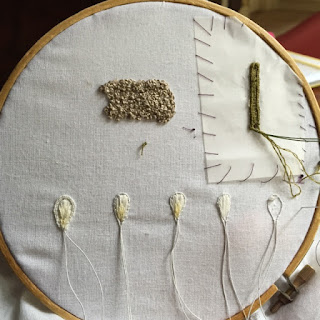 I got into strife with the needlelace leaf because I assumed the corded needle-lace would be worked around and around instead, as it is, worked back and forth. Always dangerous to make assumptions. I did read the instructions - but my assumptions got in the way of understanding. I managed, after the class, to adapt what I had done - a lot easier than undoing it, and I didn't have enough wire at hand to start again from scratch.

Another useful technique was placing strong tracing paper under the needlelace leaf so that it can be stitched without danger of attaching it to the underlying fabric by mistake.
Perhaps most useful of all was Heather's insistence that French knots only ever have one wrap. If you want to make a fatter knot, use more thread. So our sheep are made with 6 strand French knots. The six strands are a mixture of two colours - giving that lovely mottled sheep effect. So simple - but I would never have thought of it. 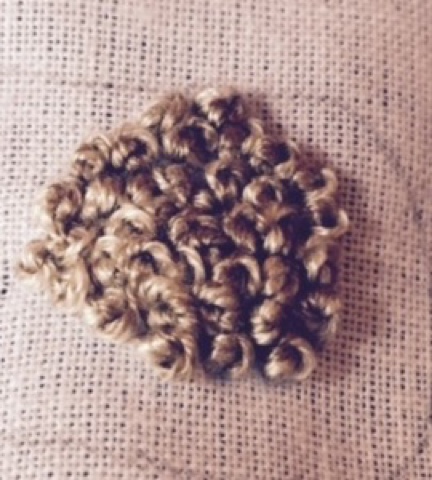 I spent a few hours the day after the class working on my piece. This was partly because I am an obsessive finisher, but also because I wanted to reinforce the learning. I thought I'd forget if I left it until I was home.
The background fabric was green quilting fabric backed with white cotton.
So I constructed the daisy - pushing the wires through and stitching them down - and added the leaf. 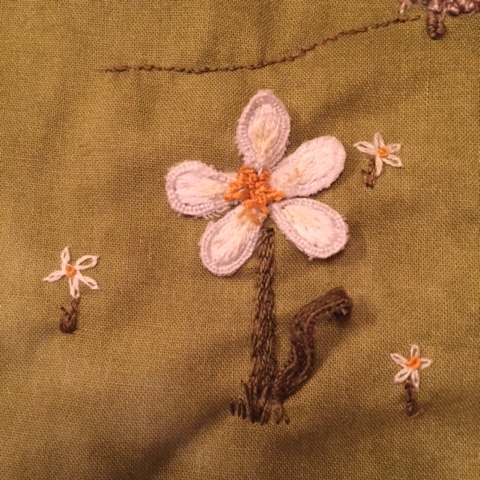 I then cut out and attached the sheep, in the marked position, adding the tiny face in felt and constructing the horns from wrapped wire and adding bullion knot legs. 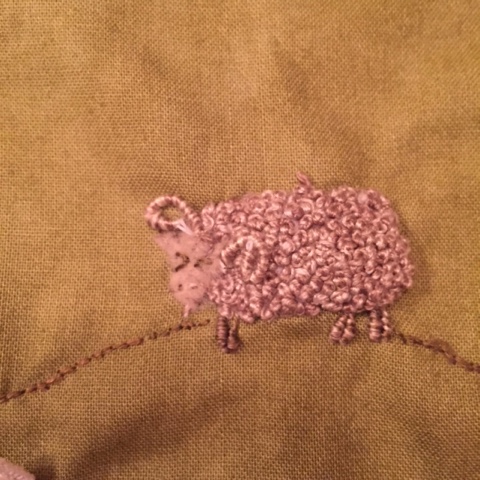 A back stitched hill and lazy daisies complete the piece. 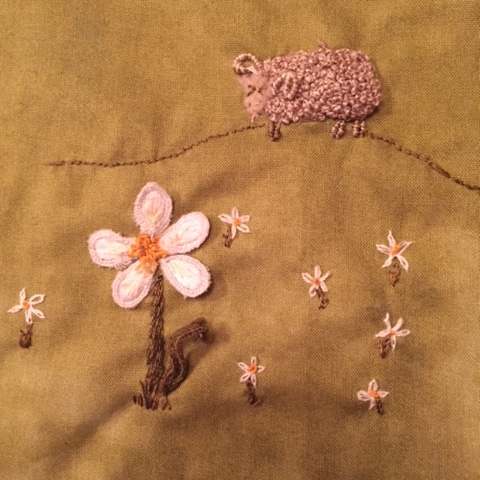 I'm thinking it might be another box lid - but will wait until I'm home to decide.
It's been good learning- and heaps of fun. 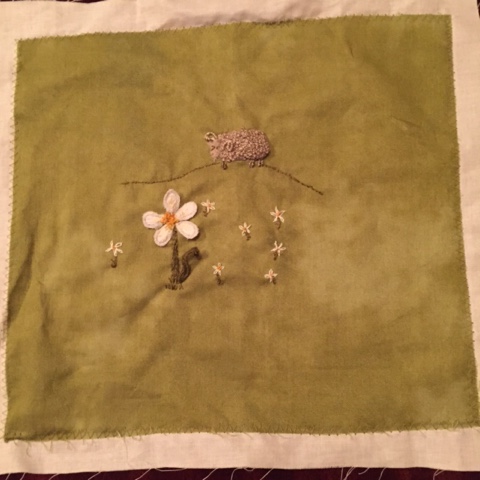 Posted by Jillian at 2:50 AM 7 comments: Links to this post