The last time I posted progress on my patchwork quilt, I thought I had eight rows of hexagons to add to get the required size (25 rows).

Since then I have worked steadily and have added four of the eight rows.

I am still working to a routine of constructing the hexies two rows at a time - black hexagons first, then coloured, join each into a row, then embroider the centres of the coloured rows, then join the two row together and add them to the quilt.

I enjoy each bit of the process but the treat is the embroidery of the centres. 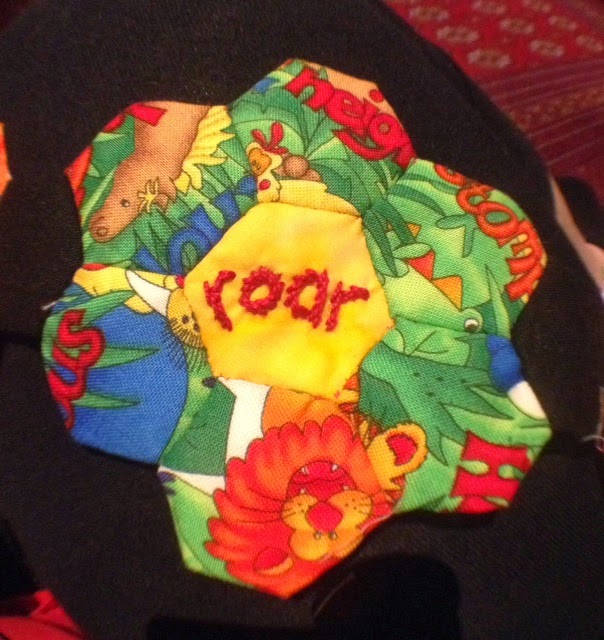 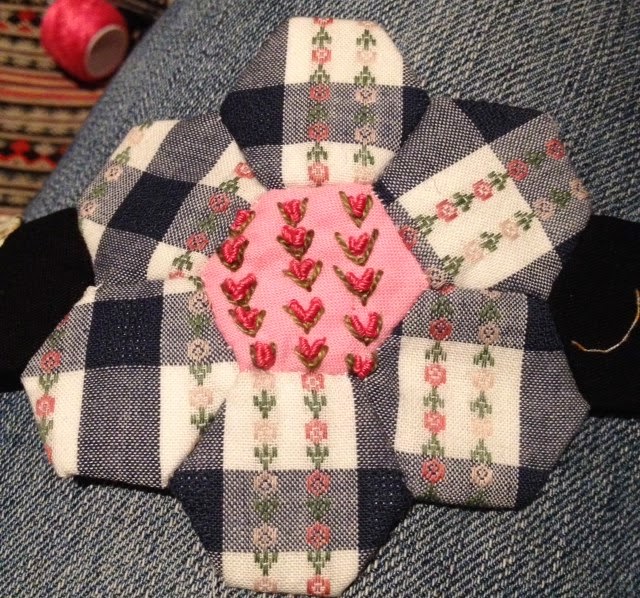 I've experimented with a few on the rows just finished, including some bullion buds, a circle and a satin stitch flower. 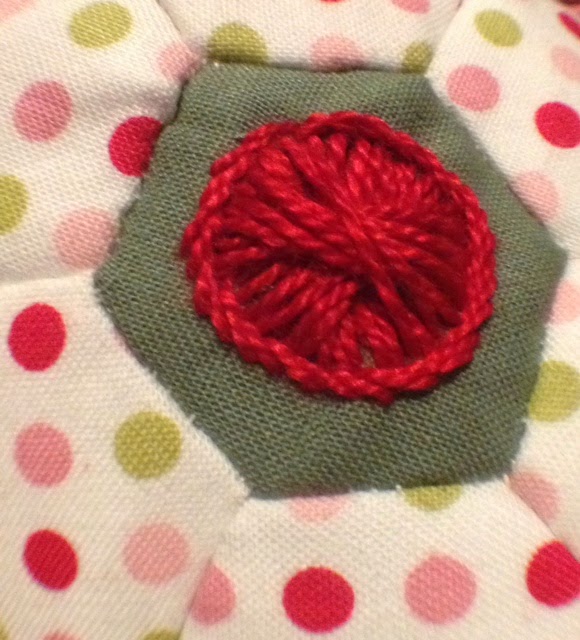 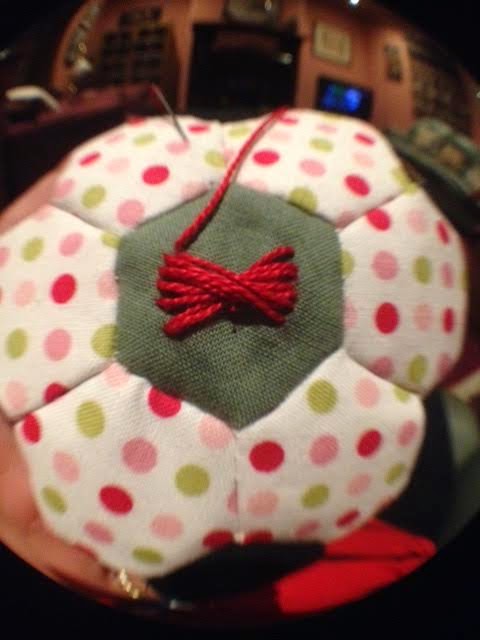 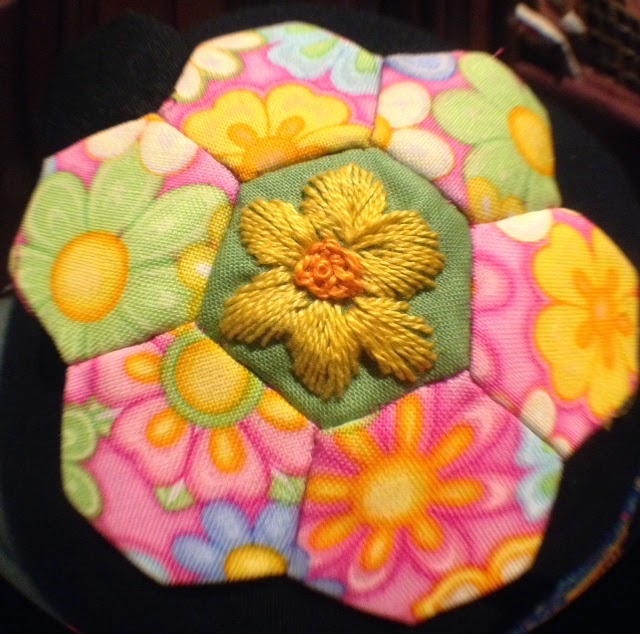 Of course, there have been quite a few old favourites. 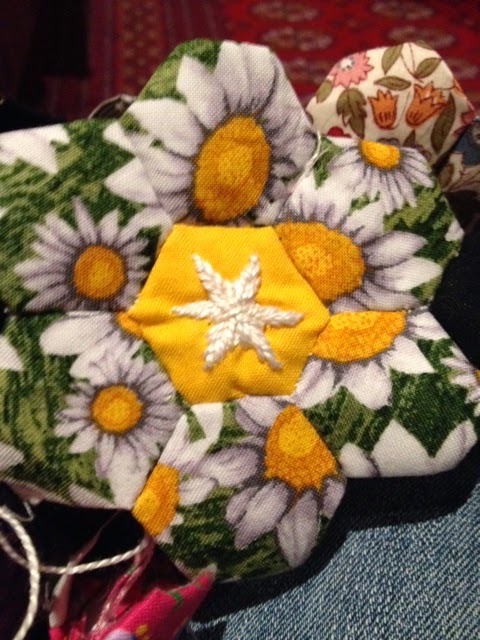 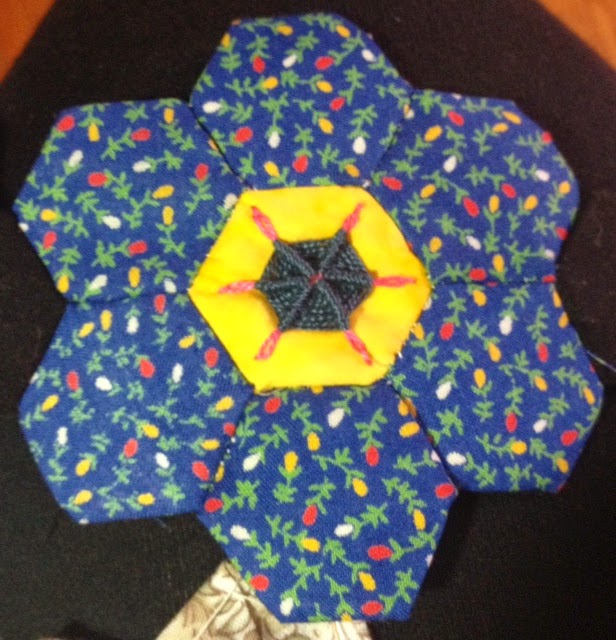 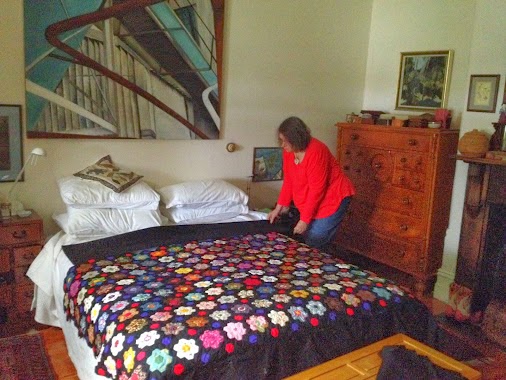 When I tried the now 21-row quilt on our bed I decided that I only need two, not four more rows. With the edging, this will easily be as high as I want the quilt to come on the bed. In fact, I am wondering if I could/should make the top border on the quilt narrower than on the other three sides. I don't want a black border to overwhelm the look of the quilt and I don't want to have a double layer of quilt around our heads. I will think about this as I add the last two rows of hexagons.

Posted by Jillian at 12:33 PM 6 comments: Links to this post

I have written some time ago about my grandmother's stitching and also about my mother's stash. For some time I have intended to put on record the legacy I owe to my mother's sister, Emily Grace Molloy (nee Ray), my Aunty Grace. 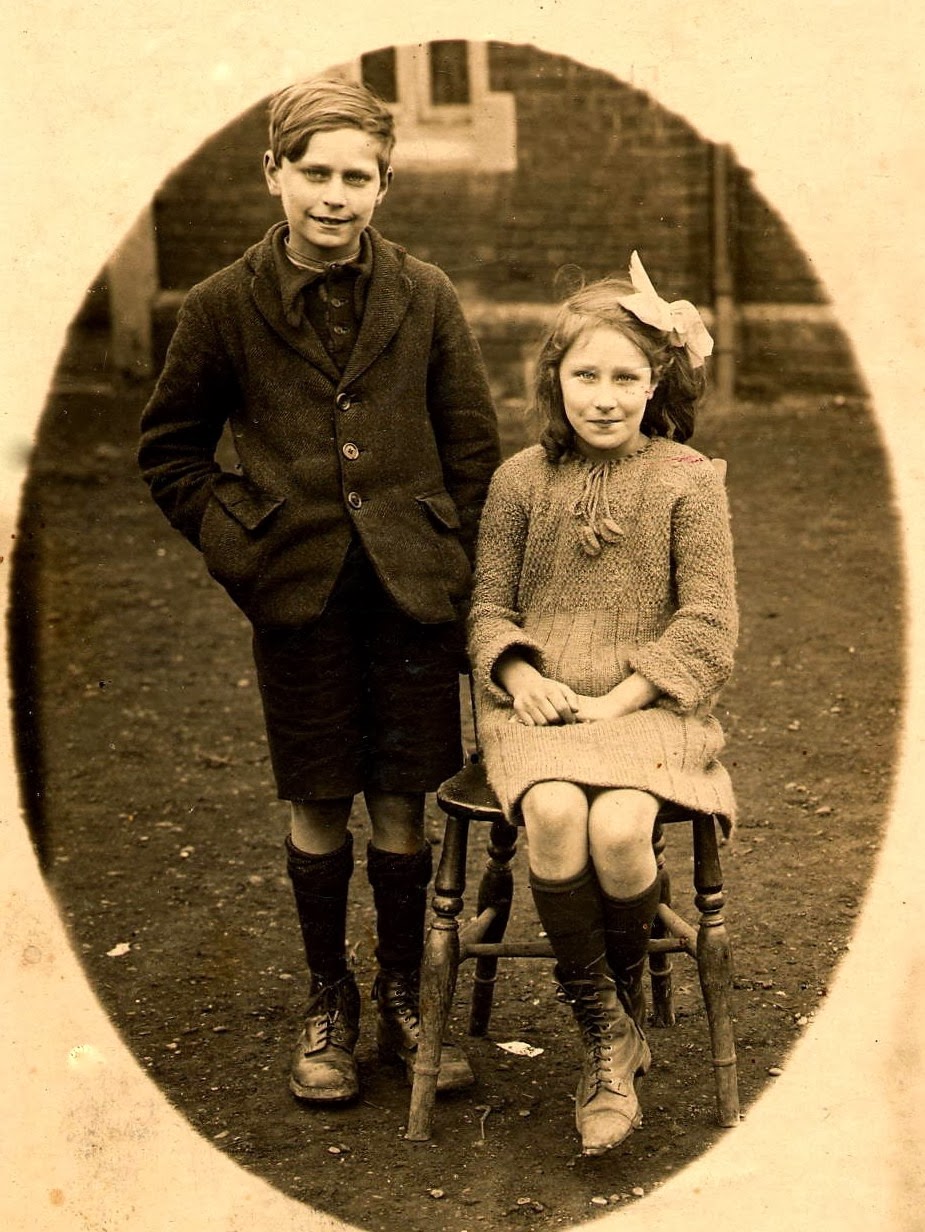 Aunty Grace was born in England in 1915, ten years before my mother's birth. She had a brother, Albert, two years older than her. Their father went to WWI in 1914 and did not see Grace until she was 2 years old. Although their mother came from a large supportive family, times were hard. After the War, employment was hard to come by. Their father got a job in an engineering factory, but it went under in 1922. The family moved to Bulphin, near Grays in Essex, where their parents acted as caretakers to the church and church school.

Grace and her brother went to school in Bulphin, where this photo was taken in about 1926. Grace is wearing a dress knitted by her mother. All clothes were made at home and Grace learnt early on to sew, knit and crochet.

The family migrated to Sydney in 1929 - on the last migrant ship before Australia suspended migration due to the Great Depression. Life was very tough for several years. Grace went into service and, after several years, worked in a nursery in Mascot, then at Johnson and Johnson before meeting Sid Molloy, her future husband, who was in the Australian Navy. They were married in 1941.

Aunty Grace lived in Mascot until the family moved to Norahville, north of Sydney around 1959. There she was heavily involved in the local community, especially the RSL. She moved to Perth in Western Australia to live with her daughter, after the death of Uncle Sid in 2000. She died in Perth in 2005. 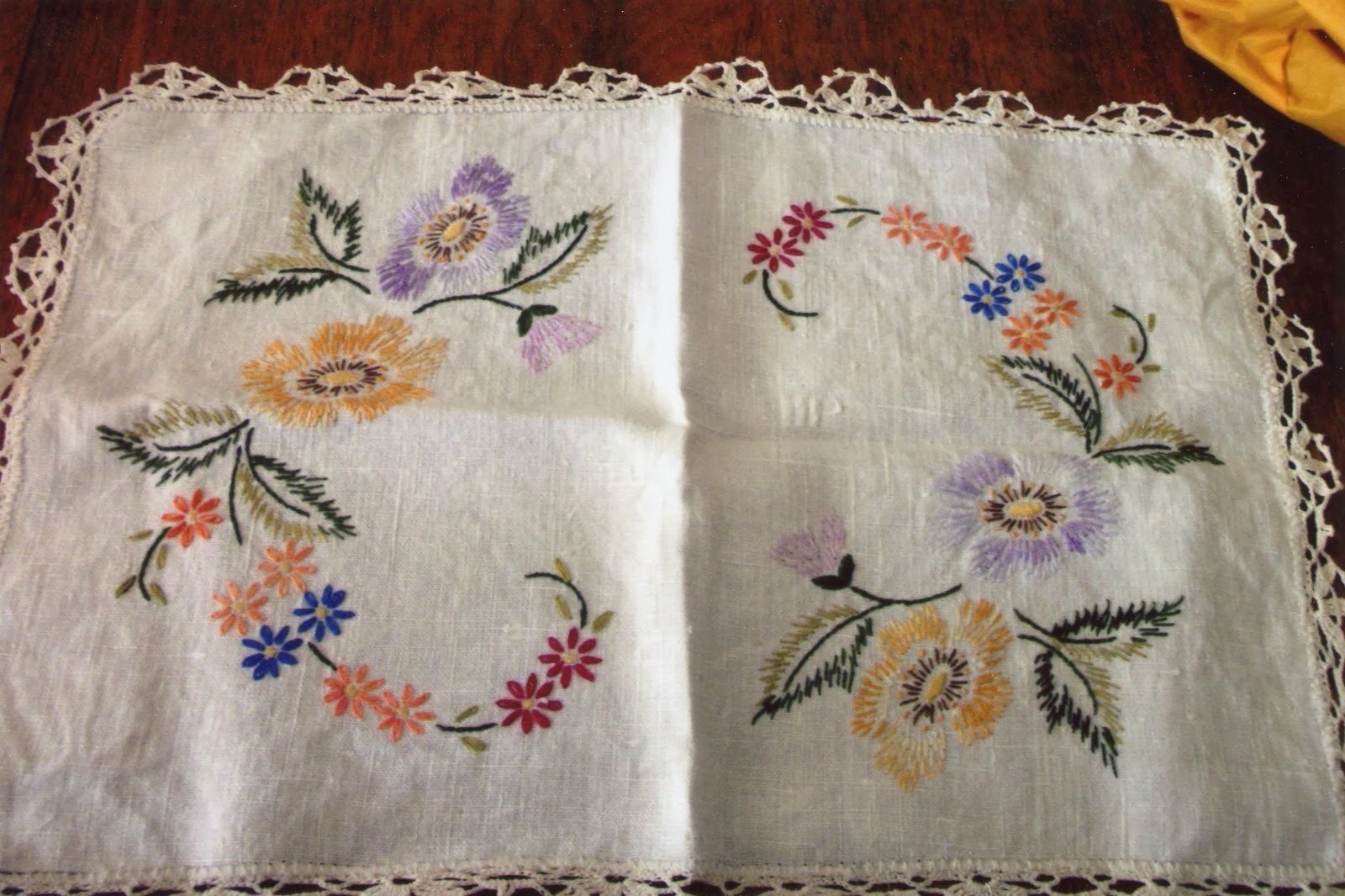 I remember Aunty Grace, like my mother and grandmother, making all her own clothes, and clothes for her daughter. She was fashion-conscious and liked to dress well. I remember her farewelling us at a station in a floral dress she had made - of bubble nylon with a full circle skirt and cross-over bodice. She had a good collection of  Glory Box items, always on display in her house (as were my mother's in ours).

The difference between my mother's and Aunty Grace's was in the quality of the crocheted edges. Aunty Grace was the acknowledged Queen of Crochet. My mother was a very basic crocheter and even their mother, who was estranged from Grace, had nothing but praise for Grace's crochet ("Grace is the one who can crochet!" I hear her saying) and did not attempt to compete with her.

She crocheted table mats for me as a wedding present at my request. And a doiley when I moved into my first flat. 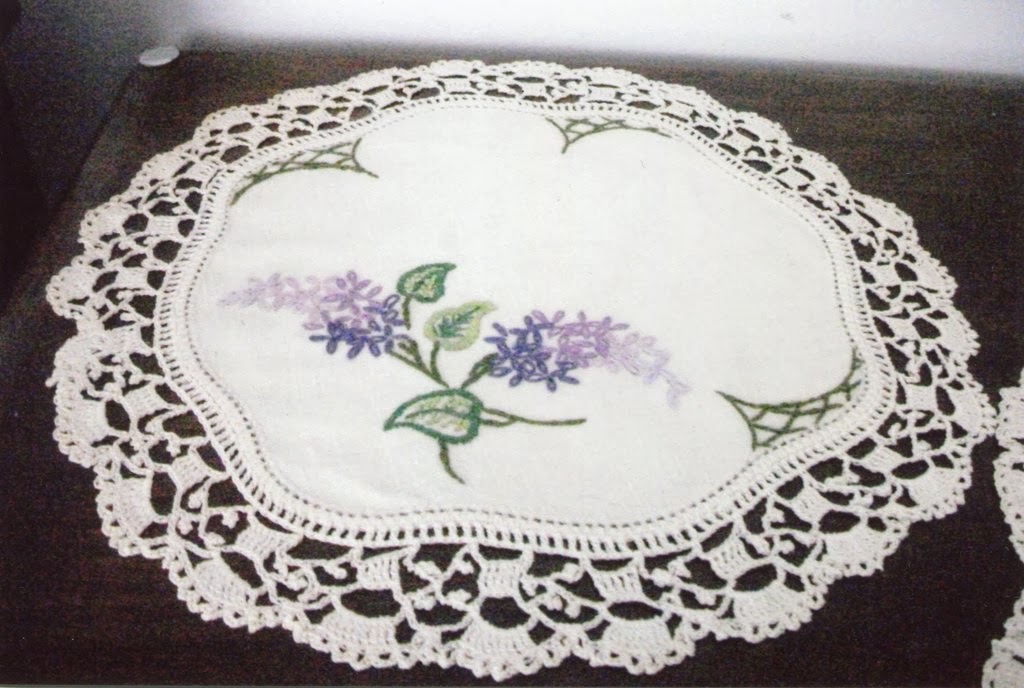 Her work is still lovely.


She gave away far more than she kept - to local groups and charities, to friends and relatives.

The photos here are from the collection of my cousin in Perth. 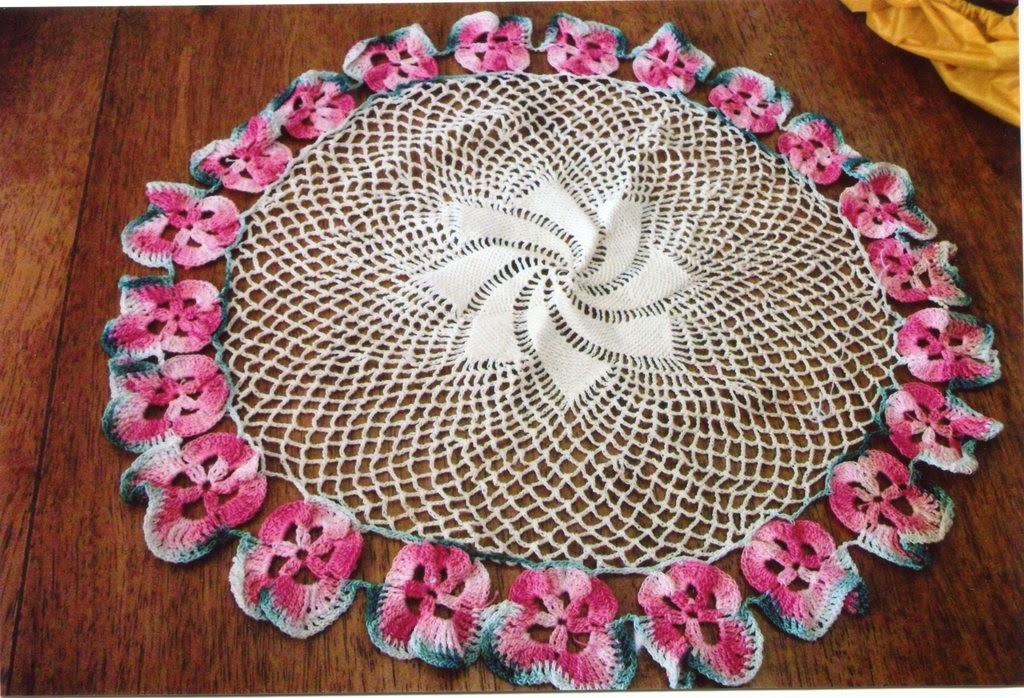 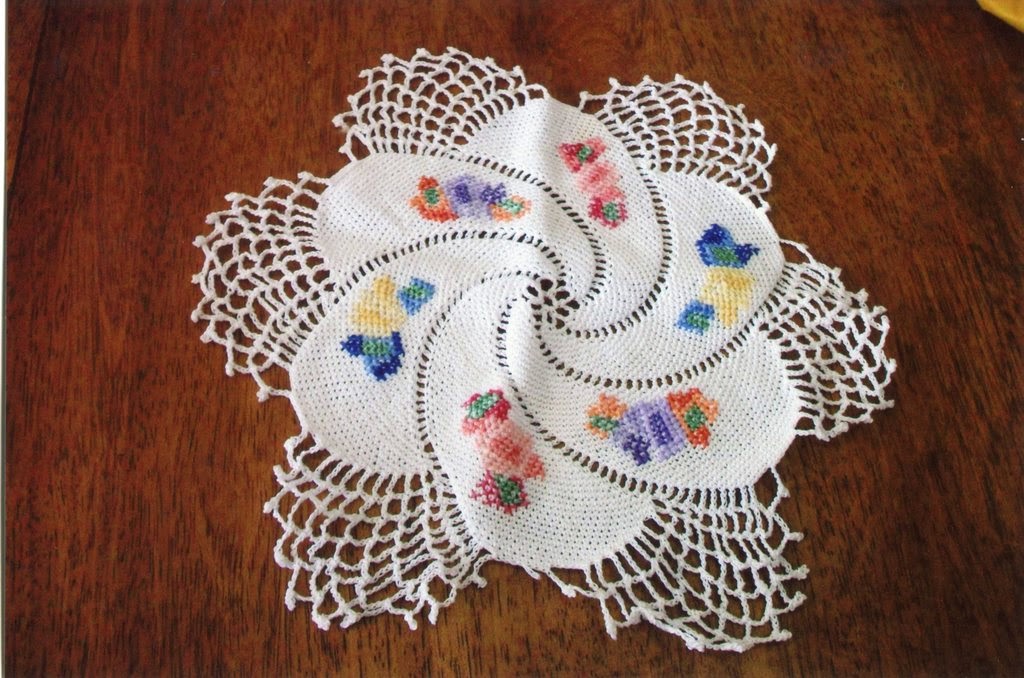 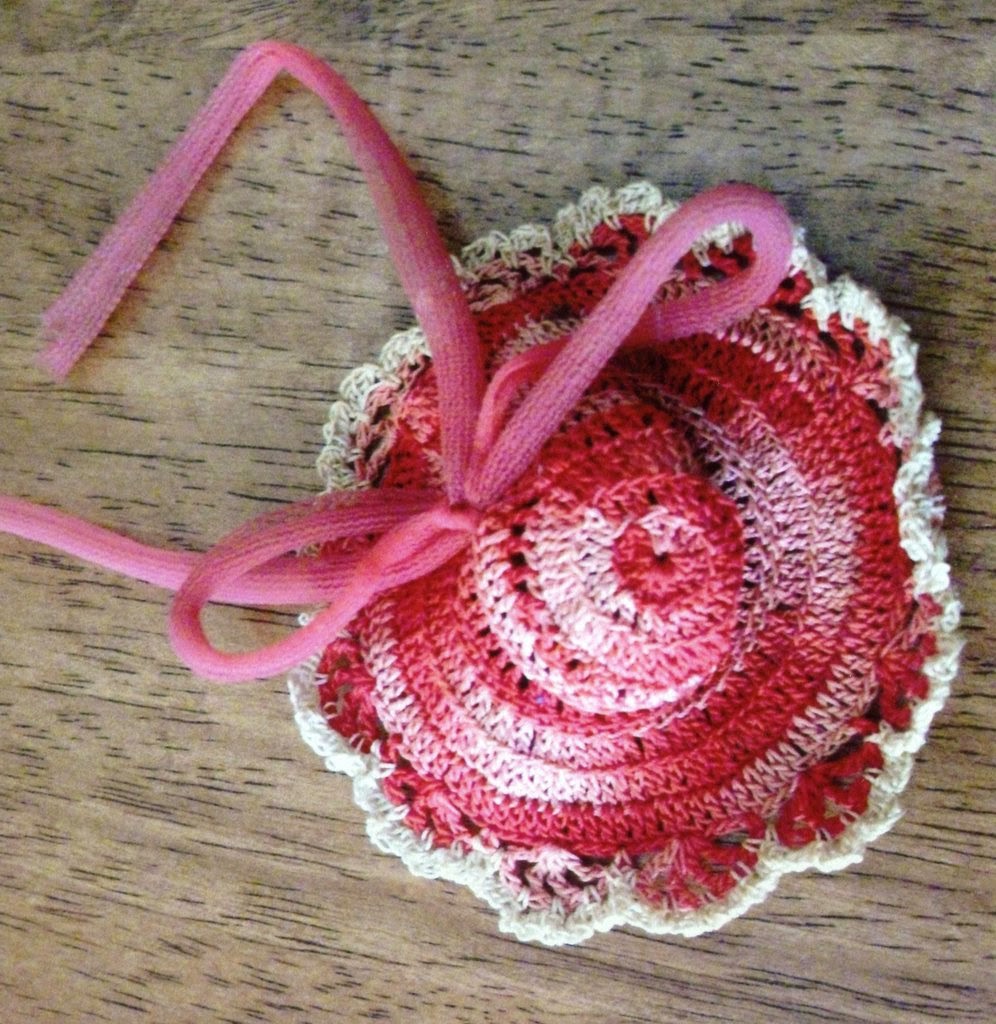 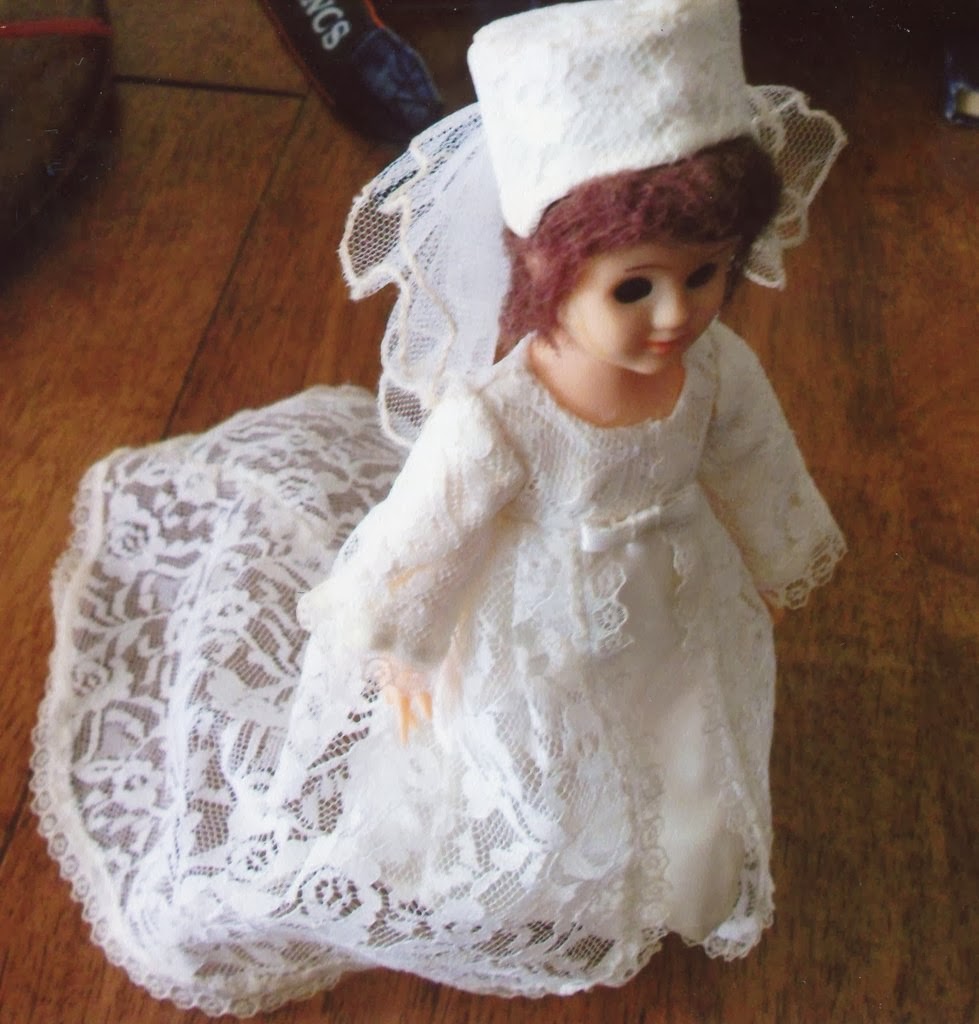 Crochet wasn't her only output. She dressed dolls, made bow-ties, ties, hats and baby outfits for many, many people and causes.

Other Crafts
Stitching wasn't the only craft women in my family engaged in. My mother took up painting, my grandmother hooked rugs. Aunty Grace learned and practised leatherwork and copperwork. Two examples of her copperwork survive. 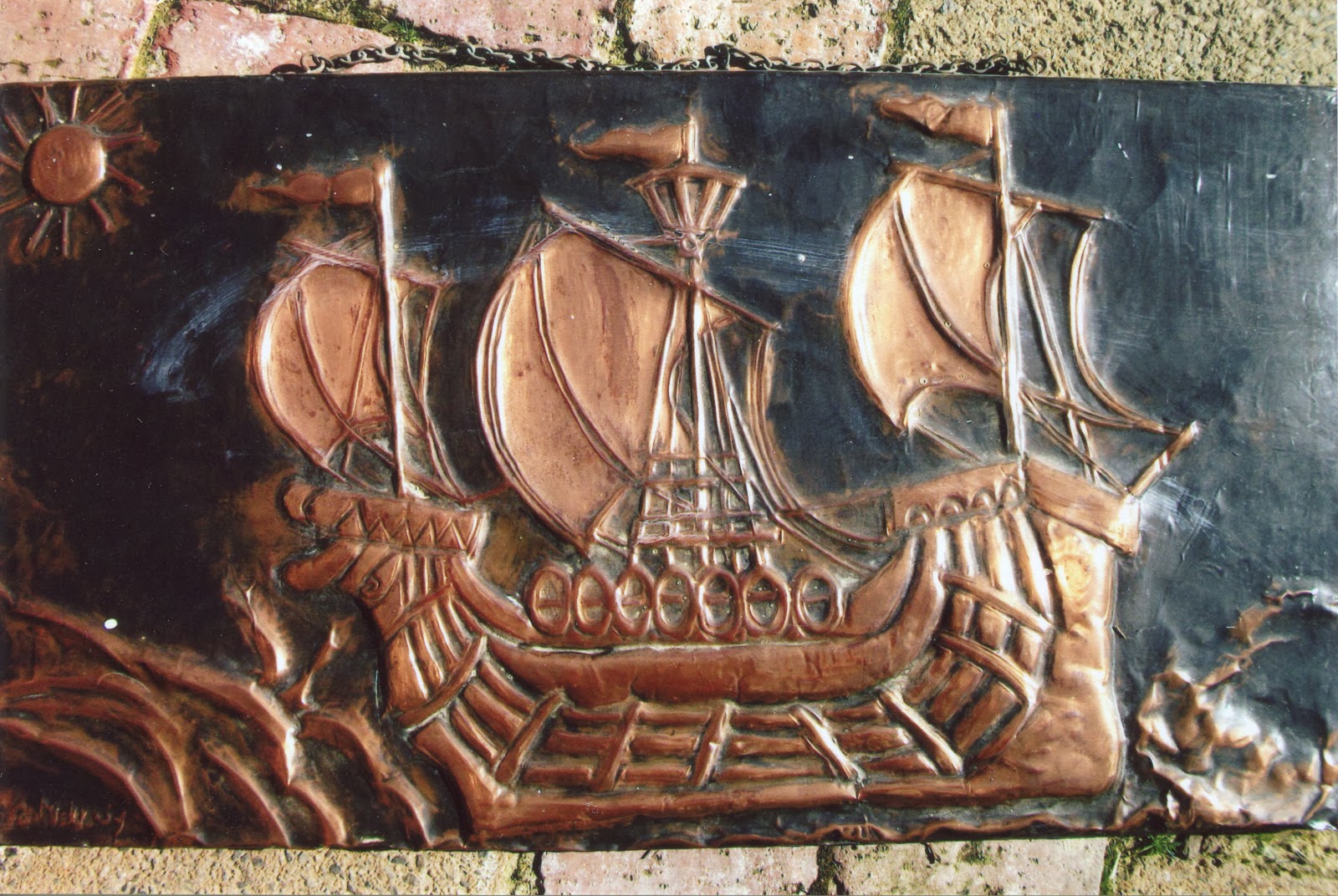 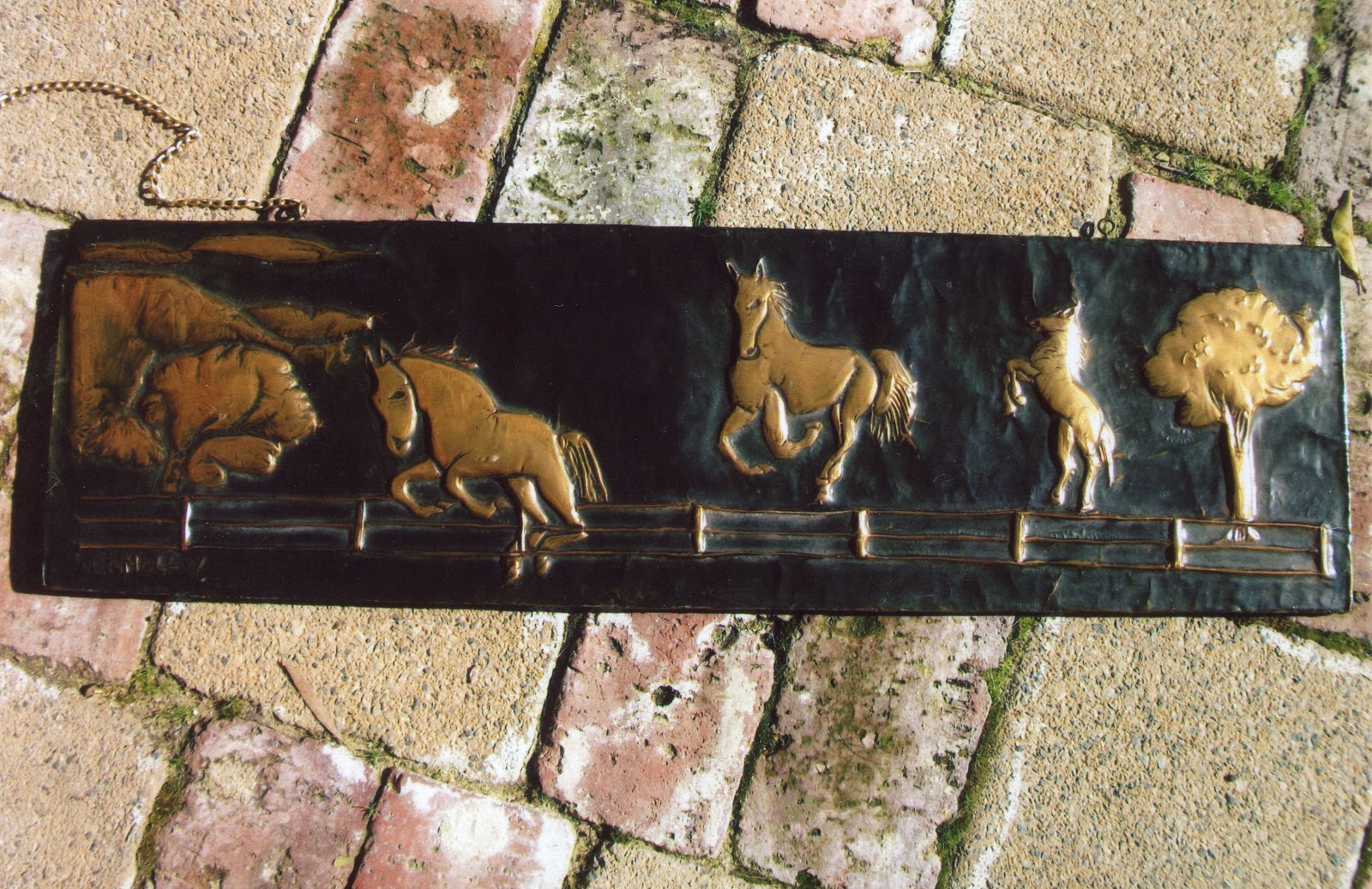 I am really grateful to have grown up in a family in which women took it for granted that they could (indeed must) make beautiful and useful things. I love looking at Aunty Grace's work, remembering her many kindnesses to me and drawing on the confidence she, her mother and her sister gave me.
Posted by Jillian at 5:37 PM 7 comments: Links to this post 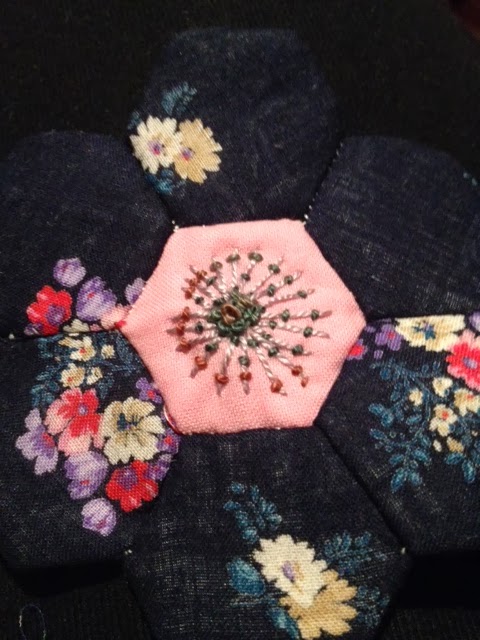 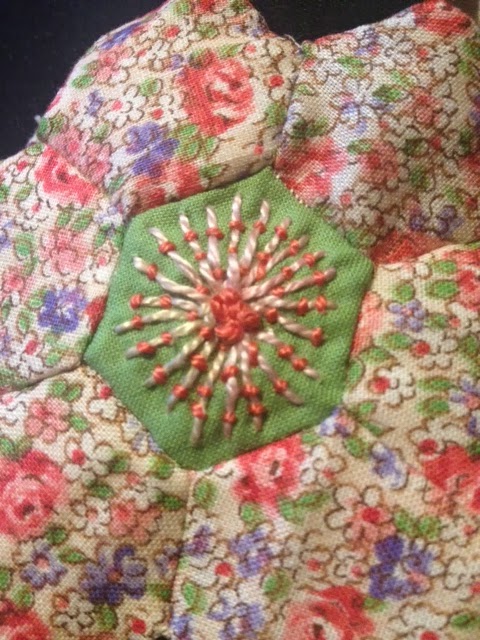 Here are a few more of the embroidered centres of my hexagons. The first two are couched daisies - picked up from a project in an embroidery magazine. 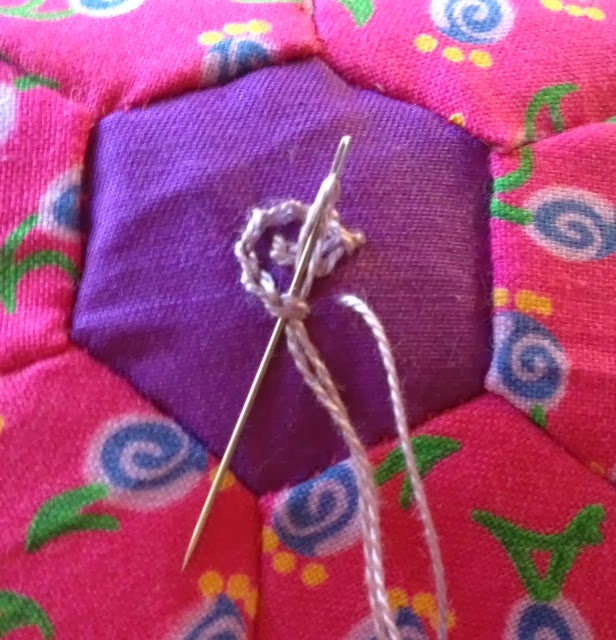 This is a spiral using reverse chain stitch - another idea from Mary Corbett. I'm not sure this is any faster than regular chain stitch, but it may be more even, and I enjoyed trying it out. 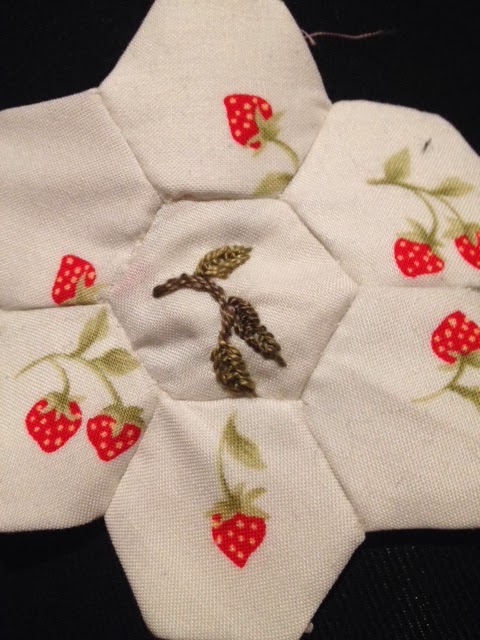 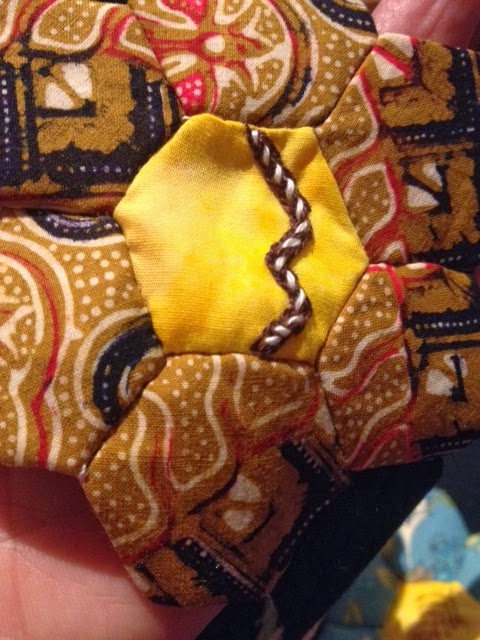 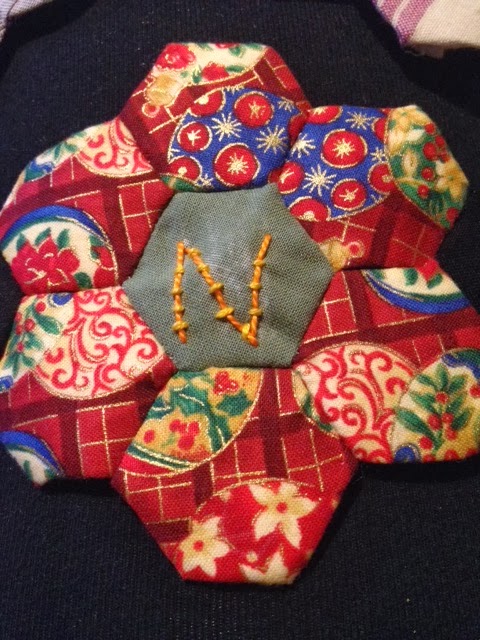 I also played around with strawberry leaves and a whipped stem stitch.


Niamh took me up on a suggestion she embroider her initial on one centre. This is the centre she chose and she managed a very creditable couched initial. 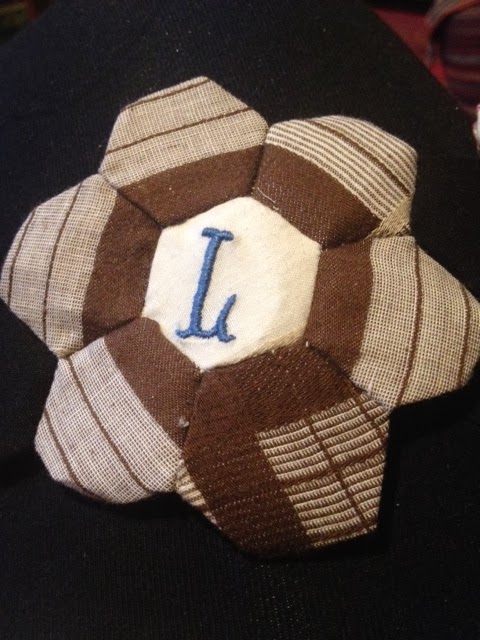 The one on the right was not embroidered by me. It is one of my late father's initialled hankies.


Since last posting I have added four rows to the quilt - two black and two coloured. I have eight more rows to go and it now looks like this: 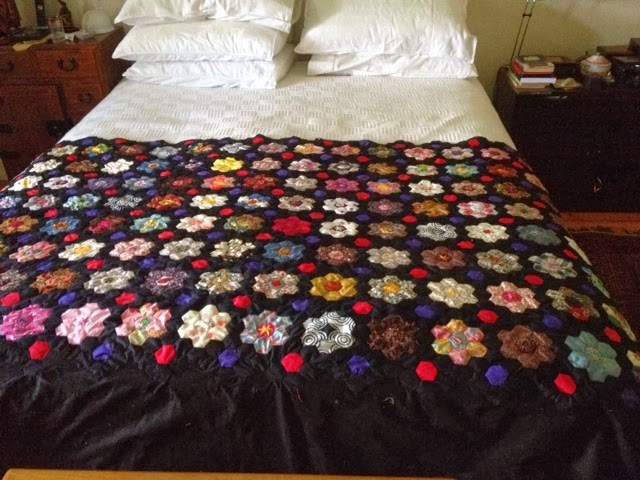 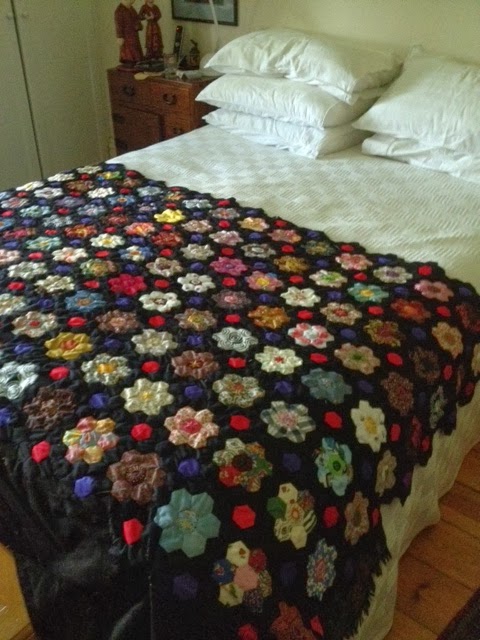 Posted by Jillian at 2:49 PM 6 comments: Links to this post