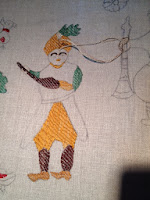 I haven't entirely neglected my Skyros Men. Circumstances over the last weeks have meant I've found less  time to sit at the large frame in which my last panel is mounted. I've been away a bit and needing projects I can carry with me, or work in other parts of the house.

I have, however, managed to sit and complete bits of the tenth man on and off over the last few weeks. 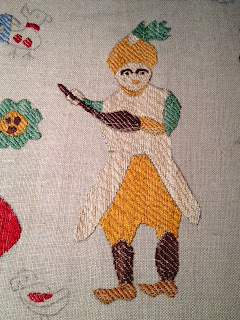 This weekend I made a concerted effort to work on the large areas - choosing once again to use my favourite Bokhara stitch. It gives good coverage and I enjoy it. As I have said before, it is a stitch used in the Mediterranean around the time of these figures and has the same sloping effect as the running stitch off-set by one thread in each row.

Admittedly, Bokhara is more a Turkish influence - but there was Turkish influence on Skyros. I am playing the role of an embroiderer from other parts of the Ottoman Empire engaged to work on Skyros and intent on saving time and remaining motivated! 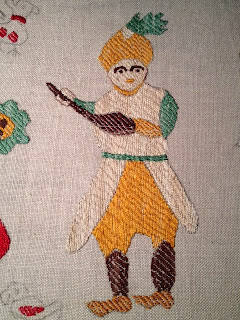 The Tenth Man is now finished. Two to go - plus a few stray birds and flowers!

your project will soon be finished, maybe you will be looking for another chair so you can do some more as this is working out so beautifully

Nice colours on this one. I love the combination of gold and cream these days. It looks so rich!

You must be feeling the end is close now!