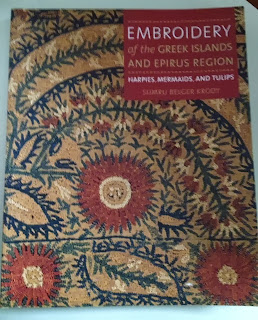 I needed a design for the cushion seat of my Skyros Chair. I could have repeated some of the men, but wanted to retain the effect of the line of men dancing around the back of the chair, so I spent quite a bit of time looking through my books to find other designs that were appropriate to Skyros embroidery. 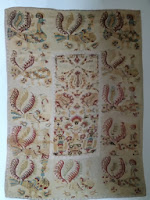 In Embroidery of the Greek Islands and Epirus Region by Sumru Belger Krody, I found a number of examples of Skyros work, that include a range of exaggerated and mythical animals. I settled on a bed-hanging that used a series of embellished roosters. 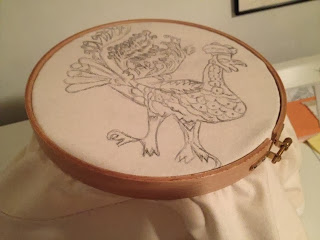 I enlarged and adapted one of these roosters, and traced it on to the cover of the cushion that came with the chair. The fabric on this original chair cover was a strong, woven cream linen-like fabric, soft and loosely enough woven to stitch.

I tried it in my sitting frame, hoping to be able to move it around the house more easily than the large frame in which I am still working the Skyros Men, and thus work both projects at once. 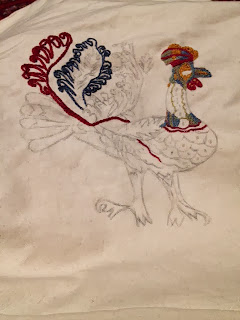 I soon found, however, that the project worked much better out of the frame altogether.

The stitches used in the bed hanging, according to Krody, were outline stitch, chain stitch, satin stitch and a form of counted-thread running stitch. As I could not count the threads in the chair fabric, I restricted myself to the other three stitches - mostly outline and chain to take the wear it is likely to get. These stitches were much easier to manage out of the frame. 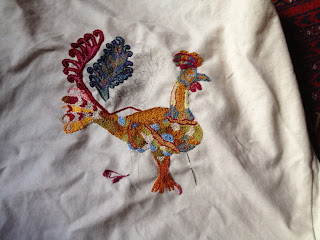 I took the general colour palette from the original and used mainly threads I had - including a couple of hanks of Gloriana silk, oneblues/mauves/greeny-gold and another pinky-reds. I had several shades of Madiera silk in golds and greens, and bought a few more when these ran out. I used  DMC perle 8 for the heavy outline. 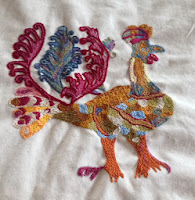 I am pretty pleased with the result. My rooster takes himself a lot more seriously than the Skyros Men take themselves, which provides a nice contrast. 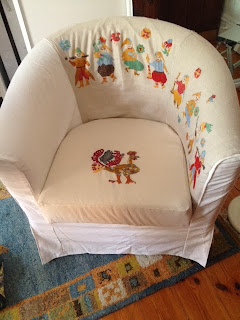