A second project I tried from Issue 75 of Stitch magazine, was one called Perfect Petals, a very clever crewel sampler by Tracy A. Franklin using the shape of a 12-petalled flower. I remembered that amongst the spare Raffal scarves I bought last year was one in a green wool that was not going to lend itself to the Australian flora theme for which they were intended, so I dug it out.

At the Embroiderer's Guild I heard the sad news that Christina's on Prospect Road was closing its doors at the end of February, so I paid  Monika, Rosemarie and Gunter  a visit to wish them well in their move to online only, and to find some thread for this project. As always, they were very helpful and I do hope their business adjusts. 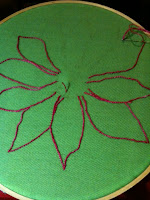 I transferred the design to one end of the scarf using a sepia pen then raced against the time to get the petals outlined in stem stitch before the pen faded.

Unfortunately, the screws holding the hoop to my seat frame have come adrift and I am struggling to repair it, so I used a hand-held hoop - not good on my wrist.

The stitches, however, are terrific. 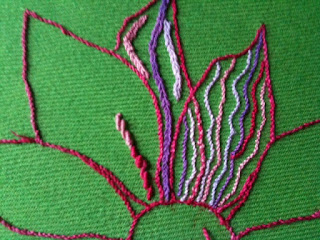 Each petal has a different stitch. Most are simple - stem stitch, chain stitch, double chain, seed stitch, closed herringbone. A few, however, are new to me.

I struggled a bit with a stem stitch made  up of bullions - but the effect is still quite good. 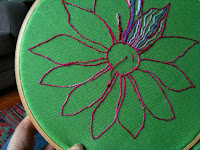 There is room to improvise and create your own textures. 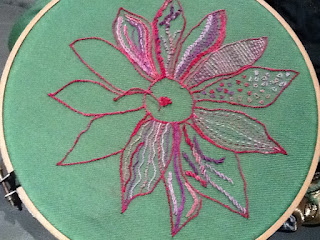 I had a plane trip while working on this and it was a good one for taking with me. Once you have the idea and the sequence you don't need to be watching the pattern, but can work within the framework.

It really is a lot of fun. There are endless possibilities using different colours and threads. 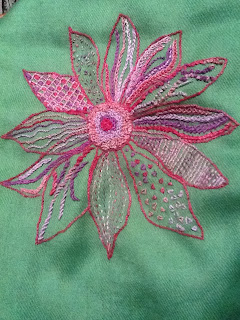 This is the first flower finished and I was happy to press on with another on the other end. I'm beginning to think about tassels - will I have the patience to make them for this scarf?

The other end was easier still because I was carrying the pattern on the finished end! I made a few changes, like running the couched lines along rather than across the leaf, and the colour sequences are different. 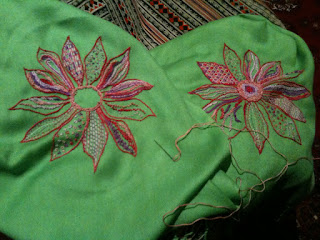 After talking to a friend in Melbourne, I decided to try a little bit of beading on the tied-off fringe, rather than tassels. 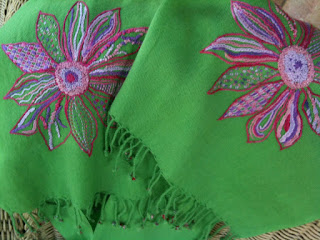 I used 3-4 seed beads on each fringe tie, in the colour range of the embroidery plus green. I like the result. It gives a little flash of colour without taking the eye from the  embroidery. 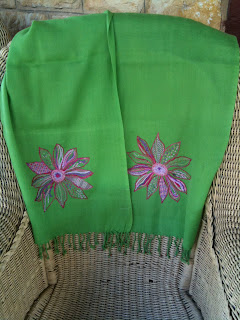 I think the sampler pattern worked well on this scarf, but it would have plenty of other applications. I might use it again some day.
Posted by Jillian at 8:29 AM

I love how the petals are different to each other. It looks fantastic as a scarf. I was getting Stitch for a while (about 5 issues) but decided there wasn't enough in it to justify the price. I suppose I just expect every magazine to live up to insprations lofty heights LOL. Mind you there are a few things in the ones I have that might get an airing later in the year. Got some catching up to do first.

My subscription is a gift from my daughter. I thought this issue was a really good one.

This is inspiring! I love all the different ways of filling in the petals, and the colour mix is wonderful.

Jillian - this is beautiful - and looks doable for novices! Perhaps I could be enticed away from crocheting rugs!?!?

You are very welcome to borrow my copy of the magazine. You could probably embroider it on to a crocheted rug!