I traced up my third chair panel of Skyros Men as soon as I finished the second one. By careful manipulation, I managed to get all four men following the slope of the arm of the chair without putting them very far across the grain of the linen. 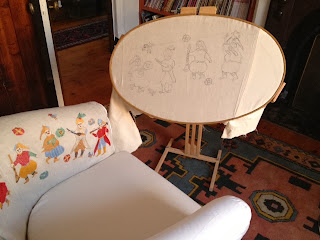 I then added the edges and mounted it into my oval frame. This time, however, I tried the oval frame in my all-purpose floor stand, rather than in the stand that came with the oval hoop.

I have had some difficulty with the clamps on this general stand but my friend Alan Bevan made some adjustments and adaptations for me. This is the first chance I have had to try it out since he made them, and I am hoping it will give me more flexibility than the stand that came with the oval hoop. 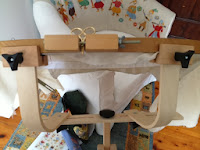 The general stand is rather better suited to roller frames that have straight sides, but I managed to arrange the hoop in the stand using the clamps on the top of the oval where the curve is minimal. 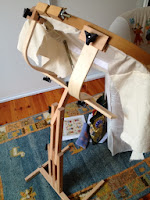 So far it has worked well. It allows me to have the work at a more upright angle to my body. The original stand puts the work between 90 degrees and about 75 degrees to your body. This allows me more like 60-45 degrees. 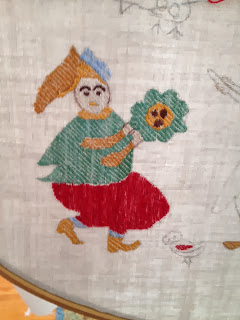 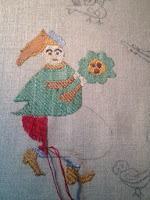 I am working, as before, largely in darning stitch, but using Bokhara on his pantaloons.


I am also working up a scheme for the cushion of the chair - but more on that later!

Here he is finished.

Not far to go now Jillian.

You're right,Katherine, I'm on the home stretch.

such a lovely project, I wonder will anyone sit on the chair when done, surely not

I love how these guys are all different, but uniformly jolly! :D

I hope the modified stand is working well for you now.