Mend and Make Do - or Repair and Renew 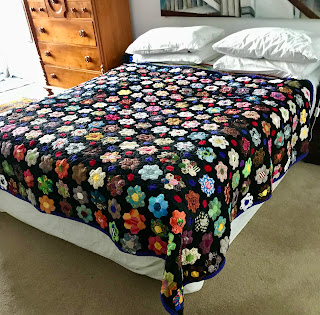 After many months of inactivity on the hexie front, on Tuesday this week I got out my winter quilt and began to applique the remaining 60 or so hexies around the edges. By Friday I realised I would be 3 hexies short, so I created 3 more. That evening I finished appliqueing them around the edge. This (left) is what it looks like. 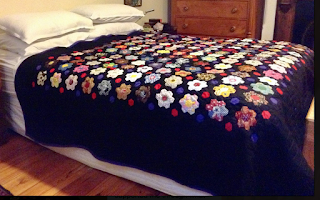 This is what it looked like when I originally finished it in April 2014. 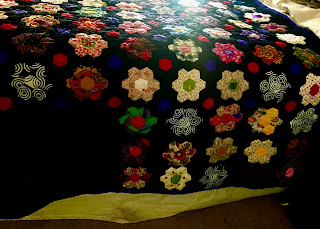 In 2018 I realised that the wadding was leaking through the black edge, along the quilting, which was straight horizontal lines. I decided the best way to deal with this was to cover the border with more hexies. The easiest way to do it was to construct the hexies, then applique them to the black border. By March last year I had covered the top edge, one side edge and part of the second side edge before I ran out of hexies. I spent most of last Winter constructing the  77 hexies needed to finish it. Meanwhile I used the quilt on my bed with one and a half sides still not covered.

When the quilt came off my bed at the end of Winter  I had 75 hexies ready to apply - but other projects took priority and it remained waiting reproachfully in a prominent place in the linen cupboard. This week, when I finished the Remembrance Poppy, I bit the bullet and got the quilt out - it is, after all, only a couple of months to the return of Winter. 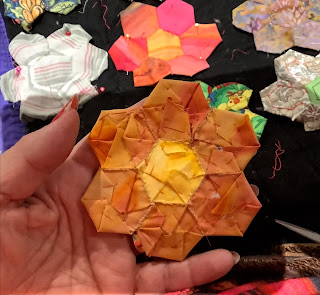 The appliqueing of the hexies was the easiest of the required tasks. The most tedious part was removing the tacking and the papers before they could be appliqued. Aside from the paper hexigons, that task produced lots and lots of tiny threads that refuse to budge from the hexie, or cling to the black background, or litter the carpet.
My ort pot was put to good service!
Fortunately, because these have been folded for ten months, they hold their shape when the tacking and papers are removed 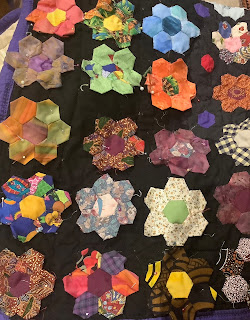 meaning I could place them on the quilt with a couple of pins to get a layout without them coming apart. 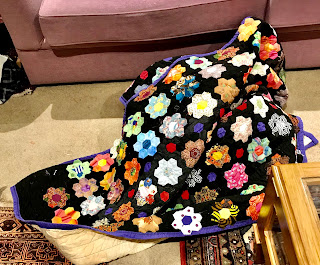 While the actual stitching on of the hexies is easy, and a task for doing in front of TV, the manipulation of the fairly heavy quilt, with hexies pinned to it, was more challenging.  It's also not a project to carry around with you! 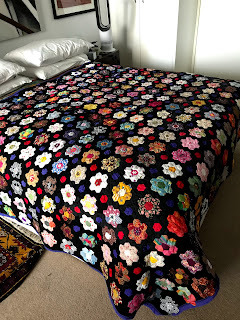 All in all, I'm pleased to have it finished. Originally, all the black hexies had either a red or a purple hexie in the centre. This is more difficult where I have appliqued the hexies, as the remaining black background is not always perfect hexagon shape. I also need a bit more red fabric and possibly some purple too. I am not worrying about this at the moment. I will look into it and count the numbers needed once I have the quilt on the bed for Winter. That might be an improvement for next year.
Posted by Jillian at 1:16 PM

That is absolutely stunning, Jillian! I'd love to have that quilt on my bed.

Thanks Lyn. I reckon it will be a couple of months before the temperature drops enough to use it, given the current forecasts - but I do look forward to it.